Thanjavur, also known as Tanjore, located in Tamil Nadu, is nick named as "Rice bowl of Tamil Nadu" and a great pilgrim destination of South India. It was the capital of Chola kings who ruled the region during 9th to 13th centuries. Thanjavur is also famous for bronze sculpture and painting. During the Chola Dynasty, who ruled South India and many other neigbouring areas, the Chola Kings had built many famous temples and some of them are recognized as UNESCO World Heritage sites. These temples are examples of supreme brilliance of Indian architecture.

Brihadeeswarar temple is one of the great living Chola temples. It is located in the heart of Thanjavur city in Tamil Nadu, India. It was built by King Raja Raja Chola I in the 11th century. There are three main gopurams (towers) for this temple.

A Brief About Brihadeeswarar Temple, Thanjavur

Brihadeeswara Temple is also known as Big Temple. The architectural style of Chola kings is marvelously displayed in the construction of BrihadeeswararTemple. It is a homage paid to Lord Shiva. The temple tower known as vimana of this temple has 66 meters height and it is the larges temple tower in the world. The rounded temple structure is believed to be constructed out of carving on a single stone. The huge black bull (Nandi) in the front is in 13 feet in elevation and 16 feet in length. The other most interesting sculptures are Shiv-Parvati, Ardhanareswar (man-woman manifestation of Lord Shiva) and Ganesha.

In the year 2010, Brihadeeswarar temple completed in 1000 hours and the event is celebrated with great pomp and show.

This great temple is widely visited by both domestic and global visitors.

How to go to Brihadeesvara Temple, Thanjavur

By Road- Many bus services (Both government and private ) are going to this place regularly. You can also get Uber taxis and autorikshaws. 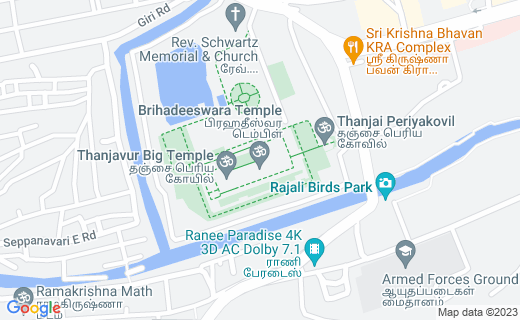 A Brief About Gangaikonda Cholesvar Temple

This temple is called Brihadeeswara temple at Ariyalur and referred as Arulmigu Pervudayar Temple and Big Temple locally. This magnificent temple, dedicated to Lord Shiva, was built by Rajendra Chola I (son of King Raja Raja Cola) in 12th century after his victory over the northern part of India. After his victory, the king brought the holy water from River Ganga and added in the reservoir. Hence the name Gangaikonda cholapuram. The distance from Brihadeeswara Temple at Thanjavur to this temple is just 70 kms.

The 9 storey temple tower has a height of 185 feet. The temple follows the style of Brihadeesvarar temple, but there are considerable differences in the architecture. Here, Lord Shiva is worshipped as Lingam, and this lingam is the largest lingam in the country. It measures 18 feet in height.

Regular pujas are performed here and festivals are also celebrated every year. King Rajendra Chola I shifted his capital from Thanjavur to here and remained the capital for 250 years of Cholas. That time Gangaikonda Choleswaram was a flourishing city, but today it just remains as a historical village.

By Train - Ariyalur and Chidabaram

By Road - Gangaikonda Cholapuram is on NH 227 from Chidambaram till Trichy and is well connected to other parts of the state by buses and roads, and 35 kms from Kumbakonam. 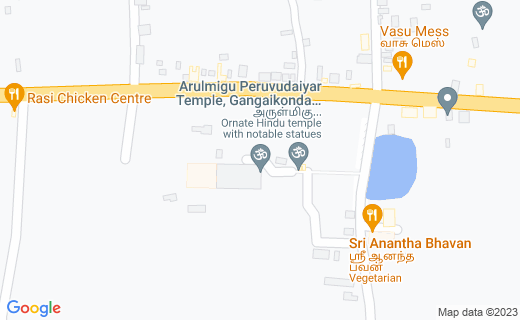 Timing of the Gangaikonda Cholapuram Temple

A Brief About Airavatesvara Temple at Darasuram, Kumbakonam, TN

Airavatesvara temple is the third of the trinity great living Chola temples in India. This temple is also dedicated to Lord Shiva, built by Raja Raja Chola II in 12th century and is a UNESCO World Heritage site.

The temple theertham (pond) is called Yamatheertham. According to legends, Lord Yama worshipped Lord Shiva who is known here as Airavatheswara, to get rid of his curse and he became alright. Since then this pond is called as Yamatheertham. The temple has a chariot structure and several other shrines are also there. However, the shrine of Periya Nayakai (Goddess Parvati), consort of Lord Shiva is housed in a detached temple.

According to the inscriptions, the temple premises was much bigger than what is seen today. There were sapta veedhis (seven streets) and seven courts, Over the period many parts were destroyed.

How to go to Airavateswara Temple, Darasuram, Kumbakonam

By Air : Thiruchi International Airport is 87 kms away

By Train: Kumbakonam, 5 kms away.

By Road: Kumbakonam Bus Stand is just 5 kms away. 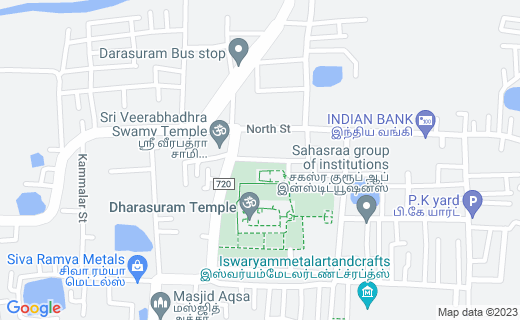 Timing of Airavatesvara Temple near Kumbakonam

If you are interested you can buy silk saris from the weavers directly. They are just near the Airavareswara temple. You can get these saris for much cheaper rate than the market price.