Atlanta has long been known for having great public spaces, from the Olmsted Linear Park on Ponce de Leon Avenue, to downtown’s Centennial Olympic Park, to the Freedom Parkway’s six-mile greenspace embracing the Jimmy Carter Center.  Less well-known are the city’s suburban green spaces—though Gwinnett County, on the Northeast side of  Metropolitan Atlanta, probably shifted that perception somewhat in 2008, when the county won the National Recreation & Park Association’s Gold Medal as the nation’s best Park Agency.  So let’s take a road trip to central Gwinnett and check out three parks on the south side of the county seat, Lawrenceville. 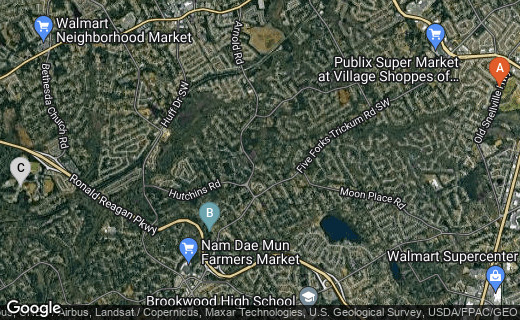 Alexander Park occupies a former pasture just south of the Lawrenceville city limits, adjacent to four bustling lanes of Georgia Highway 124.  The official opening was June 13, 2009, but Alexander attracted visitors even before construction ended, and today you will find strollers, sun worshippers, kite flyers, picnickers, moms, dog walkers and a whole panoply of recreational athletes using it pretty much any time during daylight hours.  Call it an instant hit.

The entrance plaza invites you now, and will only become more seductive as its young trees mature.  There’s a colorful playground—generally in happy use—boasting a special section for children five or younger. The layout leads the eye off toward the pavilions in the middle distance, and the more distant lakeside sheltered viewing dock overlooking Alexander Pond. Those pavilions are great for picnicking, parties, or Recreation Department Seniors activities--one of which appeared to be in progress when I happened by.  (They are also available for rental by the public.) Even  the drinking fountains are thoughtfully designed, offering convenient refreshment not only to humans of all statures but to canine visitors as well!

The open walkways, fields and meadows are balanced with woodland left largely undisturbed.  At wood’s edge I witnessed Bluebirds foraging and squabbling and spotted a Mockingbird’s bicolor tail feathers disappearing into the greenery.  And there’s good reason to suspect the presence of White-tailed Deer in the bottomlands of Pugh Creek along the park’s southern boundary.

To be sure, the sheer newness is still visible here and there.  I saw a crew rebuilding a section of the unpaved trail, evidently fixing the drainage; there were a few areas of failed sod, exposing Georgia’s famous—or infamous--red clay; and of course, many of the trees are still underdeveloped.

But Alexander is a space that has clearly been embraced by the public.  The disk golf course—probably the signature amenity—has a comfortably well-worn look already, and the general purpose area behind the plaza already evokes many a pick-up soccer game past.  People of all descriptions—park users mirror Gwinnett’s highly diverse population--mingle casually.  It may not be Utopia--but on this pretty summer morning it could well pass for it.

Following the sun about 3.6 miles roughly westward from Alexander Park, we come to Ronald Reagan Park, named for the Ronald Reagan Parkway bordering the park’s west side.  If one likens these Gwinnett parks to companion animals, Alexander Park might be a large “outdoor” cat:  well-loved but a bit mysterious, and bearing a scar or two as a badge of lingering wildness.  Ronald Reagan Park is quite different:  a likeable little pocketful of energy, familiar as can be.

It, too, has its signature amenities:  horseshoe pits, shuffleboard and bocce courts for the older set, and a small but well-used skate area often humming with youthful energy as skaters polish their tricks.  At just 25 acres, Ronald Reagan doesn’t really have the space for a great running trail—though you’ll occasionally see runners doing laps of its .75-mile multi-purpose trail—but it’s a good space for walkers.  Its small lake—pond might be a better word—and wooded patches please the eye and moderate the glare of the sunniest Georgia days, but can’t quite escape an essential “tameness.”

As at Alexander Park, pets are not forgotten, and Ronald Reagan Park features a dedicated dog park area.  Also as at Alexander, there are some good picnicking opportunities, including pavilions.  Located just across Five Forks Trickum Road from the local branch of the county Library, and near a major local intersection, Ronald Reagan Park tends to stay busy—perhaps even busier than Alexander.  If it’s a lapdog of a space, it’s obviously one sitting squarely in a favorite lap.

Resuming our westward path, albeit with a slight northerly veer onto the Ronald Reagan Parkway, we need just 3.3 miles to arrive at Bethesda Park.  It’s a big, friendly St. Bernard of a place, welcoming all and sundry to play their favorite games—just don’t call it “shaggy”; this St. Bernard is show-ready.

Bethesda is unquestionably one of the hubs of the Gwinnett park system. It’s 60% larger than Alexander for starters, and the home of more than a dozen sports fields, including some lighted for night play. Soccer, football, baseball and softball all have their places—most of the fields are dedicated to local league play. There are recreational outdoor basketball courts, too. Bethesda Park is definitely a landmark for Gwinnetians belonging to the “sweat set.”

If that’s not enough recreational bounty, we mustn’t forget the aquatic center with its separate “leisure play” and instructional pools.  Unfortunately picture-taking is not allowed, but the leisure pool is quite a sight; there is a profusion of play structures that’s almost intimidating, especially when the water sprays are turned on to welcome the kids.  The instructional pool, by contrast, caters mostly to seniors, with water aerobics and even arthritis water therapy on the agenda.

There’s the outdoor water so beloved by Gwinnett park designers, too: a small lake to beguile the eyes of the walkers circumambulating it on the dedicated walking trail. Runners sometimes use that trail alongside their less speed-obsessed fellow-citizens, but are perhaps a little more prone to crank it up on the 1.5-mile paved multipurpose loop instead. For those seeking quieter relaxations, picnic facilities are available: pavilions, tables, grills. You’ll often spot large groups dining together.

A unique feature of Bethesda is its Senior Learning Center. Gwinnett Parks takes its educational mandate fairly seriously, and one important component of that involves classes oriented toward seniors. Though those classes are spread widely over the entire system, the Learning Center certainly hosts more than its share. Classes range from yoga to Spanish, but possibly the most popular are the exercise and line-dance classes on the one hand, and computer classes on the other. (Evidently, Bethesda’s appeal to the active crowd extends to all ages.) There are more casual recreational opportunities at the Center as well; people drop by to quilt, shoot a quiet game of pool, or just talk.

So there you have it: three terrific parks, each different, each a magnet for citizens in need of recreation, all in less than seven miles. Each has its own character, its own terrain, its own strengths. Each is doing its part to make Gwinnett county more than just an area on a map, lost somewhere between Atlanta and the University of Georgia.