The only existing video footage of Titanic

Whenever we hear of the word TITANIC we associate things like unbelievable, larger than life, an ending unfair for a fairy tale, to it. There's not a single person who woudn't want to undo this mishap. But there's more to Titanic than we know. Here are some facts related to this wonderchild which are guarenteed to stir your imagination.

The first movie made about Titanic was a silent movie named-- Saved From The Titanic, which began filming just after a mere 5 days after the sinking of the unsinkable. It starred Dorothy Gibson who was a survivor of the trip.

The movie released on May 14, 1912 .Many questioned the commercialisation of the disaster so soon when hundreds were still trying to cope up with the nightmare. Ignoring all the criticism this silent drama managed to shine and acquire positive reviews.

But the fate of the Titanic seemed to loom still, for what happened next is considered as one of the greatest losses of the silent era.In 1914, a fire at Eclair destroyed the only known print of the movie.

Milton Hershey, the founder of Hersheys chocolate had made a reservation in the White Star Liner for his return from Britain along with his wife Kitty Hershey. He had booked a first class stateroom with a cheque deposit of 300$. Due to some business requirements his staff asked him to come early so he cancelled his reservation and left 3 days early in a ship named S S Amerika, a German liner.

A replica of the cheque Hershey wrote to the White Star Liner is on display in the Hershey Museum.

3. Titanic Heroes Rewarded With A Bill

The Titanic band members showed heroism when they played on as the ship was sinking, to keep the passengers calm. They came to be known as 'The band which played on'. In return what they got was a disgrace to humanity. The band members were billed by the White Star Company, for the uniforms which weren't returned.

Jock Humes (one of the band members onboard) father received a bill of 5s 4d for his sons' uniform which was not returned. Jock's pay was stopped the moment the ship went down at 2:20 am and the wages owed to him were not sufficient to cover the cost of the brass buttons on his uniform. Moreover when his family asked if his body could be brought back home, they said that 'normal cargo rates would apply'.

Ramon Artagaveytia, a wealthy Uruguan farmer, had survived the sinking of the ship America in 1871, by jumping into the sea and swimming for his life. 41 years later finally he overcame the fear of sailing and decided to sail on the Titanic.

In his own words( in a letter to a cousin 2 months before sailing on the Titanic showing his hope for a successful crossing)-- "Atlast I will be able to travel, and ,above all, I will be able to sleep calm. The sinking of the America was terrible."

Unfortunately he was found among the dead, a week after the disaster.

Morgan Robertson wrote a book named 'Futility, Or The Wreck Of The Titan' 14 years (1898) before the Titanic sank. Surprisingly this book seemed to have predicted the fate of the unsinkable ship. Morgan republished the book after the original accident so that everyone comes to know of his book if by chance they had missed reading it earlier.

Did You Know About This Book?

The Wreck Of The Titan 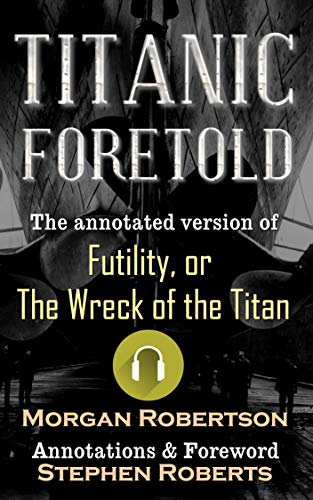 Titanic Foretold: The annotated version of Futility, or The Wreck of the Titan - with Audiobook download
This Kindle edition is a must read to get hold of the details of the eerie similarities between the story and the actual disaster.
Buy Now

6. Did The Titanic Really Sink?

According to some, the Olympic was swapped with the Titanic and sunk in a staged accident, in an attempt to recover the losses of White Star Line caused due to damage of Olympic.

Just a year earlier in 1911 Olympic had had 2 accidents for which the insurance company denied payment citing it as its own fault. At that point White Star Liner was going through a bad financial phase. The conspiracy theory supporters believe that J. P. Morgan executed this plan to save the company from ruining.

The debate is still on but if the conspiracy theory ultimately wins then this would be probably the biggest insurance scam ever. As of now it is yet to be decided.

Do you support the conspiracy theory?

Titanic: The Ship that Never Sank?
Robin Gardiner was among the first few who ignited the conspiracy theory.In this book he shares his view and puts forward strong evidences that supports the believers of the scam .
Buy Now

How many facts did you already know?