As a suburb in the near northeast area outside Portland OR, Beaverton has access to a large number of jobs in the bigger city, in Hillsboro to the west, and within its own boundaries.

According to Money Magazine online, Beaverton is one of the Top 100 Best Places to Live in America. However, it is also one of the most interesting cities, since it is home to NIKE sports company. Nike sits in the unincorporated portion of land inside Beaverton in ashington County and the city has not annexed it.

Nike jumps on the bandwagon of just about all sports immediately as they are invented and often goes viral with them on YouTube.

The very entertaining film below is done in Japanese and English with English subtitles.

I had never heard of "speed golf" until I had seen this video and have found other speed golf vids - but still can't figure if it's a real activity -- But some folks feel the same about Archery Golf. 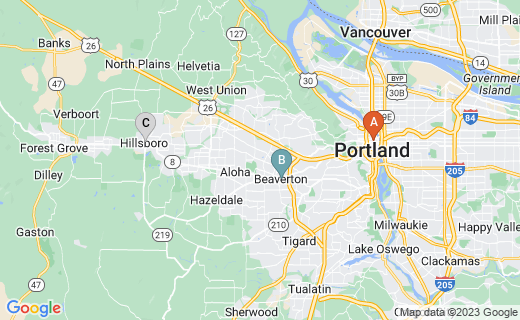 B
Beaverton OR:
Beaverton, OR, USA

C
Hillsboro OR:
Hillsboro, OR, USA

During February 2011, over 32,400 job openings were listed across all Internet sources for Beaverton and Portland. The city reports that Urban Renewal plays a part in boosting nyumber sof jobs in Beaverton since at least 2008. Since that time, plans have been placed and implemented to redevelop the downtown area of the city to draw visitors, new residents, and additional commercial concerns.

An Enterprise Zones (EZ) established under terms of the Federal and State governments helps to Increase Beaverton jobs with a total of 100% of related property tax abated for up to five consecutive years in the EZ as an incentive to purchase or rent business properties. In addition, Electronic Commerce Zones boost eCommerce with as much as $2 Million in property tax credit annually.

Business and residential improvements, along with infrastructure repair and construction are included in an overall larger economic plan that includes Vertical Housing contruction. This  results in mixed-use buildings as we have in Central Ohio. Ours include residential units located higher along the vertical dimension of a complex, with retail, coffee shops, dining, clubs, and movie theaters below. Vertical housing has been built at the "Gateways" of our city, like at both ends of the OSU Campus and other sections of town. Mayor Michael Coleman wants this contruction at each of several Gateways in town.

Vertical housing construction and ownership can offer up to 10 years of property tax credit, very attractive to new or relocating businesses. Such projects have been very successful in Columbus OH and elsewhere. In addition, Beaverton offers Small Business Incentives to those who qualify.

During the Autumn of 2014, the Oregon state government approved the Beaverton to receive and additional Electronic Commerce Overlay region to its four-sector, 4.5-square-mile Enterprise Zone for vital economic improvements.

Transportation is not only extensive in Beaverton, but it is meshed with sustainability policies and safety. Oregon overall is nothing if not green in color and in the sustainability business climate and lifestyle. Walking and biking programs are ever improving and miles of trailways lace the city and country to make it walkable, bike-safe, and green.

Beaverton is located between two airports, Portland International Airport (PDX) and the Hillsboro Airport. In addition, the Port of Portland OR includes four seaport stations that are located close to other means of transport, such as the buslines and trains.

Bus - Train - Light Rail - Streetcar: all at TriMet. This is a far reaching and effective transportation with many options, including ADA accommodation.

Additional passenger and commercial rail transport is available through Amtrak and commercial freight services in Beaverton. The Amtrak Cascades line takes passengers between Eugene Or and Vancouver BC, through scenic areas of the Pacific Northwest. The Coast Starlight line runs to and from Seattle WA and Los Angeles CA, through much of the West Coast. Amtrak's Empire Builder operates eastward and westward among Portland OR, Seattle WA, and Chicago to connect the Pacific Northwest and the Midwest centers.

These centers, along with larger stand alone stores and shops throughout the city are listing job opens in sales and management positions, indicated in the data below. Search "Beaverton OR" in SimplyHired.com.

Companies Hiring in Nearby Hillsboro and Portland

Nike jobs advertised in Beaverton and the surrounding area increased in several significant spikes from 2012 through 2015, with a new upsurge toward a spike beginning in 2015. In March, jobs for Beaverton overall numbers 32,500+ openings. Over 950 or 2.9% of these vacancies were directly with Nike or related marketing and sales companies.

Nike Jobs spike and began a new increase in January 2015

Nike Jobs for Beaverton and America

Best Jobs in Portland and Beaverton