Attractions and Employment in Missouri Along Routes 40 and 66

An Abundance of Best Cities in America Are in Missouri

Missouri is home to at least four of the Best 100 Cities to Live in America.

This status was calculated according to recent business and economic analyses during from 2010m through 2018, and these cities have stayed on the Top 100 List for years.

Between the suburbs of St. Louis on the east and the suburbs of Kansas City on the west, approximately 200 miles of US Route 40 (America's National Road) and highway I-70 stretch between fast-growing metro satellite cities and through additional communities that offer scenic adventures and emerging economies as well.

Number 26 of the Best 100, O'Fallon MO is a growing St. Louis suburb named to the list by CNNMoney.com . Nearby is another St. Louis suburb, St. Peters in the Number 60 slot among 100 American cities that are worker- and family-friendly.

These cities offer jobs, housing that is more affordable than elsewhere in the US, effective school systems, top rate colleges, lower crime rates than elsewhere, increasing sustainability, and a number of other amenities and beneficial features. The Travel and Tourism Industry is also big in this St. Louis metropolitan area.

O'Fallon supports the headquarters for many important corporations, like MasterCard Global Technology and Operations. At the same time, sustainability is a major development here, with at least 400 acres of parkland and green spaces present and improving.

While O'Fallon and St. Peters are near the hub of St. Louis, Money.com's Number 49 City, Blue Springs is near to both Independence and Kansas City MO. There, it offers much variety and travel interest for local residents and for Kansas City Missouri/Kansas commercial and vacation visitors.

Like many larger corridors in the US states, including the Ohio Space Corridor and the Southern States' Space Coast, the area between St. Louis and Kansas City presents residential/business growth and new economic potentials.

Blue Springs advertises low housing costs and lower property taxes than in other parts of the state and nation, with high-achieving schools that produce students in the top scoring percentiles of Math and Reading standardized tests. Related to this is the exciting news that the University of Missouri opened a Research Center here that will benefit from a number of funding streams long-term that will produce new products, services, and jobs.

Many of these elements will likely relate to sustainability, alternative energy, very hot new aerospace endeavors (public and private), bioengineering, and many health & medical services.

Nearby Blue Springs is Lee's Summit,also a Kansas City suburb that is among "fastest-growing" according to a number of popular business journals, and holding the Number 27 slot on Money's Best 100 Cities list. 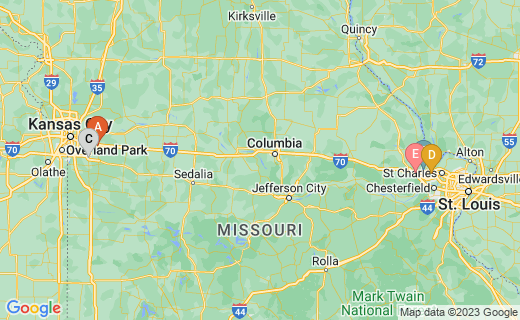 Americana on the Road - Tourist Attractions Between St. Louis and Kansas City

Don't miss the dozens of Tourist Attractions between St. Louis and Kansas City along Route 40 and I-70. Some of the highlights you'll see at the link above on your trip are:

A 225-mile rails to trails bike/foot route (the Katy Trail) parallels US Route 40, too.

Part of the Katy Trail, 225 Miles Through Missouri Along Route 40 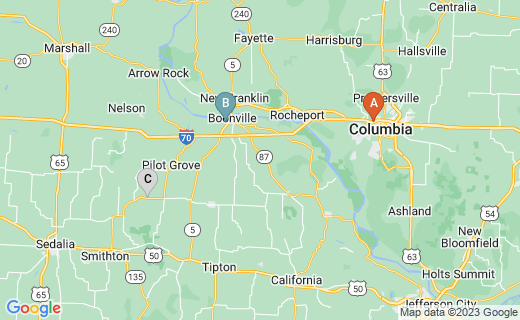 Some popular attractions include:

Springfield and Jolly Mill or Jollification: I-44 and Route 66 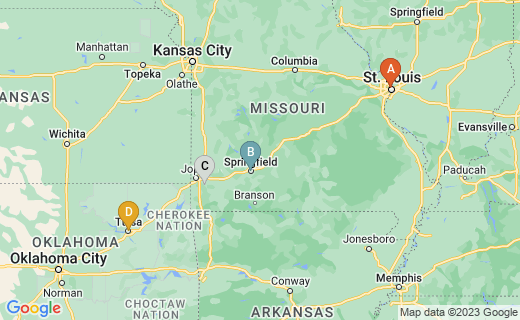 Home of the Springfield Underground industrial park built in caves below the surface of the highway.