Pennsylvania lists one of the largest collection of National Historic Places registered in America. New places in this state are accepted into "Commonwealth Treasure" historic status in an ongoing trend.

Native American villages as old as 14,000 BC make this a rich collection of New World history and particularly Northeastern American chronicling. Many unique installations are replicated this well nowhere outside Pennsylvania. The list below finds them in all four corners of the state as well as centrally located.

Dozens of sites have been registered with the NRHP in Pennsylvania and are preserved and studied with the aid of government and private funding. Many are scenic tourist attractions as well.

Sommerheim Park is a 10-acre archaeologically significant group of six separate sites all within a single park west of the interesting town of Erie. The Erielhonan people of the Iroquois Confederation were the first to inhabit this area.

The park contains all six sites in a rare undeveloped area of the Lake Erie shore, found in Millcreek Township.

The complex includes picturesque Presque Island Bay, where the island is a state park and wonderful for camping, fishing, visiting, and at times, viewing the Northern Lights. Presque Isle is one of my favorite places to visit. Driving in through the entrance onto the lush causeway, you can see the blue waters of the bay on both sides of the boulevard style roadway. The island is a beautiful green space, cooler than the city in summer, and refreshing.

Native American artifacts discovered in the park include those from the periods known as Archaic, Early Woodland, and Middle Woodland; all these artifacts older than those usually found, specifically Late Woodland and newer objects, along the Lake Erie Shores in Ohio and Pennsylvania. 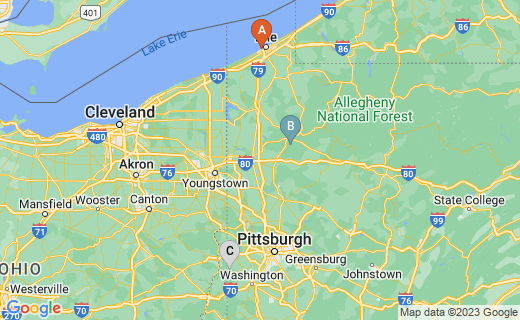 Sommerheim Park is near a major highway and two other parks, including Scott Park and Presque Isle State Park. State Highway 5 is the route across Pennsylvania on the Lake Erie Circle Tour.

Also located in Northwestern Pennsylvania, this site lies along the Allegheny Valley near the unincorporated village of Brandon.

On a huge rock found at this site is a Native American petroglyph, used later as an explorers' landmark. It is also a much studied artifact, although which Native American Nation(s) used the rocks is undetermined. Those pictured in the video above are found nowhere else in the world.

Made of sandstone, the large rock was easily carved with 55 figures in total. These include geometric shapes, and carvings or people and local animals. Some investigators believe the rock and symbols are of shamanic importance and were carved in 1000 AD +/- 200 years.

The first whites to record the existence of the rock and carvings were the French explorers in the area in 1749 that left lead plates to record their adventure and claim to the land. They were Catholic and felt the Native Americans superstitious. However, the rock is first Upper Ohio River Valley petroglyph mentioned in written records.

The US Forest Service recognized the rock as one of the most significant of 75 Native American archaeological sites along the Allegheny River section designated a National Wild and Scenic River.

This archaeological site is located near Avella in western Washington County, Pennsylvania on the border of eastern Ohio and West Virginia and is among several places registered on the National Historic Register of Historic Places.

I find that you can spend an entire week of vacation in this area. Such places are also conducive to the tranquility needed for thought and writing and for painting. This attraction includes the archaeological site, an Indian village from the 1500s, a Frontier Trading Post of the 1700s, and a small town of the 1800s.

A plaque at the rock shelter calls it a deeply stratified archaeological site with deposits spanning nearly 16,000 years (prehistoric/Paleoindian all the way through Late Woodland eras that ended in the 19th Century), but not discovered until 200 years later 1973.

The University of Pittsburgh sent archaeologists to excavate and they found North America's earliest known evidence for human beings in the New World. This is evidence that Native Americans were in Northeastern USA beginning around 14,000 BC, if carbon and other dating schemes are absolutely correct. Evidence elsewhere suggests their presence 50,000 years ago, but this is an issue of heated debate.

Regardless, Pennsylvania seems to be the best crucible for studying Northeastern US Native Americans in history for several thousand years. In fact, the Meadowcroft Rockshelter was declared a "Commonwealth Treasure" for protection and preservation in 1999. Visit the siten and Washington County as a whole is you have a chance. Organized research examinations of this site since 1979 have uncovered prehistoric Native American culture and artifacts from 8,000 years of history from 7000 BC to AD 1000. This is the Middle Archaic through the Late Woodland periods of habitation through about 1749.

The strongest cultural evidence of habitation is provided by Clemson Island people living in the joined river basins of the West Branch Susquehanna River and the Bald Eagle River valleys during the Late Woodland era, but undiscovered until the 1970s. After archaeological excavations, the park was acquired by the Pennsylvania Historical and Museum Commission after setting its borders in 1980. it was registered as a National Historic Site in 1982. 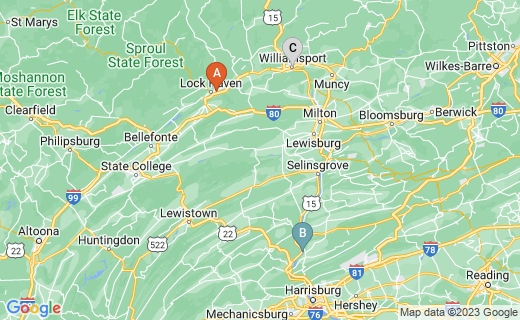 Clemson Island is a sort of prototype for a particular culture or groups of cultures found among Native Americans historically in Pennsylvania and the Northeast United States, although some researchers take issue with this. They feel that it is a "catch all" category for a number of small groups that need to be examined more closely individually.

The Clemson Island site in Central PA is known as a type site and is listed by the National Register of Historic Places as representing Native Americans from approximately 7000 BC through 1749 AD.

The island is preserved as a conservation area that includes a native village. This island site is located and preserved in Halifax Township, Pennsylvania and in on the southern part the island in the Susquehanna River, 20 miles north of Harrisburg on US Routes 11 and 15..

This interesting archaeological site sits on Canfield Island in the West Branch Susquehanna River and east of Williamsport, an interesting town in its own right.

The first inhabitants of this region were undoubtedly some of he earliest Native Americans to migrate from the West, after their arrival in the New World some 10,000+ years ago; and artifacts found thus far on Canfield Island date back to 1,000 BC.

Canfield Island was formed by workers who dug a large ditch at a point inland from the river and then allowing it to fill with water. This separated the island from the rest of the land in the early 1900s. Archaeologists for the State of Pennsylvania visited in 1958 and found evidence of prehistoric "tribes." For 20 years from 1960 - 1980, the state authorized excavations up to nearly 50 feet in depth, bringing up many artifacts. From 1980 - 2010, little has been done to investigate the site further for 30 years.

In the 2000s, at least one research team from a Willilamsport college, Lycoming College, examined the site and found additional useful information.

"What has been extraordinary about the Canfield Island site is the number of fishing nets uncovered. The island, before it was an island, was a veritable fishing colony. Cooking and perhaps some sort of rudimentary industry are evidenced by a large number of large charcoal-containing cooking or burning areas on the island. The amount of charcoal there to study, has been useful in dating other charcoal sites around the state."

Best estimates of Lycoming College and previous exploration teams indicate that peoples from the Early Archaic through the Late Woodland stages lived on what is now Canfield Island and that the Susquehannock Nation (Iroquois languages group) definitely inhabited the area circa 1749, forward.

European settlement quickly grasped the logging and lumber industry to produce a society of millionaire lumber barons in Williamsport, whose mansions are now included on a group guided tour.

This site is located in both Eastern Pennsylvania (Bushkill) and New Jersey (Millbrook). Native Americans that have contributed to this historic site include the Munsee and Shawnee; and may be the most important Munsee Language archaeological site in the US.

The historic eras covered at this site include the Early Archaic through the Shawnee of the 19th Century and are studied by regional colleges and universities -- Munsee is, in fact, an Endangered Language.

See these links for additional information:

Lancaster County in Southeastern Pennsylvania is not only Pennsylvania Dutch Country, settled by the Amish and Mennonite communities after the Native Americans were often displaced or moved westward, but also a site of numerous small Indigenous archaeological sites.

Manor Township, however, is the location of two of the larger installations in which the artifacts found are of sufficient number and quality to date inhabitants to the Archaic through Susquehannock periods. These two sites are:

An anomaly in Lancaster County 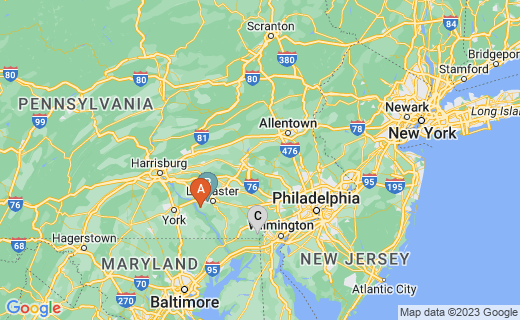