Top 10 Places To Visit In Kerala

Kerala is the southernmost state of India known for its beaches, waterfalls, tea plantations, backwaters, temple festivals, hill stations and wildlife. It is called ‘God’s Own Country’ and is one of the ’10 Paradises On Earth’ as reported by the National Geographic. The lush paddy fields, serene coastline, tranquil backwaters and unique culture make it one of the most sought after tourist destinations on the planet. In this section we list out the top 10 must-visit places in the state.

The Kerala Backwaters is the single most important tourist destination in Kerala which finds a place in every travel itinerary. It is a network of interconnected lakes, rivers and canals forming a labyrinth system comprising over 900km. There are 5 large lakes linked by canals, both natural and manmade, fed by 38 rivers. Vembanad Lake is the largest among them spanning an area of 200 sq.km. The backwaters have a unique ecosystem set forth by the confluence of freshwater (form rivers) and sea water. A variety of life forms including crabs, frogs, mudskippers, terns, kingfishers, darters, cormorants, otters and turtles live in these brackish lagoons. A houseboat could probably be the best bet to soak in the essence of these enchanting Backwaters.

How To Reach Alappuzha

The Kerala Backwaters extend almost half of the coastline of Kerala. Here we will look at how to reach Alappuzha (Venice Of The East), which is the focal point of most houseboat cruise centers.

How To Reach Munnar

Wayanad is situated in the northern regions of the state stretching along the Western Ghats. The bright mountainous region is littered with coconut palms, thick forests, paddy fields, and lofty peaks. The major tourist attractions here include Chembra Peak (2,100m), Neelimala, Meenmutty waterfalls, Chethalayam waterfalls, Pakshipathalam and Banasura Sagar Dam. There are also the Edakkal caves, Jain temples, and wildlife sanctuaries at Muthanga and Tholpetty.

How To Reach Wayanad

The Periyar National Park is one of the finest and most popular national parks in the country. It is famous for its tigers and elephants and also for the jungle safaris. There are over 1965 flowering plants in the park including 171 species of grass and 143 species of orchids. The fauna present include Asian elephant, tiger, Indian bison, sambar deer, Indian wild dog, leopard, barking deer, smooth-coated otter and much more. Several species of reptiles, birds, amphibians and fishes are also seen here in large numbers. The best place to watch wildlife in Thekkady is from one of the watch towers built by the Forest Department.

How To Reach Periyar National Park

Kumarakom is a cluster of little islands on the Vembanad Lake which is part of the Kuttanad region. The bird sanctuary here, home to egrets, darters, herons, teals, waterfowls, cuckoo, wild duck and migratory birds is the major tourist attraction. It spreads over an area of more than 14 acres and came into existence following preservation efforts by the government. Kumarakom is also a breathtaking backwater destination which offers boating and fishing facilities. Houseboat cruises here are an unforgettable experience.

How To Reach Kumarakom

Varkala is famous for its sparkling beach nestled at the bottom of tertiary sedimentary cliffs known as the Varkala Formation. It is the only place in southern Kerala where cliffs are found adjacent to the Arabian Sea. The view it presents is so breathtaking that the Varkala beach is considered as one of the most photographed beaches in the country. The beach is also called ‘Papanasam beach’ (‘Papanasam’ meaning wash away sins) as a dip in its waters is believed to wash away all sins in one’s life. The 2000 year old Sree Janardhana Swami Temple and Sivagiri Mutt, founded by the great Hindu reformer and philosopher, Sree Narayana Guru are also important destinations near the beach.

How to Reach Varkala Beach

Bekal is famous for its Fort and the beautiful expanse of shallow beach near it known as the Bekal Fort Beach. The Fort is the largest and best preserved fort in the state and offers great views of the coastline. The other major attractions here include two sculptures of Theyyam, walls adorned with mural paintings, a rock garden, children’s park and tree houses. The beach, when it gets illuminated in the evenings, becomes a great place to relax and watch the sun go down into the horizon.

How to Reach Bekal

Thrissur is the religious, spiritual and cultural capital of Kerala. Thrissur Pooram, the most colourful and spectacular festival of the state is celebrated here. The Guruvayur Temple, one of the holiest Hindu temples in the country is located 29km away from the town. Other religions such as Christianity, Islam and Judaism is said to have entered the Indian subcontinent through Thrissur. Cheraman Juma Masjid (629 A.D.) is the first mosque to be built in the country. The famous Athirapally and Vazhachal waterfalls are also close by (just 60km from Thrissur town).

How To Reach Thrissur

How to Reach Kovalam Beach

Fort Kochi is the regarded as the ‘Gateway of Kerala’ with influences of almost all the European colonial powers of the bygone era. It has architectures, churches, art galleries, spice markets and historical sites marking influences of Arabs, British, Dutch, Chinese, and Portuguese. Some of the main attractions here are Fort Immanuel (Portuguese - 1503), St. Francis Church (Portuguese - 1503), Bishop's house (Portuguese - 1506), David Hall (Dutch - 1695), Cemetery (Dutch - 1724), VOC gate (Dutch - 1740), Thakur House (British), Bastion Bungalow (1667), Old Harbour House (1808) and Santa Cruz Basilica (1558). St. Francis Church is the oldest European church in India, built by the Portuguese in 1503. Vasco-da-Gama was buried here and his tombstone can still be seen.

How To Reach Kochi 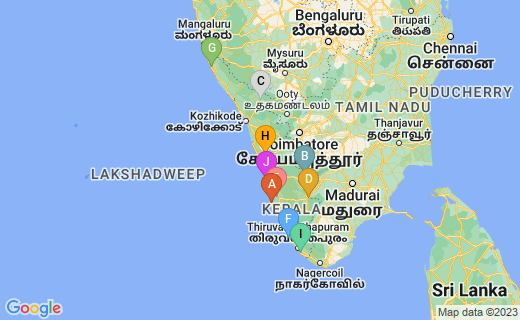