The many Pirates of Baltimore easily outpace those of Disney World or the movie house. They have a long history here, because once Baltimore became partially civilized in the 16th Century, it became a seaport and a shipyard. Sailors and clipper ships ruled and privateers and pirates found fertile grounds for their own livelihood before the American Revolution. With the advent of that conflict, the area became even livlier.

In fact, one crew lives and works as privateers up and down the Atlantic Coast today, but in Baltimore's Inner Harbor, this, the Vigilant Crew may kidnap you for fun! They participate in a special piratey local gathering each spring as well, drawing the seaworthy and the landlubber alike. It all gives Living History in the area far more life.

A big part of Baltimore's Fells Point historical district with its many attractions, another crew ensures that you're never safe from priates on a jaunt down to the harbor. They're a lively bunch and they'll dress and make you up to look just like them. You'll learn to walk, dance, and talk like a pirate and fire the water cannons on board their ship. Your family may not recognize you after your experience. You may not recognize them!

The Vigilant Crew may kidnap you for fun!

Urban Pirates is a company that hosts pirate excursions for families, school and business groups, adults' Bring Your Own Grog tours, and plenty of other events. Birthday Parties with cake and other special events are accommodated and colorful invitations to match the Good Ship Fearless can be printed from the company website, to surprise your friends and shipmates. In April each year, even more pirates come out of hiding and attend the annual Fells Point Privateer Day.

Privateer Day features a Pirate Invasion, a Living History Camp, some Kidnappings, a seas battle in the harbor, and often provides additional shows, like Roller Derby (a new pirate-y pastime), live bands, a party, and treasure chest of surprising activities.

In addition to all this, surrounding Fells Point is home to some of the other best things to see and do in the nation. The pirates, including sporting teams, are unanimous in that opinion!

Best Record Shop In the World

One of the best places to visit in Baltimore, Maryland is The Sound Garden Record Shop in the Fells Point district. It is incredible. Since the huge store in Toronto closed, The Sound Garden must be the largest and best-stocked place to go for music in North America - and probably the world. They have a great Facebook page, so have a look before you visit.

A Unique And Famous Bakery

Having the bakery featured on the Food Network for ten seasons created a demand for Charm City Cakes’ creations nationwide.

Best Cakes On Television Are In Baltimore

A third place to see is Charm City Cakes, although you will not be able to walk in and take a tour. You can, however, look at the outside of the building, which is pretty interesting.

If you go to the taverns across the street, you may catch a glimpse of the famous crew after work. Their website's 360o panorama and other images present one of the best virtual tours of any establishment that I have ever seen.

To possibly get inside Charm City Cakes, you need to order one of their custom designed cakes for pickup. The minimum price for any of their one-of-a-kind cakes is $1000.00. One-of-a-kind is all they do and they are masters of this craft.

The awesome and unique Chef Duff and his crew are community oriented as well as talented in engineering, fine arts, and cake design. At the end of 2010, they helped Days End Horse Rescue by auctioning a decorating lesson with Duff and Geof. How cool is that? They also made the customized cake for the Get Married In Times Square Contest for New Year's Eve 2010.

Charm City Cake's Geof and Mary Alice have journeyed to Ohio a few times for special event demos and they are friendly and enjoyable. They probably travel to many states in the East and Midwest, so watch your local papers and check the company website for events scheduling.

In 2011, the crew opened a second bakery in Los Angeles.

Charm City Cakes is near Johns Hopkins University, a number of museums, and a bus stop. 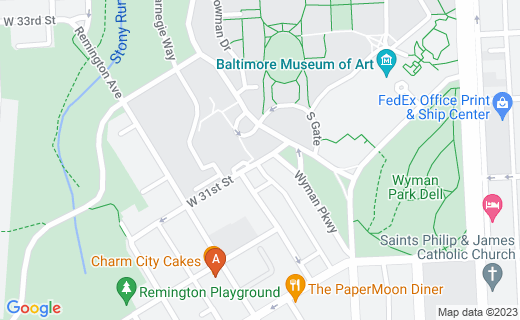 Pimlico: Secretariat at the Preakness; Win of 21 Lengths (2nd race on video)

Pimlico is a famous horse racing track that has been featured in literature, filns, and television programs. The home of the Preakness, the second race in the annnual Thoroughbred Triple Crown, the track is famous around the world. Races are run daily from April through July every year. Admission is very inexpensive and public transportation by bus is conveniently located nearby. However, 12 parking lots will hold nearly 8,000 vehicles.

There is plenty to do and see at Pimlico, with facility hours from 11:00 AM to as late as 1:00 AM, open every day. Four dining facilities and 750 betting windows are featured, along with a gift shop and other amenities. The Maryland Jockey Club at Pimlico dates back to 1743 - almost as old as the pirate activities in Baltimore. Since the 1970s, Preakness Saturday has been a hallmark of the advent of Spring in Baltimore. 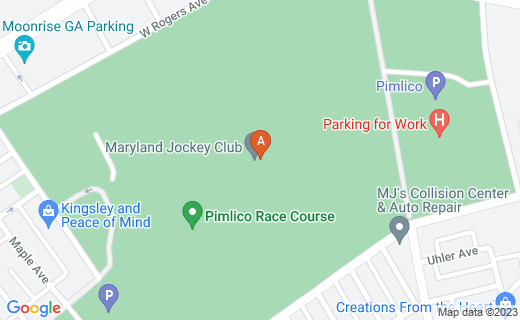 Six official teams and a set of All Stars. Girls on skates are strong and increasing the action in Baltimore. Names like Night Terrors and Fresh Meat give us an idea of what to expect.

Lovers of the Roller Derby of the past are glad that it has returned. In Baltimore, the Charm City Roller Girls go all out in their flat track speciality and crowds of spectators grow in numbers to watch them as they develop their style and winning record. If you were ever a fan of the SF Bay Area Bombers, you'll enjoy watching the Roller Girls. At this writing, the 2011 regional playoffs are scheduled for Baltimore in mid-September. Ticket information is available on the Girls' website. If you ever want to take a training lesson, open skating is offered with the team on a monthly basis (see the website). 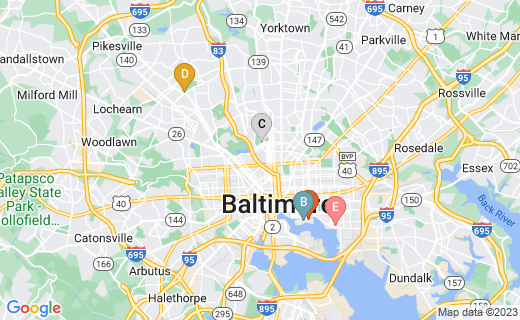 The Babe Ruth Birthplace Museum and the associated Sports Legends Museum at Camden Yards are a set of sports heritage museums close to the arena where the Baltimore Oriioles play at home. For baseball and history fans, this is a perfect vacation trio to be seen together.

The second museum listed above is at Camden Yards and serves as the state headquarters for sports tributes and preservation. Exhibits commemorate the Preakness and Pimlico, the men of the Negro Baseball League, a State Hall of Fame, Babe Ruth, the Orioles and their Hall of Fame, and other Baltimore and Maryland sports teams.

The Babe Ruth Museum just blocks away is an entire building dedicated to Ruth, who was born here in Charm City in this house. 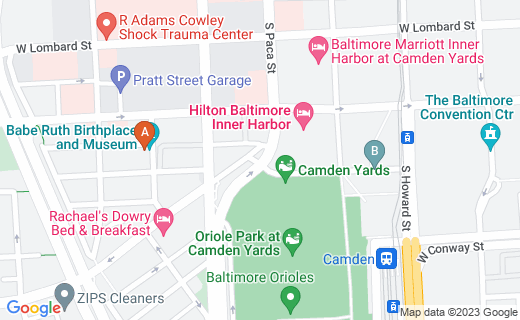 Baltimore is full of Irish history and culture and so, it is home to the Irish Shrine and B & O Railroad Museums at 920 Lemmon Street. Anyone with Irish heritage, interested in Irish history, or fascinated with the American railroad will enjoy this museum. You may not have heard of the large facility yet, since it opened only in 2002, and admission is free. It may not be widely advertised yet.

The museum site contains five alley houses that were built for the railroad builders to live in the 1840s. :Located next to the railroad headquarters of the day, two of the houses make up the museums and the rest are examples of living spaces. The area surrounding Lemon Street is a large historical district preserved and developed by the City of Baltimore and contains other landmarks listed at the link to the right.

These Irish People came to America, or were sent away to our country, to reduce the population of Ireland during the Great Potato Famines of Ireland and Scotland. many history theorists insist that the famines were engineered for an excuse to offload poorer citizens to the United States.Along with the Chinese workers, America Railroading was glad to have these workers. In the early 21st Century, we see an increase in historical installations and monuments of tribute to the Irish people and to their contribution to the railroad system that facilitated business and economic growth pre-and post-Civil War.

Visitors to the southwest part of Baltimore can enjoy the Irish Heritage Walk that includes the museums, the major church of the area, the living history of the Irish alley houses, a local market that is still open for business, and other sights. All connected tours and walks are free of charge. 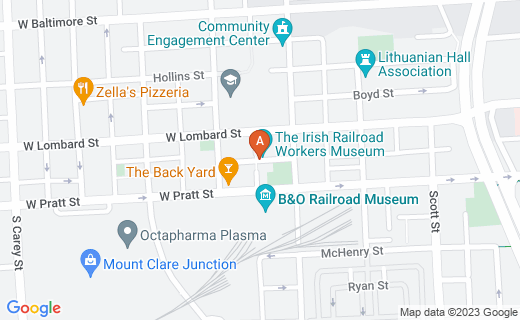 Included are several historic public markets and food sampling of traditional dishes. Mew chefs in the area are delighted to offer tourists their new dishes as well. Ethnic Food Tours cover most of the ethnicities historic to Baltimore and provide a range of cuisine to enjoy.

The Fells Point Tour alone offers foods from Polish, Greek, Jewish, and Irish cultures at family owned shops, along with the famous black and white cookie.

The tour company also sponsors a line of culinary events around the year. See the link to the right for more information.

The Baltimore Shakespeare Festival is a regional event and company for professional classical theatre and educational programs. Since 2003, BSF has been an official Small Professional Theatre under Actors' Equity. The company presents outdoor performances in the spring and summer at Meadow at the Evergreen Museum & Library. At least three indoor performances are schedule yearly as well.

In 2011, the National Endowment for the Arts (NEA) and Arts Midwest's Shakespeare for a New Generation program adds to the high school and middle school artist-in-residence training offered. This honor is afforded to only 37 theater companies in the country, making Baltimore one of the best.

Auditions are announced regularly in the community and ticket prices are inexpensive to moderate. 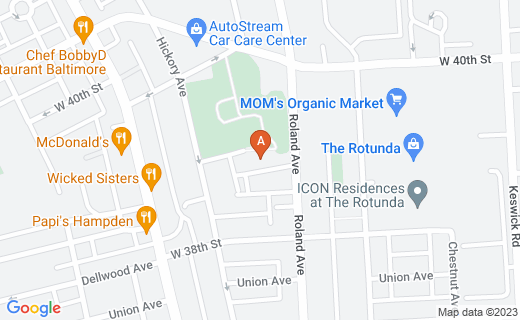 In 2010, the phantom yearly visitor to Edgar Allan Poe's grave did not appear. There were no roses and cognac left in tribute of the author for the first time in 61 years.

This absence sparked increased interest in the Edgar Allan Poe House and Museum, as staff and guests continue to discuss what happened to Poe's faithful late night visitor.

An annual birthday gala is held every year to pay tribute to Edgar Allan Poe, his works, and the actors who have portrayed his characters - especially Vincent Price. It is a large production and visitors enjoy it. Poe's bicentennial birthday celebration in 2011 was huge.

The Poe House and Museum is quite interesting and its website provides a list of titles and dates of the works written within the home by Edgar Allan Poe. Romantically, he often wrote in an upper garret that can be visited.

If you have time after your Top 10 Places visits in Baltimore, enjoy the Fells Point Ghost Walk as an added bonus. Just about everything is happening in Fells Point! 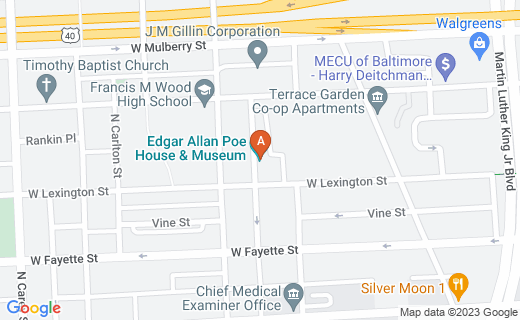 Just about everything is happening in Fells Point!