Insulated from Recession and Jobs Increasing

Charlotte - Mecklenburg labor market or Workforce Development area is a prospering region with many attractions to fuel tourism and related industries involving retail, food service, accommodations and others. Healthcare is also a big market contributor.

Being a Smart City, a significant percentage of its population has earned at least a Bachelor's Degree or higher, not to mention all the Associate's Degrees (AA, AS, etc.) and educational certifications of those that do and do not possess the BA/BS. as a college town, Charlotte is very bright educationally and economically and this keeps it somewhat above the fray of economic downturns and recessions.

All this is not to say that some jobs were not lost in the 2008 - 2010 US recession, but Charlotte was not devastated by that timeline of events and the numbers of jobs listed for the market area increased overall from 2005 - 2009 and significantly from July - October 2010. This was in time to experience even more job listings resulting from the 2009 Holiday Season. By July 2014, Charlotte enjoyed job listings of over 58,400 employment vacancies.

The City of Charlotte in Mecklinberg County was named a year previous to its founding to honor the mistress of King George III of England during colonial days. This was Charlotte, or "Princess Charlotte of Mecklenburg-Strelitz" a German woman of royalty that married George.

This is a reason that the city is called the Queen City. However, during the Revolutionary War, so much dissent and rebellion was given the British by the American Colonists, that the city became known as The Hornet's Nest - much in keeping with the US Naval Jack motto Don't Tread on Me. Colonials that felt English rule to be abusive would not submit to defeat and became like dangerous members of the animal world to the Redcoats.

The city started out as a trading post and fort near the Catawba River, constructed at the crossing of two Native American pathways. The Charlotte area became a gateway for travel from the north to the south for new settlers and remained so, leading to a health Travel and Tourism Industry today. Wagon trails, railroads and a railroad hub, major highways, and finally airports locked in transportation revenues and opportunities.

Some settlers stayed on in Charlotte in stead of moving on and built a number of churches of different denominations, leading to another nickname - Church City. In the 21st Century, numerous organizations and publications have names Charlotte a Best City as well - best place to live, best place to begin a new business, and many others.

Adding to the church city reputation, world famous evangelist Billy Graham was born in Charlotte. A large library in the city is a tribute to his work around the globe.

I-77 Corridor Through Charlotte 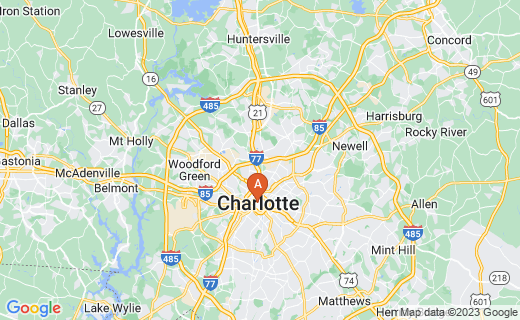 The long-term most frequently listed positions are:

Joba are Increasing in the Research Triangle 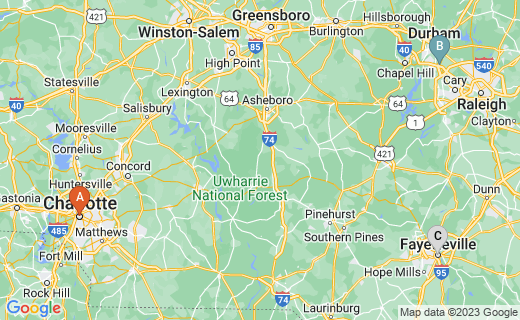 These companies maintain the largest employee groups in Charlotte:

Charlotte is certainly a college town, given the number of high quality universities and colleges in and around the city. Higher education facilities often draw funding, research professionals, and new businesses into a city, thereby creating new fields of work and additional job listings for residents. Students are drawn to such cities and often stay on after graduation.