Proud to be an engineer, Mazlan loves to share the engineering marvels in Asia and other parts of the world.

Best Subway In The World

In terms of world ranking, Asia is also home to the world busiest metro system, top mass transit system, most crowded subways, futuristic and cleanest subway, etc. The list can go on.

On the opposite end of the scale, it also has its fair share of listings.

But not all these superlatives translate to efficient and reliable subways, factors that are important to commuters.

On these criteria, Asia is also in the Top 10.

In this series, I will cover Tokyo Subway and Hong Kong MTR.

Asia saw its first subway in 1927 when Japan opened the 1.37 mile (2.2 km) GINZA subway line linking Asakusa and Ueno, the two districts in Tokyo known for its cultural sites.

It has now expanded to 13 lines and 290 stations and operated by two companies, Tokyo Metro that has nine lines, and Toei Subway that has the other four lines.

The Busiest Subway In The World

Tokyo is currently the busiest subway in the world with more than 8.7 million people ridership daily and it is also one of the largest subway systems in the world.

It also ranked highly in terms of efficiency, reliability, safety, and cleanliness.

Despite the complicated mesh and size of its metro and commuter lines (see Tokyo subway map below), Tokyo subway moves its 35 million people efficiently. But it can be notoriously crowded during peak hours. In fact, it is overloaded by more than 100% of its designed capacity. On some lines, it can be as much as 190%.

If you are one to experience something different and be caught and squashed in Tokyo subway rush hour, then this is it. You might even be pushed by those men in white gloves also known as Oshiya or ‘pushers’, into the crowded trains. The maddest place to experience this is at Shinjuku Station. Have fun!

There are also cases of women commuters being groped during these rush hours. To ensure their safety, Tokyo Metro introduced women only carriages and you will know them from the pink signs on the platform and in the carriage.

The Greater Tokyo Area with a land area of 240 sq. miles (622 sq. km) is not fully accessible on subways alone. You need a combination of buses, trams and the urban Japan Rail (JR) lines, especially the JR Yamanote Line, to have full access to this huge metropolis.

However, the subways cover most of the tourist areas and Tokyo’s city center. Unless you want to explore Old Tokyo and the suburbs, the subways are good enough for your travel plan.

There are several types of tickets available but generally, day passes ticket is expensive as it does not cover all the subway lines.

If you are a tourist, the new Tokyo Subway Day Passes Ticket will let you travel on both metro networks and sold at the Tokyo airports only. Introduced on April 22nd, 2014, this is a better option than the normal day pass tickets sold at the subways.

Suica and Pasmo are prepaid cards issued by two different companies. Both can be used for all trains, subways, and buses in Tokyo and at selected stores.

Before leaving Japan, bring the used card to the ticket office for the deposit refund and any unused portion, less service charge.

Although there is no discount on the prepaid card over regular tickets, it offers the convenience especially when you are in the congested Tokyo subway stations.

The Tokyo subway starts early at 5 am and depending on the line will ends between midnight and 1 am. It does not run 24/7 as it needs the downtime for maintenance.

Besides rail transport services, Tokyo Metro also develop assets on its idle land and areas within the station premises. This includes office buildings, hotels, housing, golf driving range and rental storage space. It also has the retail related business, advertising and IT business within its subway stations.

At the time of writing, only the 2010 financial reports (in English) are available and its consolidated net profit after tax is US$380 m (¥ 38,567 m). It may not be as spectacular as Hong Kong Metro's financial results, but it is an impressive performance for a Japanese company as several other Japanese companies are losing money. (Japan Airline, Japan's electronics giants Sony, Panasonic, Sharp are some examples).

Unfortunately, financial results for Toei transportation is not available in English.

Although there are talks of merging the operation of these two entities, it is still far from realization.

Tokyo Metro's operation and maintenance expertise is very much sought after and has now formed technical cooperation and assistance for Hanoi Metro Company, which began operation in April 2017.

It is involved in the preparatory studies for urban railways in Manila, Philippines and Ho Chi Minh City, Vietnam.

How Asian Subways Compare to Subways in Europe & the USA 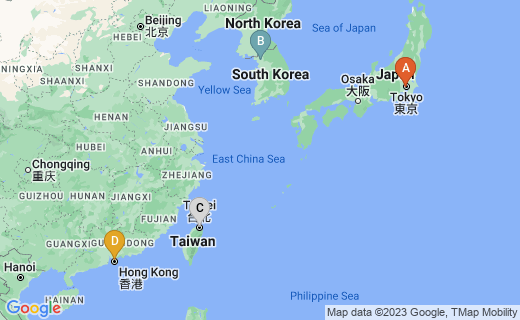 Hong Kong may not be as densely populated as Tokyo but with more than 7 million populations over a tiny area of 426 sq. mi (1,104 km2), its public transport system must offer a reliable and efficient service. And when 90% of all travels within Hong Kong are through its mass transport system, every small details matter.

Surprisingly, Hong Kong Metro or Mass Transit Railway (Hong Kong MTR) managed to offer all these. They are so efficient and reliable that it does not even have a timetable. It has a 99.9% on-time performance and the train arrives and leaves every minute.

As of 2016, Hong Kong MTR has now expanded to 230.9km of track line and 93 stations. The 'Express Rail Link' connecting Hong Kong to Shenzhen, Guangzhou, and 'Shatin to Central Link' which are under construction will add another 43km route length to the overall Hong Kong MTR network. As of mid-2017, these projects are about 94.3% completed.

Ridership has also increased from 85,000 a day to about 5.59 million people ride daily (2016 figures for Hong Kong only, excluding the China Mainland lines).

Hong Kong Metro is also one of the few rail companies that are profitable. Based on its 2017 Interim Report, for the half year ended 30th June 2017, it made an unaudited profit of HK$7.533b. In 2016, it reported a net profit of HK$10.254b. These are impressive financial performances for any company in the world. Their integrated approach to rail operations and developing properties on its railway assets make all these possible.

Providing good user experience is crucial to MTR’s success. The Hong Kong Octopus Card payment system, a contactless stored value card, can be used not only on the subways but also on tramways, buses, vending machines, convenience stores and even at restaurants. The ease-of-use and acceptance at many establishments creates commuters’ loyalty and continued patronage.

In addition, you also get the following goodies:

If these are not enough, you can even return your Hong Kong Public Library books at the Book Drop at any of the three MTR stations.

These are some of the reasons why Hong Kong MTR is one of the best-run metro and top railway operators in the world.

Hong Kong is Top in The Urban Mobility Index Study

This Index compares 84 cities around the world on its mobility trends and how it manages the various public transport mobility challenges, now and for the future.

Even with any well-managed corporation, hiccups do happen.

In 2013, there were several service disruptions and in early 2014, a power failure at one of the subway lines disrupted services for nearly five hours.

This prompted the Transport Ministry to consider salary cut and linking MTR's directors' salary to the company's service performance.

What matters is how the company managed this risk and the effectiveness of their contingency plan.

Surprisingly when surveyed, 40 percent of the respondents were not happy with how MTR handled the incidents. 60% were dissatisfied with the contingency plan of alternative transport arrangement. However, they were satisfied with how the MTR's staff handled their grievances and there was sufficient signage in the stations.

(Although Hong Kong MTR is a public listed company, its majority shareholder is the Government of the Hong Kong SAR (through The Financial Secretary Incorporated))

MTR had ventured beyond Hong Kong and are now in mainland China, Australia, Sweden and the UK.

In 2016, it carried 1.80 billion passengers in the six cities outside of Hong Kong over a total track line of 960 km.

Between Tokyo Subway & Hong Kong MTR, which you think provide the better facilities

The similarity between Tokyo Subway and Hong Kong MTR, besides providing efficiency, reliability and cleanliness are listening to the commuters.

They provide the small details that matter to the users and this, in turn, translate to positive passenger experiences. Even tourists that use the services go away with high praises.

We will now move to the second part in this series that look at how Seoul Subway and Taipei MRT make it to the top, not only in Asia but in the world's best Metro and subway list.