Psst! Don’t tell anybody, but there are still authentic romantic medieval castles that you can spend the night in, just like in a Cinderella or Sleeping Beauty fairytale. No, we’re not talking about Disneyworld or that German castle poster, but the real thing! Most of them are insider secrets your travel agent doesn’t even know about. If you’ve always dreamed about finding out what it would be like to stay in a real romantic castle, here is one of the Top 12 Most Romantic Castles that could make your dreams come true.

Staufenberg Castle has a tragic but common story which tells of the countless fates of so many medieval castles, destroyed by the hopes and dreams of ambitious royalty who lost everything. High on Staufenberg hill is what is left over of the upper Staufenberg Castle, which was built sometime around the end of the 11th century. Originally it was a pair of castles, the upper one (now ruins) and the lower one (now the hotel). It once belonged to the proud Gottfried VI, the young Count of Ziegenhain and a Sheriff of the Fulda Abbey. Gottfried was barely more than a boy when this happened, and all because of his mother. As a regent, she arranged a marriage between the Duke of Hesse’s daughter, yet swore an oath to support the Duke’s enemy, the Bishop of Mainz in the hopes of keeping her son’s father-in-law from taking away their kingdom. Sadly, Gottfried sided with the losing side and his castles were completely destroyed by the Duke of Hesse in 1273.

The lower castle was renovated and fortified in 1450 when it was inherited by the Duke of Hesse-Darmstadt, but also destroyed in the 30 Years’ War in 1648. After that, it lay in ruins until 1860, when the Duke of Hesse-Darmstadt decided to renovate what was left of the lower castle, and turned it in a 19th-century palace with medieval character. It was rebuilt in Victorian romantic style. You can tell when a castle has been rebuilt in the 19th century whenever you see a tower that looks like a chess-piece rooks. The castle was turned into a hotel in 2002, and since then has been trying to return to its medieval roots.

How Do I Find It? 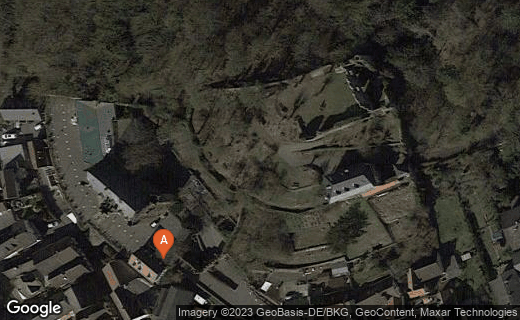 Some people love the romantic idea of staying overnight in a medieval castle, but at the same time, they expect the same level comfort and amenities you would find in any top-of-the-line chain hotel. As a friend of mine once put it, “I think it’s cool to stay overnight in a castle, but I’d rather not sleep on Sir Lancelot’s old mattress.” Staufenberg Castle Hotel offers you exactly that.

Staufenberg Castle Hotel is a four-star quality hotel, which includes extra-comfortable beds and modern adjoining bathrooms. The décor has a medieval-like affair but without the “oldness”. The better rooms offer a view overlooking the picturesque Lahn River.

This hotel offers all the services you would expect in any large four-star quality hotel, such as room service, extra insulation against noise from adjoining rooms, soundproof windows, tobacco-free in the entire hotel (except the smoking areas), laundering & pressing service, digital television and room phones and free WLAN in most of the rooms.

How Much Do Accommodations Cost in Comparison?

Prices per room for 1 night and include breakfast.

This hotel belongs to the Dr. Loher chain of hotels, and they have their own app you can download for booking this hotel. It makes it easier to book this hotel online, even if you only use this app just once in your lifetime since you can book exactly the room, meal, package or extras you want. You can also take advantage of securing a booking-security-voucher. This voucher allows you to cancel with a partial and/or full refund, and receive compensation in case the hotel if by some strange incidence of bad luck, messed up on your booking.
If you don't want to use the app, you can contact the hotel directly here.

The Staufenberg Castle Hotel offers a wide variety of packages; not just romantic packages but also family and business seminar packages. But the package that would interest romantic couples the most would start with the Romantic Weekend Package. This package offers a weekend deal starting at 200 € (110 € for a single night) per person and offers the following:

TIP: If you didn’t book a romantic weekend deal, please be sure to make a table reservation – especially on the weekend, because this restaurant is very popular with the locals.

The Staufenberg Castle Hotel offers creative continental European cuisine. In addition to fresh seasonal specials on the menu, they offer something for everyone, including meat, fish, poultry, salads, soups, vegetarian dishes as well as children’s menus.

If, by chance, you check with the reception, they might be able to book you with a group Medieval Feast (minimum 8 persons), which serve 4-5 course menus with dishes such as “at one time the flesh of the sow upon cabbage in cream handed to thee with lumps of boiled bread” (pork chops with creamy cabbage served with dumplings) or “oxen rolls served with sotted vegetables and meal of spuds” (beef roulades with cut vegetables served with mashed potatoes).

The restaurant offers you impressive surroundings of a rustic knight's formal dinning hall, including fireplace romantic. It continues downstairs if you enjoy the medieval dining experience in the castle cellars. . If weather permits, you can dine on the castle's terrace, with an impressive view of the Lahn River.

Marburg is famous for a number of things. It's one of Europe's oldest cities. Excavations have shown that people have been living here for at least 50,000 years, though Marburg officially became a city in the 9th century, and the birthplace of the State of Hesse.The Duke of Hesse-Marburg can still be visited today. It's also home to Saint Elizabeth, who founded a hospital, which later became the church. Its university was founded here in 1527... and the Grimm Brothers spent a great deal of time here collecting local folktales.

Tour of the Old Town

Bring your walking shoes if you would like to walk through the crooked houses and streets of Marburg's older town, and learn about the famous sons & daughters who once lived here. The Dukes of Hesse, the peasants' uprising, Martin Luther, Saint Elizabeth and the Grimm Brothers.

Tours are held on the first Friday of each month from April to October for 11.00 € per person.

Romantic Picnic on the Lahn River

Perhaps your tastes run more romantic, in which case you won't want to miss a picnic abord the Elisabeth II, a carefully restored oldfashioned Lahn riverboat. The boat hires out for a picnic at 72.00 €/hr (including boat pilot) The gourmet lunch runs at 29.00 € per person, and has a choise of Hessian, Italian or Spanish specialties. If you decided to go as a group, you can hire the boat with up to 11 people.

If you just want to ride abord the Elisabeth, the boat takes tourists for 7.50 € per person.

The Wilhlemshöhe Museum & Park Center in Kassel is a UNESCO World Heritage Site, and well worth the visit, especialy on days where you can get a view of one of the largest, most spectacular manmade waterfalls ever created. In addition to the park the museum (which hosts the world-famous Documenta exhibition every decade) has beautiful works of art to view. You can find more information here, at the Kassel Cultural Museum site.

Compare This Romantic Medieval Castle to Hotel to the Other 12