An Introduction to Indonesia

Indonesia covers a vast area in South-East Asia and is comprised of more than seventeen thousand islands, a great many of which are uninhabited. The most popular overseas visitor destination is probably still Bali, which is widely perceived as being one of the world's top island paradises. Sadly, as is so often the case with unspoiled destinations which reach a certain level of international visitor popularity, Bali is in many ways no longer the tropical paradise it was in earlier times. This means that visitors to Indonesia now have to look a little bit further if they are to enjoy this magnificent archipelago to the full and see the very best of the natural, unspoiled beauty it continues to offer in abundance.

West Papua is one such potential visitor destination. Prior to the year 2000, West Papua was known as Irian Jaya and is still commonly labelled as such on many maps. The region forms the western part of the large island of New Guinea, which sits to the north of Australia. It should be carefully noted that the eastern part of New Guinea is a separate, independent country, known as Papua New Guinea. 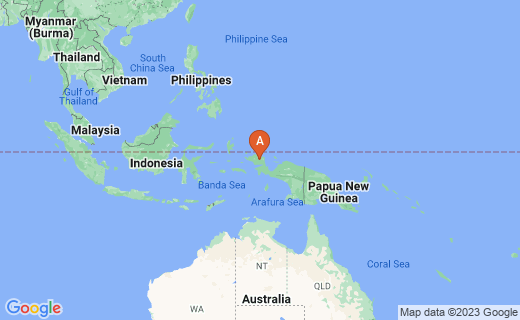 As your flight to West Papua comes in to land at the region's capital, Jayapura's Sentani Airport, you will get wonderful views of West Papua's largest lake, its islands and its surrounding hills and forests. Lake Sentani is about seventeen miles long, up to eleven miles wide in places, and is of an extremely irregular shape. There are many small villages dotted along the shoreline of the lake, some of which are only reachable by boat. The people earn a living mainly from fishing and sago harvesting, and in many instances, live in houses built on stilts, over the water.

It is a beautiful, interesting and amazingly quiet and peaceful area to visit. Attempts are being made to extensively promote the area to international visitors, however, and a lot of money is to be invested. This sadly means that future visitors may be lucky to see it still in its totally unspoiled, natural state.

There are several types of fish in Lake Sentani but the large sawfish which could grow to over 10 feet has not been spotted in the last thirty years and is widely believed to be extinct. It can now only be seen as a motif on the traditional Sentani artwork offered for sale by the local people. 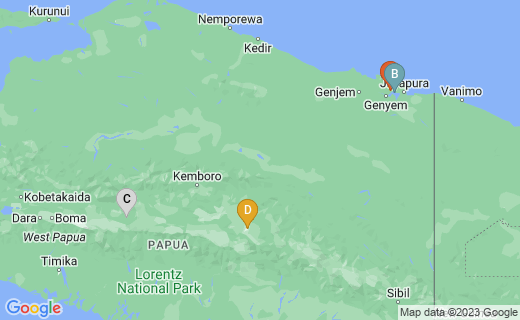 The Baliem Valley is sealed off from the rest of West Papua by high, rugged mountains. This means that access is only possible to the region by air, from Jayapura to Wamena, the valley's main town. The flight takes less than an hour and should be included in your West Papua tour costs.

It is imperative that you be extremely open-minded when flying to and from Wamena Airport. If you are expecting anything remotely resembling JFK, LAX, Heathrow or the likes, you are in for a big shock! Tickets are purchased on demand and are hand written at the time. There are no security checkpoints, or indeed any forms of security controls. The whole experience is more akin to getting on a commuter bus or train, rather than what you may expect at a commercial airport.

The town of Wamena is a market town and is home to around ten thousand people. It is also, because of this, a gathering point for people from all surrounding areas, as it is frequently their only source of those supplies which they cannot produce themselves. It is more than worth having a browse around the market and any small pieces of candy/sweets that you happen to have will be much appreciated by the friendly, local children.

It is more than worth trying to get booked to stay in The Baliem Valley Resort. This is a hotel which lies high up in the mountains, about thirty minutes' drive from Wamena and affords beautiful views across the valley. Accommodation is provided in individual, grass-roofed chalets, furnished in local style. They are, however, clean, spacious and comfortable with full facilities.

Once settled in The Baliem Valley Resort, it provides an excellent launch pad for a true, back to nature excursion in to the depths and breathtaking wonders of The Baliem Valley. It is important, however, to make some time for enjoying the wonderful hospitality, delicious food and spectacular views afforded by this magnificent hotel and resort.

The Dani Tribe in The Baliem Valley

There are a number of native tribes live in The Baliem Valley but the largest of these is theDani tribe. Your tour of the region will almost certainly include a visit to a compound where members of the Dani tribe are still living in virtually the same fashion which they have for millenia. You should be prepared to see the men almost totally naked, wearing nothing but the most basic of wooden sheaths, while the women wear only grass skirts.

It is very likely that you and your guide will be met at the entrance to the compound by armed soldiers/police. It is unclear whether this is for your protection, or whether it is to minimise your interaction with the natives and your potential contamination of their primitive customs. As many of these tribesmen have a very recent history of cannibalism, giving them alcohol is particularly prohibited as they may not require much inducement to start a feud with a neighbouring tribe.

You will almost certainly be able to witness the Dani tribe's Pig Festival, where you will see the sacrifice, preparation and cooking of a pig in a pit with hot stones. The pig is a vital form of local currency and you will have paid for the one you see slaughtered as part of the cost of your tour.

Arranging your Trip to West Papua

Visiting West Papua is a very different concept from the type of trip most people are likely to have made in the past. It is vital, therefore, that you find a large, reputable travel company in your own country, with experience of dealing with West Papua, to make the necessary arrangements on your behalf. Any other course of action is an invitation to all forms of disaster. It should be particularly noted that although visas for Indonesia are fairly straightforward to obtain, an additional police permit will be required in order to visit West Papua.

A Poignant Farewell to West Papua

Atop a hill near Jayapura, a plaque can be found commemorating the fact that it was at that spot that a huge HQ was constructed for US and allied forces, in preparation for the liberation of the Phillippines, in 1944, under the command of General Douglas MacArthur. The area is presently controlled by the Indonesian Army and access is extremely restricted but it is possible to gain entry, provided you are prepared to surrender your passport at the entrance.