We Continue Driving South Along East Side of Salton Sea

Leaving Bombay Beach we continued to head south on highway 111. While we were still going parallel to the Salton Sea the distance between the highway and the sea had increased leaving the sea beyond view.

Even though I was in the front seat I wasn’t paying much attention to our route since my son-in-law was doing the driving I and so long as he was getting us where we wanted to go I wasn’t about to interfere. In addition to trusting Doug driving my car, I knew the trip would be good as his idea of travel is the same as that of my wife, daughter and I. Besides, it is nice to occasionally be chauffeured around as a passenger.

We stopped for a quick lunch in the desert town of Niland, California located a few miles east of the south end of the Salton Sea. Doug was following the instructions from the GPS on his phone leading us toward the geo-thermal mud volcanoes. However, we had a surprise before reaching the volcanoes.

Other than a few passing cars and the paved road we were traveling on we were pretty much alone in a vast desert. What happened next was a total surprise.

We were passing through a hilly area and, as we rounded a curve that had been cut through the hill, we passed a woman selling lemonade from a little roadside lemonade stand! Even though we were in an airconditioned car with a good supply of water on board, the image that came to mind was of old newspaper cartoons depicting a person in rags and dying of thirst crawling toward a person selling lemonade (or water) in the middle of the desert.

I also couldn’t help thinking that those poor woman had chosen one of the most desolate spots in North America to sell lemonade.

Rounding the next curve we saw a huge multi-colored hill with a large heart on the front, a cross on top of it and a crowd of people and parked cars in the field surrounding it.

There were a number of cars parked on both sides of the road leading me to reconsider my thought that the woman with the lemonade stand had chosen a poor location.

We, of course, stopped and spent 45 minutes or more walking around, climbing the hill, exploring the inside of the hill and taking numerous pictures.

The hill itself is a man-made structure and not a natural hill. It is 50 feet high, 150 feet wide and built by the hand of one very dedicated man named Leonard Knight.

The mountain was built by one man out of large dead tree branches, hay bales and plywood covered with adobe clay dug from the area and mixed with water, which had to be brought in (probably from Slab City which is located next to the site) as there is no running water at the site and then hardened by the hot desert sun. Over 100,000 gallons of paint were used to paint the mountain and the inscriptions (the Lord’s Prayer, Sinners Prayer and some quotes from the Bible) on it.

Knight spent 25 years living at the site and almost single handedly building the mountain. Declining health forced the then 79 year old Knight to move to a care home in San Diego. Between then and his death in 2014 he was able to make occasional visits to his mountain as well work with a group organized to oversee and maintain it.

Standing On Top of Salvation Mountain

Who Was Leonard Knight?

Leonard Knight was the fourth of six children was born to a family in Vermont on November 1, 1931. His family had a small 32 acre farm outside of Shelburne Falls near Burlington, Vermont where they grew vegetables along with some farm animals. His father was a foreman in a nearby factory which left the burden of working the farm to his children.

Leonard comes across as shy and somewhat of a loaner. He didn’t like school and apparently didn’t do very well (partly because he skipped attending whenever he could). Finally, when he was fifteen or sixteen he dropped out of school while in the tenth grade. Once out of school, his father got him a job in the factory where his father was a foreman.

Shortly after turning 20 he was drafted into the U.S. Army in 1951 where he was trained as a tank mechanic He served during the Korean War (June 1950 to Jul 1953) but most of his service was within the U.S. as he did not arrive in Korea until 10 days before the July 1953 Armistice ended the fighting (most of the U.S. forces involved in combat operations in the Korean the war were reserve and National Guard units recalled to active duty for the war rather than using units of the regular Armed Forces - as the fighting came to an end pressure to bring these troops, most of whom had fought in World War II, home and replace them with regular military units for garrison duty).

After his discharge from the Army Knight returned to Vermont and went to work as a mechanic in the body shop of a car dealership. He quit his job at the car dealership in mid-1956 and joined his brother Roy on a road trip across the U.S. which took them to San Diego where both appear to have settled down for some time.

It wasn’t until his father died that Leonard returned to Vermont where he first worked painting cars and then, after teaching himself to play the guitar, set himself up as a guitar teacher.

Leonard Knight doesn’t seem to have married or had a family and was not a religious person. He comes across as shy loaner. His last job in the Army was as a sergeant in charge of supervising the motor pool. While he did the job he later said that he was uncomfortable supervising and telling people what to do.

In 1967 he returned to San Diego where he visited his sister Irene who resided in suburban Lemon Grove. He was staying with Irene, who was a very religious person who kept trying to get him to join her in her faith. The accounts I found about him all agree that he was irritated by his sister’s constant lectures and pressures to get him to accept faith.

Leonard Knight was not an atheist, a person who doesn’t believe in God, but more of an agnostic, a person who neither believes nor disbelieves in God.

Accounts about Leonard Knight’s change of heart vary slightly but all agree that one day, Irene’s constant pressuring him to accept faith and go to church caused him to angrily leave the house and go off alone in his pickup truck. After driving aways he pulled over and just sat in his parked truck when suddenly he felt a surge of faith in Jesus.

Looking Down at Desert From the Top of Salvation Mountain

His conversion was a strong belief in Jesus and salvation but not an urge to go to church or concern himself with any type of religion or religious doctrine. However, his belief in Jesus was intense.

He returned to Vermont and came up with the idea of building a giant hot air balloon with words calling people to believe in Jesus painted on the balloon. He spent from 1970 to 1980 trying to accomplish this before accepting the fact that the balloon he was trying to build was too big to be lifted by hot air.

Something made him feel that this vast desert was the place to build a monument to tell people about Jesus. Deciding to stay a week he set about attempting to build an eight foot sphere out of cement beside the highway with his message about Jesus on it. Knight mixed too much water in the cement which caused the sphere to collapse.

Cross at the Top of Salvation Mountain

Instead of giving up after this failure, Leonard Knight ended up staying and undertaking what became a major building project.

For the next 25 years, until old age related ailments forced him to move to a care home in San Diego, Leonard Knight worked tirelessly on his new project which he called Salvation Mountain.

One of the Vehicles on Salvation Mountain Site

Some Final Thoughts on Leonard Knight

While a shy man who appears to have led a somewhat solitary life, Leonard Knight was not a hermit or even a classic loaner. He admitted that he was uncomfortable supervising and telling people what to do when he was in charge of the motor pool in the Army. Prior to his conversion he seems to have drifted through life without building lasting connections outside of his family.

Following his conversion his passion in life became sharing the faith he had found in Jesus. Unlike his sister who repeatedly talked to Leonard, and probably others, about her faith in an attempt to get them to accept it, Leonard simply shared his faith, first with the failed balloon and then with Salvation Mountain.

While Leonard willingly and gratefully accepted donations of money, materials and even offers to pitch in and help with some of the building, he never seemed to actively solicited help from others.

Following his conversion, Leonard Knight’s passion was the faith he had found. His new found faith gave purpose and joy to his life and he wanted to share this with others.

Most shy people mingle with others but tend not to speak up often or take the lead in conversations unless someone gets them to talk about something that is very dear to them. At these times a shy person will open up and talk about their passion. However, while the shy person will passionately share what is near and dear to them they share it with no expectation that the listeners will share the shy person’s passion.

This seems to be the type of person Leonard Knight was.

View From Inside Salvation Mountain

According to a marker on the site Leonard Knight died on February 10, 2014. According to the same marker an organization called Salvation Mountain Inc. is responsible for maintaining it. A second, smaller marker states that Folk Art Society of America has designated Salvation Mountain as a National Fold Art Site Worthy of Protection and Preservation. 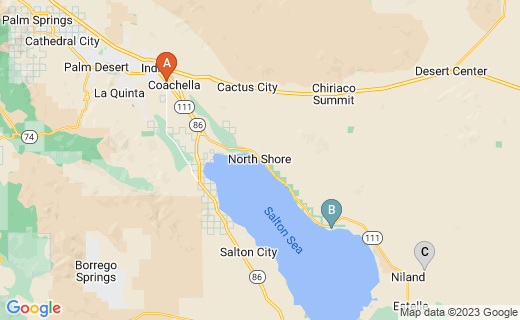