Did You Know These Things About the History of Dunedin, Florida?

The history of Dunedin, Florida starts long before it's current popularity. Yet just like today, the Dunedin of old had a thriving downtown and was a popular place for northerners who wintered here to escape the harsh winter up north.

The dock stretched far out into the harbor. Clippers, schooners, and sloops tied to the dock unloaded their goods - scallops and shrimp from Cedar Key, cigars from the Keys, coffee from New Orleans. Two and three-story homes lined Victoria Drive, their waterfront vistas a canvas of sea and sails and sky. In the distance, Hog Island spread across the horizon. The Orange Belt Railway trains chugged into town carrying passengers, citrus fruit, and household staples. This was Dunedin in the early 20th century, just years after it was incorporated in 1899.

With a population of only 350 in 1913, Dunedin was small by today's standards but was a bustling seaport and trading center of the day. It was the first town incorporated on Florida's Gulf coast between Key West and Cedar Key. With its large dock, Dunedin boasted Florida's largest fleet of sailing vessels. In 1870, George L. Jones tried to "name" the town Jonesboro, but two Scottish merchants, Douglas and Somerville, filed a petition in 1882 to name the post office, and town, Dunedin. The name comes from Dùn Èideann, the Scottish Gaelic name for Edinburgh.

In the early years - the 1860s - settlers from Georgia to Scotland settled in the town. Most worked as cotton and citrus growers. In 1868, Reverend Joseph Brown arrived by boat and quickly built a following. Legend says he preached right by the dock the first Friday after he arrived. His congregation built the Andrews Memorial Chapel in 1888 on donated land adjacent to Dunedin Cemetary. The building was moved in 1971 but remains open to the public as a museum and for use in weddings. In the 1880's, J.O. Douglas, who helped incorporate Dunedin, built his home on Scotland Street. It still stands today and is a private residence.

The History of Dunedin, Florida in the 20th Century

By the 1920's, the nearby towns of Clearwater and St. Petersburg were growing, as was a resort town ten miles north, Tarpon Springs. The Hurricane of 1921 devastated much of the the Tampa area coastline and decimated the citrus industry. It also changed forever the shoreline of Hog Island. The original inlet for sailing vessels to dock in Dunedin cut between Hog Island and what is now Clearwater Beach. However, the hurricane partially closed that inlet and created a new one through Hog Island. Today we know Hog Island as Caladesi Island (on the south) and Honeymoon Island (on the north). The inlet is called Hurricane Pass, and if you don't mind walking a couple of miles you can trek from Clearwater Beach to Caladesi right across the location of the former inlet. 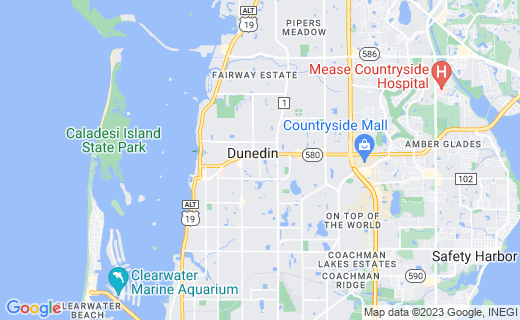 Dunedin as a Town of "Firsts"

The town of Dunedin officially became the City of Dunedin in 1925. In 1927, the 100-room Fenway Hotel opened. It offered guests luxury accommodations as well as sweeping views of the harbor, a dock, and a natural spring beside the dock. The hotel hosted diplomats, artists, and other celebrities like Carl Sandburg and Babe Ruth. It was also the site of the first radio transmission in Pinellas County.

What other firsts can Dunedin claim? Frozen orange juice originated here in the 1940's, as did the pram sailboat which is still used today in the Dunedin Youth Sailing program. The amphibious Alligator was invented and tested here before being sent to the Pacific to help the cause in World War II. Dunedin was the first home of the PGA. Eighteen senior tour championships were played at Dunedin Golf Club. The Club remains open to the public. And from 1972 to 2012, Nielsen's master computer responsible for TV ratings was located here. That's a lot of firsts for a little town often overlooked for its bigger neighbors Tampa, Clearwater, and St. Petersburg.

Today Dunedin's rich history can still be found in its historic homes on Scotland Street and Victoria Drive, in the 1920's era building still used by the Dunedin Boat Club for meetings and parties, and in the Scottish names of businesses, residents, and streets. During the school year, the Dunedin High School Pipers stroll through the downtown streets, the skirl of their bagpipes serenading onlookers and reminding us all of the town's colorful and distinguished past.

The History of Florida
Buy Now