Connecting With Western Lowland Gorillas in the Congo Basin 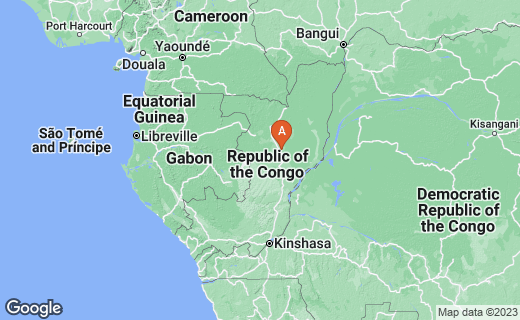 Into the vast green expanse

We (my husband Matt and I):

In 1991, Spanish Primatologist Dr Magdalena Bermejo established a centre in the Republic of Congo to study the western lowland gorilla (Gorilla gorilla gorilla). Despite the number of these primates being greater than those of their counterparts, eastern lowland and mountain gorillas, western lowland gorillas are rated as 'critically endangered' in the IUCN Red List due to disease, poaching and loss of habitat. As they live in dense rainforest and are hard to study, Dr Bermejo 'semi-habituated' (i.e. conditioned) certain groups of these primates. This means that, while retaining their wild status and fear of humans, they will allow people to approach within a certain distance, so they can be studied and yet are not vulnerable to human attack.

Now let's find out more about the gorillas 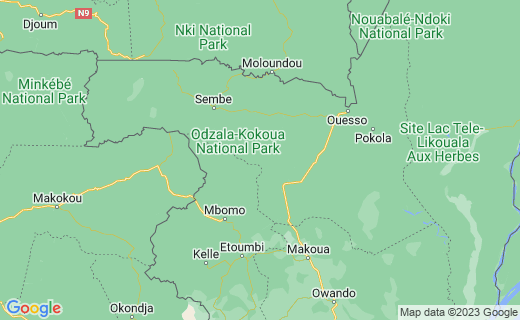 Odzala-Kokoua National Park is a pristine region, much of which has not been explored by humans. Under the protection of African Parks, it contains savanna, riverine forest and other ecosystems as well as the marantaceae rainforest the gorillas rely on for food and shelter. They eat the stems of the marantaceae plants and trample down clumps of it to sleep on at night.

Marantaceae is a broad-leafed high-growing shrub and the dominant groundcover in the benign rainforest which harbours few dangerous animals or insects. Leeches and ticks are practically non-existent. There are not many biting and stinging insects, though there are malarial mosquitos, and mainly non-venomous snakes.

To get to this fascinating place, we flew for four hours from Brazzaville, the nation's capital, in a small chartered plane. Our route was mainly over swathes of different hues of green and winding tea-coloured rivers, over some of the most untouched and beautiful natural expanses I have ever seen which are home to an amazing array of birds including African parrots and bee eaters; mammals such as monkeys, bongos, galagos and forest elephants; reptiles and amphibians. Many of these species will be the subject of another Congo Basin-related hub page, to come.

Who wouldn't want to help preserve this amazing ecosystem and encounter our primate relatives up close?

Come gorilla tracking with us

With our local gorilla tracker who was experienced in reading signs and monitoring gorilla movements and with our guide who gave us much useful information, we followed the Neptune group on Day 1 and Jupiter group on Day 2.

Interacting with the Neptune group

On Day 1, we had to hack through thick groves of marantaceae for several hours. The plants towered above us as we inched slowly forwards, trying not to trip over fallen stems. I felt like an explorer in a bygone age. Butterflies flitted.

After about 3 hours of slow manoeuvring, we came to a trampled down area where the pack had slept the night before: there were massive clumps of gorilla dung.

I picked up a half-eaten piece of orange fruit. 'Is that the gorillas?' I asked the guide. 'No, it's a piece of fruit,' he replied. Everyone's a comedian.

We heard sounds of something large pushing through the undergrowth and the crashing of branches. Trees swayed and then, above our heads, a gorilla was silhouetted against the lowering sky, watching us from a perch in the high canopy. We had found the Neptune group.

The silverback slowly descended down a tree trunk, hand over hand, watching us over his shoulder the entire time, then disappeared into the marantaceae thicket. Other gorillas peered down from above, some coming closer to get a better look at us. The dominant female, Nona, ran from branch to branch with her sweet baby clinging to her belly, putting as much distance as possible between us and her while Caliope, the inquisitve woman, gazed steadily at us from her position in the fork of a tree.

Young gorillas jumped and played, sometimes landing on branches that could not support their weight and cracked so they would swing to the ground. A watchful female ensured shenanigans were not too boisterous and dangerous.

The thrill of seeing these imposing yet gentle animals is impossible to describe. They looked at us with wise brown eyes and I felt unaccountably happy. It felt better than drinking a good bottle of wine with great friends.

For the entire hour (the maximum amount of time we were allowed to be there), I could not stop smiling. Seeing the shining eyes of my companions, I knew they too were grinning beneath the masks we all had to wear to ensure we did not infect the gorillas with any illnesses..

On Day 2, we found the Jupiter pack easily and quickly. They were mainly on the ground, and some were digging. Before Dr Bermejo's research, it was not known that western lowland gorillas would make holes in the ground to find roots to eat.

Other gorillas rested in the sunshine and slept.

Another hour of pure pleasure followed as we drank in the sublime and peaceful atmosphere of the rainforest and observed our fascinating relatives.

So many gorillas, yet so endangered. Why?

If you've just seen the video above, you'll have noticed the poor baby gorilla in the Jupiter pack with an injured face. Our guide told us he or she must have got caught in a thorny vine that ripped the skin. If the wound becomes infected and does not heal, the baby will probably die.

Infant mortality is high in these rainforest habitats, which are tough places to live despite their beauty. Only 65% of infants make it to adulthood.

These vulnerable primates are also critically endangered because:

Have an adventure and help the gorillas

Visiting the Republic of Congo is not cheap but there is probably nowhere else on Earth where you will have a pristine national park, and its plethora of amazing plants and menagerie of rarely-seen animals, practically to yourself.

Tracking and being with the gorillas is a thrill that's hard to beat, but there are other activities on offer too: walking through the savannah and riverine forest, wading through the bais, boating on the rivers or paddling in a crystal clear stream while sipping a glass of wine.

Accommodation-wise, you get to stay in one or more camps in or near Odzala-Kokoua Nataional Park on a package including food, drink, transport and activities.

Better still, proceeds from your visit go to helping save gorillas and other endangered animals of the Congo Basin.

By visiting the Republic of Congo, you are supporting the government's pledge to preserve valuable gorilla habitat. Find out more

You know heaps more now, right? Do the quiz to find out

Packing your bags for the Congo?

Are you intending to visit the Republic of Congo?

I hope you find this page informative, inspiring and interesting. If you think I should have included more information on a particular topic or you have helpful feedback, please share it in the comments section. And rate this page.

Check out my other hubs on African wildlife and travel, including: