Guangxi is a fascinating mixture of ethnic groups living in a lush, tropical region which boasts of many lovely flowers, rich cultural traditions, and unique folk music.

The flight from Beijing to Nanning is just a few hours. I was amused that they played "Muzak." One song was an American song from the 50’s but had a Chinese singer. They also had a game during the flight which was sort of a lottery. People bought tickets and the prize was a free flight. They serve “white coffee” which means coffee with cream.

We pass lots of very barren hills in the North but the mountains close to Nanning are lush and green. Some mountains are terraced and seem surrounded by water. There are terraces cut into the mountains for planting. I see sugarcane and pineapples. There are incredible white clouds as we make our descent.

Tropical Paradise
The weather is warm and humid and I feel right at home. As we drive from the airport to the hotel, our guide, Joy, tells us about Nanning. They have two crops a year and grow sugarcane, bananas, corn and other crops. I see workers in the field wearing cone-shaped straw hats. Joy says those are old style hats from Vietnam. Guangxi is right next to Vietnam and I am surprised to see people working in the fields with hoes and straw hats in the same way I imagine they have been doing for thousands of years.

As we pass by many old buildings in the process of being torn down, Joy tells us that they are rebuilding Nanning entirely. Whole blocks of the old buildings are being torn down and new skyscrapers are being built on top or behind them. I see these new structures everywhere we go, surrounded by green mesh. Joy explains that the plan is to entirely rebuild the entire city. I can't imagine something like that being done in America.

According to Joy, there are 1 million people and ½ million motorcycles in the city. I can believe it. It seems there are motorcycles everywhere. They even have a special street section for them on the highway along with another section for bicycles. There is beautiful landscaping by the airport and in the city. It looks like Disneyland with beautiful tropical flowers and plants. In fact, as a native of California and someone who also lived in Florida, I feel right at home. Yet, I'm surprised to also see hills with pine trees that have long needles.

Ethnic Groups
Joy tells us that Guangxi is 68% Han and the rest minority groups. If a minority group has less than 10 million people, then there is no limit on the number of children they can have. Larger groups can still have two children. She tells us that Zhuang people have large noses, flat faces, and a large forehead. I get the impression that she thinks they are unattractive. She looks at the pictures we have of our babies and says they all look Han.

International Folk Song Festival
Joy says the city has just finished celebrating the International Folk Song Festival. We see flowers everywhere and special decorations. When we later visit a park called Green Mountain, we see a stone stage used in the festival, which is decorated with ethnic minority designs. They especially seem to decorate with frogs. All over the city, I see amazing displays of flowers.

Most of the people I traveled with stayed in the hotel or took a cab to the nearby department store, but I loved walking around the city. I felt very safe even walking around in the back streets. I certainly felt noticeable! During the week I walked around the city, I only saw one other person outside of our group at the hotel who was not Asian. However, what I mostly felt strange about was not my height or the fact that I was a woman walking alone in a strange city. What really made me feel most out of place was my height. I'm 5'9" and although I'm used to being a bit taller than most women, I'm not used to being the very tallest person I see anywhere. I sometimes felt like a giant as I walked along and had one funny moment at a crowded shopping area when I came around a corner and startled a young man sitting on a chair. He just looked at me and burst out, "Da!" (big!).

As I walk along, I notice that there are parking lots for bikes and motorcycles. These usually have an attendant and I notice that this person seems to collect a fee. At one particularly large lot, I saw a woman with a cart run into a row of bikes, knocking 7-8 of them over. The bike attendant ran over yelling while she seemed to be apologizing. So I guessed the attendant is also there to protect the bicycles.

Banners Shop
The most interesting shop I’ve seen is a sign shop which makes red and white banners that are hung up everywhere. The banners are about 3 feet wide usually and seem to be made of a kind of red fabric. They have white Chinese characters on them either horizontally or vertically. All of the shops are open to the street, so I was able to watch their process as I walked to and from the department store. They type the characters into a computer which is attached to a very large printer. The printer apparently reverses the characters and then prints them out onto something like white contact paper. The workers in the shop then cut out the characters and then adhere them to red fabric banners. I suspect that the fabric is reusable and that the banners are rented rather than purchased. I’ve seen the banners in other colors, but mostly they are red and white.

Crossing Nanning Streets?
Crossing the street is dangerous. I am not sure if there are any rules, although there are stoplights which sort of stem the flow of traffic. As a pedestrian, you have three hazards to look out for—cars, bikes, and motorcycles. If the cars stop, which they don’t always do, the bikes and motorcycles may not. I finally just decided to follow anyone who stepped out in front of me! One of the most unusual and unexplainable sights I saw was three guys with skulls of cows on their backs walking down the street carrying guitars. Some sort of Texas band? 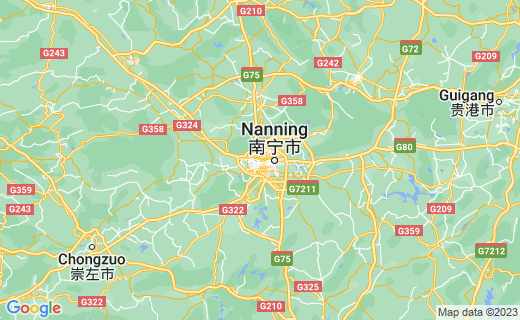 The streets nearest our hotel, the Majestic, have broader walkways and more plants. In fact, quite near the hotel was a street full of ritzy high-end shops, the kind I don't usually go into! However, when I went down some other side streets, there was another side of the city with small sidewalks and shops that looked like they were family businesses that would be willing to bargain, but I don't know enough Mandarin yet.

On one walk, I found a street where they sold cell phones. There were 5-6 stores with thousands of phones. On the main street I walked on, they focused on emergency equipment for police and fire departments. On my failed attempt to find a second department store, I wandered into a park which was off the main road and found it full of people playing card games or instruments. Others were just sitting and talking. I realized that if you lived in an apartment like the ones I had seen, you would try to spend as much time as possible outside. In one of these little side streets, I saw the only pet cat I saw while in China, sitting under the chair at a small family restaurant.

There is a special path for bicycles right next to the car roadway. Nanning had another special path for motorcycles too. Palm trees were everywhere and so were China-berry trees. They lined the streets. The sidewalks were always unusually clean. I saw women wearing straw hats sweeping them with large stick brooms. Most of the time, the sidewalks were not concrete; they were granite stones! They were beautiful.

Around public buildings there were large plazas, often decorated with beautiful landscaping. There were also exercise parks with brightly painted play equipment for children and exercise equipment for adults.

Apartments
Everywhere we went we saw multi-story apartments. I realized looking at them, that many of them have no windows except the balcony. Most balconies are open and have clothes hanging out. What amazed me is that the clothes hanging on the pole outside the balcony could easily slip off and fall to the ground below. Our guide John says that his apartment in Beijing is 900 square feet and that is a pretty good size. They have five people living there and the cost to buy it would be $100,000 U.S. dollars. Joy says that in Nanning apartments are $2,000 a square meter. According to John, an average salary is $150 a month and a couple can live on $300 a month.

The Majestic Hotel
Our fancy hotel is in stark contrast to many of the apartments we see in the city. Back in America, I don't usually go to 5 star hotels, but I sense that the guides think we do. Our hotel in Nanning, The Majestic, is billed as the finest hotel in the city and is quite beautiful, with a wide entrance expanse and lots of marble everywhere. We see several other people with adopted babies as we come in. One couple was from Hawaii and had just gotten their daughter last night. The little girl seemed quiet but walked along with her family as if she belonged with them. Although we are very anxious to meet our daughters, we shower and have dinner first so that we will be rested from our trip. I put on a skirt. This is one “birth” that I can get dressed up for!