Traveling I-40 From California to Alabama

State and National Parks and historical attractions have long been a favorite destination for Liz, and she loves sharing them.

Notes From the Road

Back in the year 2000, we took a cross-country drive to visit friends in Alabama. From where we live in California, that was a long trip. We were on the road 3 days getting there, pushing hard to have maximum visit time.

We traveled along Interstate Highway 40, which parallels the old, historic Route 66. Some of the old road can be seen off in the distance, used rarely, and just by local traffic; some of it has been incorporated into the newer highway. In some places, small towns still exist along the old road, and must be accessed via an exit ramp from the I-40 freeway.

On the way home, we took a detour through Las Vegas and an extra day, for we wanted to re-visit the Star Trek Experience show and museum that we’d seen there on our honeymoon. We enjoyed it just as much, and left just as mystified as to how a certain special effect was done. (Sadly, it has now been removed.)

That was before my husband had all his health issues, and he did about 90% of the driving, leaving me free to make notes on the passing scenes and jot down poetic thoughts, or strange wild thoughts. Some are dated, some are not. Mostly, it's the poems I dated.

I just recently came across some of these notes, though they are not complete; I don’t know what happened to the rest of them.

The snatches of memories found herein do appear out of sequence in some places: some were written on the outbound trip, and some on the return.

We traveled in mid August through early September. Probably one of the worst times to be in the middle of the desert, and there was a heat wave that year to boot.
Our truck, we belatedly discovered at this inopportune time, had not come with air conditioning. (Coming from San Francisco, we had not even given it a thought; for such is not needed in that town!)

En route, as we gained the desert side of the mountains, the following thoughts crossed my mind.

We’re hot, sweaty, sticky, cranky and miserable, wanting nothing so much as to plunge into the campground’s cool pool.

Unthinkable, then, the tenfold agony of the pioneers in their slow-moving wagons. No ice, no water to spare, and bundled in the head-to-toe clothing dictated by the propriety of the day.

I Lacked Even a Hand Fan!

It was all about 4-65 air conditioning: 4 windows rolled down, doing 65 miles an hour. It wasn't a great deal of help, given the outdoor temperatures.

Letting my mind free to wander can be a dangerous thing. Unfettered, it can come up with all manner of crazy, off-the-wall thoughts, such as this one:

Do you know why it took so long for the pioneers to cross the country? Well, folks, they had to keep stopping to wait for the guy with the tape measure to catch up, so they could record how many miles they’d traveled that day!

Mile After Unchanging Mile of Barren Dirt and Fences

Keeping the Road in Place?

All along Interstate Highway 40, there were fences along the sides of the road. These stretched from California through New Mexico and Texas. Never did we glimpse a single livestock animal.

What the heck? Was someone afraid the vast open spaces were going to run away? Ha! More likely, your tax dollars at work. “We need a way to spend some money! Call the Army Corps of Engineers. They’ll step in, and call for volunteers.”

“You, you, and you have just volunteered to build a fence to keep this road in its place!”

Live oak trees march bold and ramrod straight up to the crest,

While sagebrush cowers at the base, having fallen back in retreat halfway up.

Atop the peaks, in high modern contrast to nature’s scene,

Uncaring of darkness or light.

Needles, California. Midnight. Stopping for gas. It was pretty warm, still inside the truck, but stepping out at the gas station left us gasping. It was like stepping into a blast furnace or dry sauna. Needles is in the Mojave Desert.

A large round-faced thermometer on the wall of the building told the story: 100 degrees Fahrenheit. At midnight! We commented, and one of the attendants said, “You should have been here at noon; it’s cooled off twenty degrees since then!”

One hundred twenty degrees at high noon! I cannot imagine such temperatures!

It’s no wonder it is said that Needles is just a quarter of a mile from hell.

Probably the Hottest Region in the United States! 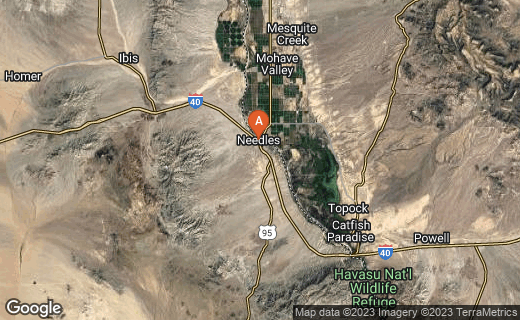 Situated in the Mojave desert, Needles, CA is probably the hottest region in the state

There is a blazing brightness to the desert daylight. Whether clear blue or scattered clouds: sunglasses are inadequate.

Nevermind the Sunglasses! Where is My Earth Box?!

We stopped to tour this amazing landmark near present-day Winslow, Arizona. From photos, you cannot really appreciate the size and depth of the thing. If a meteor of this size were to strike today, it would be catastrophic, even in a relatively unpopulated area. For the dust it would throw up would interfere with sunlight and crop growth.

The meteor struck 50,000 years ago, so there were no effects on humans. It is a fascinating tour, though, and as we approached along the road, the scenery inspired these thoughts:

Cast about as if by some mad giant,

Annoyed at his game of Tiddly-Winks. 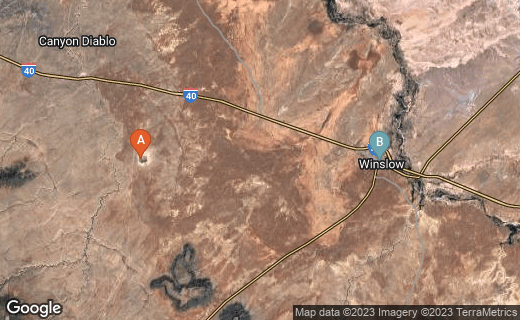 Have you ever traveled along Interstate Highway 40?

The Grand Canyon of Arizona

No cross-country trip is complete without a stop at the Grand Canyon. Carved over centuries by the Colorado River, it is an impressive sight to behold. This trip took us toward the south rim, which I had never seen. As a child, the family had visited the north rim, which, in my opinion, is even more spectacular and impressive.

However, the south rim is also a place of awe and wonder. The downside being that it is much more commercialized.

The road offers glimpses of the canyon, and the visitor center is a short walk down a trail from the main parking lot. The sculpting of the rocks, and the sheer size are as impressive, but the colors are much more muted than the view from the north rim. 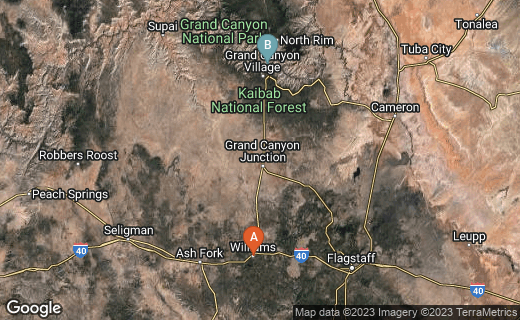 The south rim of Grand Canyon National Park is located just 60 miles north of the town of Williams, Arizona

Rain in the Trees

As we cleared the desert and got into eastern Oklahoma, we finally saw trees and forests again. What a relief that was, after mile upon unbroken mile of arrow-straight, hypnotic highway with no real landmarks to mark either the passage of distance or give any sensation of speed. At times it felt like we were sitting still on a dyno machine at 70 mph!

And then, it rained, and granted moisture and a brief respite from the heat, although, it was a warm and gentle rain, with a sideshow of lightning and thunder. I penned this verse.

Raindrops softly whisper down through the trees,

Dancing with each leaf;

Landing with soft kiss to the Earth.

As the dust is banished earthward.

Hurling darts of wrathful passion to and fro.

Drowning the voice of the whispering rain.

Rain Filtered Through Trees is a Soothing Sound

Stand tall against the sky.

Carved and sculpted by nature’s hand

Into shapes of fantasy, legend and myth,

Rising from the desert plateau

Atop a more softly rounded, sculpted base of gray.

Alone in the vastness

Shopping in the mix-n-match aisle.

Tucked into their wall;

A thousand hints of abodes of old.

A million ghosts prowl the clefts

Caves and Caverns Appear to Dot the Cliff Faces

Stand out below the mesa crest;

The Road Construction Shows the Past

In a grade cut in the road, the inner mountain is revealed. Layer upon stacked layer of carefully lain stones; it is reminiscent of an old New England dry stone wall.

That Was a Long Time Ago

I hope you've enjoyed this jaunt down memory lane with me. Finding those old notes brought back many pleasant memories of things we saw and did on that trip; one which was a once-in-a-lifetime event.

Everyone should travel across country by car, even if only once. It truly gives an appreciation for the size and scope of this nation. I've never driven farther east than Utah on Highway 80, but it goes through more settled areas and a number of large cities.

Traveling I-40 shows the still vast wildness and emptiness that once greeted our ancestors as they trekked westward. As you look off to the sides of the road, the only thing that really changes is the color of the dirt, from beige to brown to orange to red and blends of all.

It was a trip I do not regret making; it is a trip I would not make again.