Jeju (Seju or Cheju) Island is part the Jeju Special Autonomous Province of islands, which established political autonomy in 1946 after struggling with Japan in WWII. Most of the island is a UNESCO-recognized national park of South Korea.

Today, Jeju has grown into a honeymoon destination and one of the most popular resort areas in the Far East. In 1988, the martial arts of the Summer Olympics helped this growth and popularity to occur by bringing thousands of visitors into the area to watch Taekwondo become an Olympic sport.

The rise of Korean martial arts globally in the late 20th century brought increased attention to sites where the defensive arts combined to form Taekwondo. Korea, with the North and South having competing Temple-Gymnasiums for training and Olympic preparation garnered a lot of attention and interest.A new city and inter-city bus system established during August 2017 has made visiting around Jeju very easy.

The onslaught of Taekwondo Tourism rising since the 1988 Summer Olympics in Seoul and commemorated by Jeju's Sinsan Park, continues today. Students and vacationers can obtain a reasonably priced package tours related to Taekwondo training and Korean history.

Taekwondo Tourism now makes it easy to incorporate a trip to Jeju Island, just an hour away by plane from Seoul.

Jeju-do is the Korean term for Jeju Island, which is only one of 9 Provinces of Korea and happens also to be the largest of the 3,000 islands surrounding South Korea. The name of the island can also be written as Seju or Chejuand English language travel brochures, articles, and geography and history books use all of these spellings. The name, especially Jeju-do means "Place of the Gods", referring to the foundation myth of the local ethnic group that three male demi-gods named "Koh, Yang, and Boo" arose from the ground and created the Jeju population. At the same time, the Korean mainland tale began with the belief that three goddesses created the Korean people, althguh this was changed to male gods later..

Located an hour away from Seoul by airplane, Jeju-do is an exotic locale that can easily be combined with travel to the Capital. Becoming more well known in the 21stcentury, while remaining somewhat isolated from tourist mobs, Jeju-do has developed into a honeymooner's paradise. The island offers a very mild climate by the seas, enjoys four definitely different seasons, but with an average yearly temperature of 59 degrees F (15 degrees C).

Jejo-do covers an area roughly 45 miles by 26 miles and dates back eons to when lava erupted out of the sea and formed a land mass. Additional volcanic eruption formed Mt.Halla or Halla-san (pictured above), creating South Korea's highest peak. Korean martial arts form patterns (hyung or other terms in Korean or kata in Japanese) have been written and performed for decades in dedication to a largest mountain or an oldest tree.

At the top of Mt.Halla-san is a crater full of beautifully clear water, about half a mile wide. This is Paengnoktam and means the equivalent of "water where white deer play." It is said that Jeju-do Island women dive into this crater for sport from their teen years well into advanced age. In addition to Mt. Halla-san, Jeju-do features Samseonghyeol Hole, the legendary origin of the Jeju ethnic people. Sacrificial ceremonies are held three times a year at this siteto ask for the wellbeing of the Jeju.

Hallim Park offers palm trees and a natural history museum. The majestic Sunrise Peak is surround by 100 others at the farthest point east on the island, greeting each new day. Jeongbang Waterfall flows directly into the sea and the site of Jusangeolli is interesting with formations created by erosion via the ocean waves and wind. Dragon’s Head Coast features a rock formed into the head of a dragon in among its cliffs and caves.

You can also find the Teddy Bear Museum that features a gift shop and teddy bears displayed as famous works of art. Another interesting sight is the work of the women divers of Jeju all along the coasts.

All along the coast, from their youth through their latter 80s, Jeju Island's sea women ("haenyeo") work the sea floor as their maternal ancestors did, gathering abalone, seaweed, octopus, sea urchins, and turban shells for their livelihood. They dive 65 feet below the surface, holding their breath for over two minutes as they work.

U-do is famous for growing very flavorful peanuts from which ice cream is made at Jimmy's Ice Cream. Natural tangerine is another popular flavor. 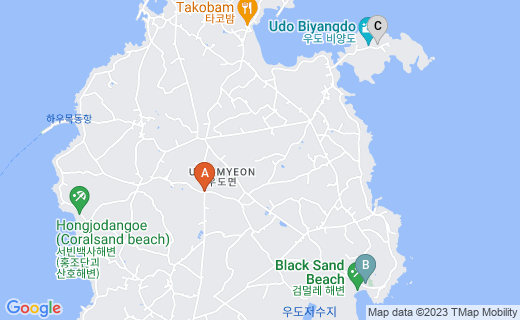 Biyangodo Island to the northeast of U-do is a short ferry ride or trip on a narrow road away to a few high quality seafood restaurants that offer marinated crabs, turban shell dishes, and the traditional Bibimbab.

U-do roughly means "The Place of the Cow", a cow shaped (or head of a cow) small island that is an hour's bus ride from Jeju City to Seongsan and another 15 minutes by ferry.

Eight is a mystic symbol in Korea that often symbolizes a circle or wholeness and eight scenes around U-do are recommended to every tourist. These include: A famous artifact in the park was created when the roots of two separate nettle trees grew together. It was salvaged by Mr. Kim Choon Hong after he found it during road construction in 1992.

Today, the natural sculpture is the symbol for the Korean tradition of honoring one's roots and growing strong roots in life. It is a symbol of a marriage that lasts for 100 happy years. Couples flock to this artifact on honeymoons in order to have their pictures taken with it.

Hyeopjae Cave (a South Korea National Monument) and Ssangyong Caves are also in Hallim Park, along with Love Land. The latter is a theme park of intimacy for newlyweds that has become popular since the 1970s. An Anime-themed play area is available for anyone under 18 years of age.

Tap-dong Street in Jeju City runs near the boardwalk away from the Port of Jeju and features large hotels and many restaurants that serve fresh fish. Many establishments are open until 4:00 AM.

Folk arts and crafts are also sold in shops as well as by nighttime street vendors along Tap-Dong, but also in the Jeju Folk Arts Center in Jeju City.. Jeju-do and its residents struggled against many Japanese bids for takeover in the 20th Century. This is especially true for the years from 1900 - 1950, and most particularly in the years previous to and during World War II, when Japanese Forces occupied much of Korea..

This museum commemorates those events and heroes.

The Jeju Independence Museum includes two full floors of exhibits, a theater, several outdoor monuments, ponds, and ongoing construction of additional buildings. Signs and plaques are in Korean, and English is not likely available.

Interestingly, Korean Martial Arts form patterns have been written to commemorate several such events related to WWII and Japanese occupation.

Many other attractions are waiting in Jeju-do, including botanical gardens, memorials, museums, and unique geography. A unique sculpture garden was designed specifically for newlyweds.