Trichy, A Vibrant City of Tamil Nadu in South India

Travel, especially the pilgrimage are the great pleasure for Sunil Kunnoth. He loves to wander with his spiritual sojourns.

An industrial as well educational hub, temple city, Trichy like its diverse features is known by many names. Tiruchi, Thiruchirappalli, Thrissinappalli, Trichinopoly are its other names. But nowadays commonly called Trichy. It is the fourth largest city in Tamil Nadu and situated on the banks of the famous Cauvery (Kaveri) river. It has no sea and Cauvery is the main water source. Trichy is just 5 hours drive from Coimbatore. You can also reach here by Train from major towns of India.

The city has got a clear mention in the history text. Cholas and Pallavas had ruled the land for centuries. The greater part of the city was believed to be built by the Nayaks of Madurai. They also got the credit for building the fort in the city, which even exists today. Built around the Rock Fort, it has many structures dating back to 1760. The Rock Fort is still the main attraction of Trichy.

The city's name is also associated with Hindu mythology. The legend has it that 'Trishira', the step-brother of Ravana did penance here to please Lord Shiva and thus this place came to be called as 'Thrisirapally'. There is one more story in which Shiva, Parvati and Vinayaka appear. The trio took abode on the tree rocks on the nearby hill and as such the name 'Thrishkaragam' was given.

The city and the surrounding area are rich with the heritage of antiquity, historical monuments and archaeological interests. Above all, the place is a good religious hub of Hindus. Though Trichy is a Hindu dominated place, Muslims and Christians too have a prominent presence here. Besides Temples, it has some marvelous Mosques and Churches. The land is also known for communal harmony. People here lead a peaceful life.

The most popular and spectacular attraction of the city is Rock Fort. Actually this is the landmark of the city. It is an 83-meter high rock and 300 feet above the city. The ascent to the rock hill is by a covered stone staircase from the south through 437 steps made out of the rock. Climbing the steps in itself is interesting as well a tiring drill. You can relax sitting on the benches erected along the way and visiting small temples around the way. The summit has a temple dedicated to Lord Vinayaka commonly called 'Uchi Pillaiyar'.

Atop the rock gives a magnificent panoramic view of the township. The best time is evening and night. You will forget your tiredness the moment you reach the top. The cool breeze will relax you immensely. Please watch the photo of the city at night taken from here and placed above this text. You can create poetry with your camera from here. At the foot of the rock is the Teppakulam, a large masonry tank with a small and graceful Mandapam in the center.

Mukkombu or Upper Anaicut, the dam was constructed by Sir Arthur Cotton in 1836-38 across the head of river Coleron (Kollidam). For your information, India at that time was under the British ruling. It has an amusement park and other fine ingredients for a popular picnic spot.

An ancient irrigation dam built across the Cauvery river by Karikala Cholan in the second century. The notable feature of the dam is that it is considered one of the oldest water-diversion or water regulator structures built in the world and still in use. It was later strengthened by the British. You can observe the magnificent achievements of the ancient Chola engineers here.

A Roman Catholic Church over hundred years old. You can enjoy the beauty of the Gothic architecture.

It is located near the Theppakulam. The Church built in 1812 is a feast your eyes with its architectural excellence.

This place is a treasure house of sculptures from various places around Trichy. Don't miss to watch Bronze and Stone idols exhibited here. A pleasure spot for those who love history and sculpture.

Sri Ranganathan temple in Srirangam is an amazing ancient temple. It is also the biggest temple complex in India. Undoubtedly this is the most important and crowd puller pilgrimage center of the city. This ancient century temple has 21 towers. Out of the 21, the Raja gopuram, the largest one with a measurement of 72 meters high and 13 tier was built in 1987. It could be seen from far off places. The visitors are bewildered by its huge proportions. The remaining Gopuras were believed to be built between the 14th and 17th centuries.

The temple is a great Vaishnava pilgrim center. There is a huge idol of Lord Ranganatha reclining on the lap of Adishesha. The temple is very well preserved with its beautiful sculptures and painted walls. The greatest surprise of this temple is that you can see the preserved body of Ramanuja, a Hindu Theologian and Philosopher, considered as the most important Acharya (Guru) by the Vaishnavites. The body is in sitting position and still remain there without damage even though it is of a man lived some thousands of years back. What an amazing thing!

Noted for its architectural splendors, this ancient place of Lord Shiva is popularly known as Jambukeshwara. The temple was built during the Chola times. It has five enclosures with a lofty tower at the main entrance. Its ancient name is 'Thiru-Anaika' and means sacred elephant grave. The main 'Linga' in the shrine is always covered by water, which continuously flows through a spring of water. Goddess Parvati is called here as Akhilandeshwari and the place is known as 'Upadesha Kshetram' as Goddess Parvati acquired the knowledge from Shiva. The specialty of this temple is that the mid-day worship, 'uchai kala pooja' is done by the priest clad with a saree in female dress.

This is an ancient temple for the village goddess Mariyamman. A major pilgrimage center of the state, Samayapuram attracts people across the country. Its archaeological design and charm may be a reason for the big presence of European tourists to the place. It is believed that the goddess has miraculous powers and would cure the disturbing diseases of the devotees. 'Prayers are heard and problems solved immediately', pilgrims justify their constant visit here.

What attracts the tourists here is the peaceful village life of this small place inside the city. It has an ancient Shiva temple dedicated to Erumbeshwarar dating earlier to 19th century. The shrine is on a small hillocks easily approachable by road. 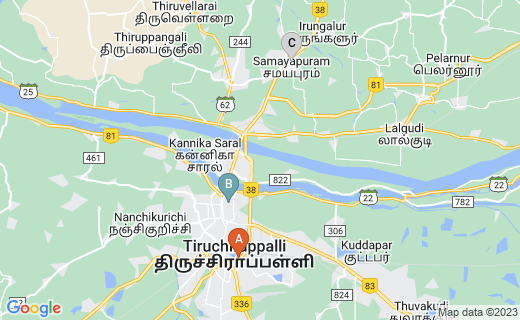