7 Reasons to Travel to Santorini, Greece

Lana is an aspiring travel writer with a serious case of shutterbug and an insatiable curiosity about the world.

In many ways Santorini is the epitome of a Greek island vacation. It has ancient cultures and modern amenities, blue-domed churches and nude beaches, picture-perfect sunsets and life-threatening donkey rides, authentic fisherman's tavernas and cheap gyro-inspired fast food joints.

Known as the 'Black Pearl of the Aegean', Santorini is pure ecstasy that everyone should experience at least once in their lifetime. Here are 7 reasons why.

Oia, the hilltop village in Santorini, can easily be one of the most painfully beautiful places in the world, not to mention an incredible wedding destination.

It's one of those places you feel almost obligated to visit, because everyone says you simply must see a sunset in Oia.

Oia sunsets are recognizable even if you've never been to Santorini: that cascading cliff over the caldera seeded with white houses, cobalt-blue church domes, and the sun setting over the Mediterranean.

It may be one of the most romantic places in the world, but you know what's not romantic? Crowds. A herd of sightseeing zombies flocking to the top of the hill every day around sunset to take their "money shot". And the fact that a lot of space in Oia is taken up by private properties and souvenir shops. And everything is thrice as expensive as anywhere else in Greece.

Once at the top, everyone starts looking for the best position sunset-wise. It can be anywhere, provided you have a folding chair and a nice cold beer in your hand. Our group dared to dream: we spotted a nice rooftop restaurant and took a seat. The waitress immediately came up to ask if we're going to have a "full dinner".

- Four courses each person, she said without blinking.

Apparently, you had to have a full dinner to get a table. A quick scan of the menu revealed that we could barely afford one course meal at this joint. Since nobody wanted to sell their kidneys to pay for that feast, we set our sights on a bar below, where we could finally relax, enjoy the view, and marvel at how excited people can be about seeing a sunset when they travel.

Since Santorini is essentially what is left of a massive volcano that erupted around 1600 BC, black and red lava rock is a signature Santorini keepsake. You can find almost anything made out of this strange porous matter, especially jewellery. We brought home a red lava sculpture of two faces kissing and forming a heart in the middle. Very romantic! Lava from the heart of the earth shaping a human heart.

A donkey can easily be a Santorinian mascot. Goofy donkey images are on everything, from refrigerator magnets to bags and wall clocks, and you get this impression that there is something authentic and fun about taking a donkey ride, especially if you need to get to the top of the mountain to see the sunset everyone's been raving about.

So when you see an old angry Greek guy yelling:

you may think to yourself: "That's a exactly what I need. I do not want to walk all the way up there." That's what I thought, looking at a mountain of steps in front of me. Plus, I enjoyed a donkey ride I had in Lesbos, so I raised my hand, and the donkey man pointed to where I should stand to wait for my turn. An English couple in front of me were joking around, giddy with anticipation.

This experience was both comical and terrifying. The path up the hill in Oia is very narrow: on one side you have a steep cliff, on the other side - sharp stones that form the walls around the path. What most people don't realize is that donkeys are very competitive animals - at least as far as the males go. They don't like to be behind, so they try to get to the very front by pushing each other, which would have been fine if it wasn't for that whole cliff/sharp stones issue. So if you happen to be riding on the left side of the road, it feels like you're being pushed off the cliff, and if you're on the right, your right leg is pressed against the rocks.

The woman next to me was clearly having a panic attack. She was screaming: "I had enough, let me off!" but no one can stop the donkeys in the middle of the trek, not even the donkey handlers. I looked over at the English couple. They looked particularly pale.

So if you like life-threatening experiences, the Oia donkey ride is for you! But if you're not an adrenaline junkie, a word of advice: stay clear of the donkeys.

Perissa is probably the most beautiful black-sand beach town in Santorini. It's a long beach but it feels cozy because it has a massive rock called Mesa Vouno on one side, which separates it from a neighboring beach town, Kamari, and Ancient Thira - a site of the 11th century settlement. A word of advice: black sand gets very hot very quickly, so you'll be wise to wear flip flops all the way to the water.

Red Beach is another Santorini favorite - red volcanic rocks frame this small beach beautifully, it's quite impressive. A good day trip would include a visit to Akrotiri - a buried ancient city destroyed by a volcano, then taking a boat ride from Akrotiri port to Red Beach, and finishing the day at White Beach, famous for its huge white rocks that create a truly unique setting.

Santorini is a wine mecca, and has been since antiquity. A traditional Santorini wine is called Vinsanto - a dry dessert wine from the local sun-dried grapes Assyrtiko and Aidani.

The best way to enjoy Santorini wine heritage is to visit a winery. SantoWines in Pyrgos is a popular wine-tasting place with tours that show all stages of vinification. You can get a simple tour, or a full package that gets you a tour of the winery followed by cheese platter (Greek cheese, olives, tomato paste dip) with barley rusks & 12 wines for tasting. Unforgettable experience!

And whenever you are in Greece, try retsina. Retsina is a type of dry white wine (or rose, and even red) flavored with pine resin. It's a truly authentic Greek beverage, like ouzo or Mythos beer.

Greek food is spectacular. Just thinking about it makes me salivate. Popular Greek dishes in Santorini include:

If you like active travel and underwater landscapes, you'll probably like scuba diving. In order to enjoy this adventure you need to be PADI- or NAUI-certified, but even non-certified divers can have a guided introductory dive, which includes feeding the fish.

That's what I've booked at the Santorini Dive Center - 3 introductory lessons for my brother, his wife and myself (55 Euros each), and 1 certification course for my husband (380 Euros), who've been dying to do it. I chose this dive shop because their office in Perissa was a one minute walk from our hotel (Stelios Place), and they had the highest TripAdviser rating.

What I've learned from my first (and possibly last) scuba diving experience is that scuba diving is not for everyone - it's a mind over matter type of thing.

And also, it's important to have a good instructor - someone who can relate to a first-time diver and who can be patient. Our "introductory" instructor (and also the owner of the business) wasn't, and we were quickly sent back to the shore, but my husband had a blast with his diving team. They even made videos and posted them on YouTube.

Diving at the Old Volcano Cave

Some authors believe that an ancient Minoan settlement of Akrotiri on Santorini may be the last remnant of Atlantis - a mythical land that was swallowed by the sea after a volcanic eruption.

Atlantis is first mentioned in Plato's dialogues, and that is the only historical account of the island. Other sources include theosophy founder Helena Blavatsky who learned about Atlantis from Tibetan gurus, and an American "sleeping prophet" Edgar Cayce who said that when highly evolved Atlantians became aware of the coming end, they hid the records of their civilization to be discovered by future generations.

Santorini evokes a sense of tranquility, perhaps, of a mythical kind, and that tranquility soothes, and at the same time, heightens the experience. It's one of those places you immediately want to move to, even though deep down you know that in a month or two here you'll go mad with boredom.

Unless you're flying directly to Santorini (which could be costly), you will probably be landing in Athens. One of the most popular and economical ways to get to the islands from Athens (or any other major port) is by a ferry.

The cheapest ticket costs about 37.5 Euros one way, and during the high season (May to September) they have to be booked a little in advance. If you purchase the tickets online, you typically have to pick them up from a travel agency office. You can also walk into any travel agency and purchase the tickets in person, or just buy them at the airport.

Blue Star Ferries is a popular ferry route that leaves Athens every morning at 7:25 am. You can walk around the deck, snack and relax at the cafes and other sitting areas, and enjoy the breathtaking Mediterranean views. The trip duration is about 7-8 hours. Reserve airplane-style seats for an extra 4 Euros if you plan on sleeping, that way you have a guaranteed resting area. Or if you like to travel more comfortably, reserve a VIP or a cabin (69 Euros). 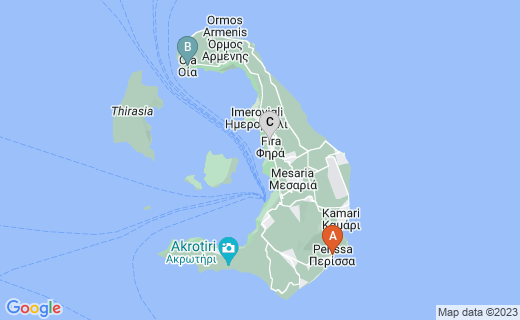 Would You Like to Visit Santorini After Reading This Article?