Rob is an avid traveller and self-confessed 'man of the world'. He is passionate about his home city, Manchester, & travelling the world.

Scorpion on a stick at Donghuamen Night Market

It’s one of the most recognised stereotypes in the world: they eat everything in China. Although the menus of most Chinese restaurants in western countries are reasonably tame and predictable – read chow main; foo yung; satay; black bean sauce with meat; prawn crackers etc. – a visit to some restaurants in China and a walk around the local street food markets will make you understand that this common stereotype does indeed have some legs (and that includes frogs legs!).

A visit to the Donghuamen Night Market at Wangfujing Street in Central Beijing will give the visitor a first hand introduction to eating snake on a stick, eating scorpion on a stick, and even eating a tarantula on a stick.

Would you consider eating Scorpion or Tarantula?

It’s no surprise then that in the industrious, enterprising China of today there is a market, catered directly towards the tourist dollar, which serves up the most grotesque and scream-provoking creepy crawlies and animal body parts the likes of which most of us would never normally consider eating. Of course it's a tourist trap but at the Donghuamen Beijing Night Market it's all about eating bugs, eating insects and generally eating weird things - and getting that Instagram shot or posing for photo to post of Facebook.

When you visit the Donghuamen Night Market on you kind of feel like you have to at least try eating bugs. The produce on offer on are all referred to as Chinese delicacies. Curiosity has brought you this far so you know you have to follow it through to its logical conclusion: try something.

A popular snack in China is jizhuayazhua (chicken and duck feet). These are almost always served with a spicy flavour often with added pepper or a barbecue glaze. Chicken feet snacks are sold in supermarkets in bags in just the same way potato chips are sold and consumed in the west.

You’ll pause over whether to eat tarantula and give some serious thought to eating crickets and grasshoppers. You’ll decide against it but then feel like you've bowed to the pressure, even though the pressure is coming from no one but yourself. Eventually, you see a guy eating scorpion on a stick. You overhear people asking him what it tastes like. He says it tastes good and it’s really no big deal to eat scorpion. He's already eaten a tarantula! If it’s no big deal to him then it’s no big deal to you either. Let's eat scorpions!

I can’t really articulate the flavour. It just tasted fried. There’s a part of me that still thinks this is all an elaborate con and everything on offer is made of some synthetic substance and you're not really eating scorpion or eating a tarantula at all. I also tried eating a snake and this tasted strangely similar to eating a scorpion. But I think that’s just the oil that they fry them in.

There’s another market in Beijing, a bigger more authentic market that serves the actual needs of local people but that sells all the same weird and wonderful produce and much more. However, the Donghuamen night market at Wangfujing Street was enough for me. 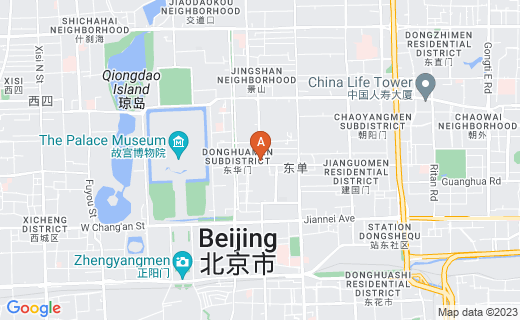 Where is Wangfujing Street and the Donghuamen Beijing Night Market

The Donghuamen Beijing Night Market is on Wangfujing Street at the Northern end of the street. It is only a few blocks away from Tiananmen Square and the Forbidden City and can be walked to or from either. There is a subway station nearby too. It's actually quite a welcoming environment and doesn't suffer from overcrowding like many Asian markets. This is partly due to the fact that Wangfujing Street is completely pedestrianised and so there is lot's of space in which to wonder around free from the fear of being run over.

Many backpackers and tourists stay in the Wangfujing area as there are many accommodation options as well as restaurants and transport links, including the Beijing Metro/Subway system. Wangfujing Street is one of the main high street shopping areas in downtown Beijing. Here you will find hundreds of Chinese stores as well as a large shopping centre that includes a number of global brands. There's even a McDonalds in case you just want something familiar and less adventurous for your dinner.

If the Donghuamen is not your thing but you're keen to try some 'safer' Chinese street food then head to the Wangfujing Street Food Market which is located towards the Southern end of Wangfujing Street. It's a super busy place but you can pick up a range of tasty snacks including jianbing, roujiamo, baozi, youtiao, shaokao, and many more. Most snack items are priced at around 10 Yuan.