Here in America, when we think of spaghetti, we think of a one-course meal. I know when I have always eating spaghetti, it has either chicken or beef in it. However, spaghetti is made differently all over the world. Each country makes its pasta dishes just a little different than the rest of the world.

While visiting in Tunisia, I wanted to try many different foods that I didn't have back in America. No matter what part of the world you travel to, each country has its unique foods that will always stay with you.

The third day I was there, I was asked, "Would you like to try the spaghetti?"

Now not knowing what I was going to be getting, I was up for some spaghetti. I thought, "How much different could it be?"

About half an hour later, my husband showed up with my spaghetti. Not knowing which kind of salad I wanted to go with my spaghetti, he brought me back two different types of salads. There was a Tunisian salad and a garden salad. Along with these two dishes was a plate of home-made french fries and a piece of rotisserie chicken with a green sauce and a red sauce.

Since there was no dressing on the salad, I thought the sauces were the dressing. Boy, was I wrong. The appetizers were a red and green creamed jalapeno (straight jalapeno) sauce, used for dipping your bread in, not a salad dressing.

Before I was told what the sauce was, I took some of the garden salad and dipped it in the red sauce.

Too late, I had a mouth full of heat. I didn't want to spit it out, how rude that would be. So I finished chewing it up. I can honestly say that was the end of the sauce for me.

Now back to the spaghetti. It was a big plate of noodles. The noodles were what Americans would call a regular size spaghetti noodle. The noodles were mixed in a tomato sauce with a few sliced green and black olives and some red looking things chopped up.

"What is this red thing?" I asked my husband

"That is red pepper," he replied.

"Hmm. This is red peppers?"

"Yes." He responded as if it was a normal thing to have in spaghetti.

Since I was starving, I stuck my fork in the spaghetti and twirled my fork around so that the noodles would wrap around the fork. Blew on it, to cool it off and into my mouth, it went. My mouth was on fire! I can not tell you how hot it was. I grab for my glass of juice, but it was no match for the spicy spaghetti.

I ate a few bites and decided I would attempt eating it again later after our walk on the beach.

A couple of hours later, we returned to the apartment. Since I was still starving from not have eaten much, I decided to give the spaghetti another go. It has sat there for a couple of hours and had plenty of time to cool off. I was hoping the spice had removed itself as well.

The second go-around wasn't half bad. Maybe because I was starving or the cold noodles help take away some of the spicinesses.

I took the lemon wedge they had sent with the chicken and squeezed it over the fries. I thought maybe if I ate the fries with the spaghetti, it would soak up some of the spice as well.

If you have never had lemon squeezed on your french fries, try it. It gives it a bit of a unique taste with a wang.

When I had finished eating the spaghetti, I couldn't even feel my tongue. My nose was running. And all I could think was if I had to eat this for the rest of my life, my weak stomach would be no more.

Unlike Tunisians, Americans are not raised on eating red peppers. Yes, we eat red peppers but only in certain dishes. I can honestly say that even Mexicans would find Tunisian foods spicier then they have ever eaten.

Out of the two weeks that I stayed in Tunisia, I can honestly say I had the spaghetti at least 9 of those days. That's how much I preferred the spaghetti over the rest of the Tunisian foods.

I can't wait to have some more Tunisian spaghetti with a side of lemon squeezed french fries. 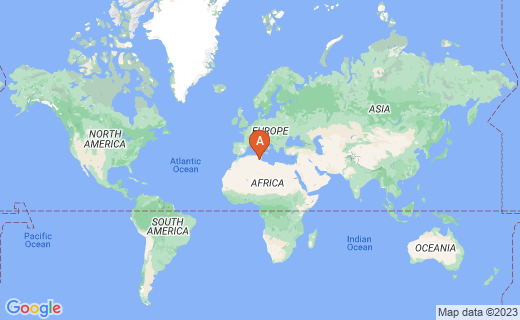 Tunisia is located in the North part of Africa by the Mediterranean Sea. The capital of Tunisia is Tunis.

Have you ever been to Tunisia?