Most parts of the UK retain some wonderful houses from this era, or slightly earlier - Lavenham in Suffolk is almost entirely composed of late medieval timber houses such as the Guildhall, and you can find other gems such as Montacute House in Somerset dotted around the countryside. York is another city with impressive numbers of half- timbered houses, concentrated on The Shambles.

London is one place where you won't find much in the way of half-timbered houses, due to the Great Fire of London 1666 - and the German town-planning of 1939-45.

Little Moreton Hall is not on the grand scale of some of these houses, but it really has a lot of charm. Even the staff who work there every day say it still has the wow factor - and it is pretty unique, a family home which was never sold from its origins around 1500 until 1937, when the National Trust acquired it lock, stock and moat.

Last weekend I went to see an architectural gem in the Midlands - a property administered by the National Trust. Little Moreton Hall is not one of the vast country houses, and many people haven't heard of it, but it's a very special and historically interesting place.

Originally there was just a great hall, constructed from oak timbers just after 1450, by the Moreton family, who were farmers and landowners. Over the next 100 years, a courtyard and other buildings were added, as well as a long gallery, an essential bit of kit to keep up with the renaissance-era Joneses. This building project was partly to show off the family's wealth, at a time when windows and glass were prohibitively expensive, the Moretons used them on an epic scale. Windows were so valuable that if the family went away, they would often take the window glass with them!

The wealth of the Moreton family came from many sources, including tax-collecting, but mainly from buying up cheap land after the fall in land values due to the Black Death in 1348.

Mostly the buildings are half-timbered and wattle-and- daub construction. There are no foundations, another reason for the amount of tilting and bending in the walls.

One of the pictures shows the window-maker's little advert - you can see that he ran out of room to fit all the lettering in!

There is not much of the original furniture in the Great Hall, partly because the family fell on hard times in a much later era, the English Civil War, and much of it was sold off to clear debts. There is a 15th century board and trestle - a massive slab of oak some 500 years old for dining and playing board games - where the expression is derived from. In the next room is a stone carved fireplace with the coat of arms of Queen Elizabeth I, (see picture) probably hidden by panelling during the Civil War, when Parliamentarian troops occupied the house for a while.

Another adjoining room used to be used a a storeroom, until by chance, Tudor wall paintings were discovered, covered up by wooden panelling.

Moats have been in the new here recently, as a Conservative MP famously made an expenses claim for cleaning his moat! We're only envious really. Little Moreton hall is surrounded by a moat, and you enter the house across a stone bridge. As the contents of the garderobes (toilets) fell into the moat from the bays above, you wouldn't want to swim in it in Tudor times.

Fairly late in the building project around 1600, the Long Gallery was added. This was an afterthought, and it's the long bit on the roof. In Tudor times this was a massive statement of wealth, and when all the windows were lit at night, must have been visible for miles across the flat, marshy landscape. As the peasants returned to their hovels, it must have attracted some envy!

The gallery was a place where ladies could promenade without getting covered in mud, and other stuff, and tennis may have been played there as there is an Italian renaissance tennis ball on display in the house - it was found behind panelling, a little time capsule of leather and moss.

One of the attractive things about Elizabethan buildings is the total lack of straight lines, and Little Moreton Hall is a good example - all the timbers are bent and crooked. This was because they used green wood oak in building as it was easier to cut, and as weight was added above it bent into those unique shapes, which remind you of the shipbuilding timbers used to make galleons. The weight of the Long Gallery (68 feet in length) must also contribute to the crushed look of the lower floors! 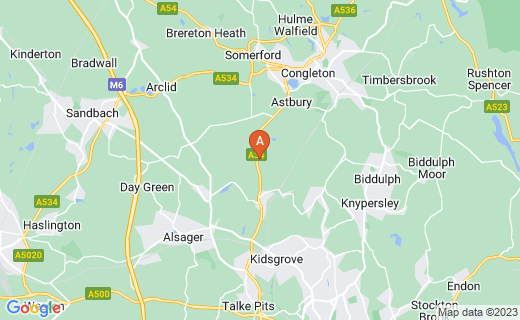 National Trust houses can be expensive to visit, so it's worth taking out a subscription if you are considering seeing a few of them - usually it's about £7.50 for an adult, for each site, which soon adds up. By contrast, annual membership is around £50. There is a restaurant and tea room (very small) and a shop on site.

If you have any questions about the hall, the e-mail address is littlemoretonhall@nationaltrust.org.uk

It's well worth taking the guided tour for this house - without a doubt, the best tour I've ever taken at a National Trust property, really interesting and informative throughout.

The M6 (exit 17) runs quite close to the site, although it's actually on the A34 just 4 miles south of Congleton, Cheshire. As with all NT houses, check the opening times - in this case, Mar to Dec, 11-5, but closed Mon and Tues. The car park is about 100 yards from the house, completely flat access from a drive - so disabled access is good.

Here is another great historic house, this time from Essex - built by a courtier of Henry VIII, and visited by him and also Queen Elizabeth I. From the top of the tower you get a commanding view of great open countryside, and possibly a nuclear power facility!