What is Uru or Dhow? I just gave a search on the Wikipedia and found the following text:

"The Uru, or "Fat Bot", is a generic name for large Dhow-type wooden ships made in Beypore, a village south of Calicut, Kerala on the southwestern coast of India. This type of boats have been used by the Arabs since ancient times as trading vessels, and even now, the urus are being manufactured and exported to Arab nations from Beypore. These boats used to be built of several types of wood, the main one being teak. The teak was taken from Nilambur forests in earlier times, but now imported Malaysian teak is used."

I didn't end my search there. The research required more information and observation. With this aim in mind, I made a couple of visits to the Beypore coast and entered the Uru building yard there. The on the spot study provided me scores of knowledge on the industry. The details I gathered got from the site as well through my observation are cheerfully shared here.

Cost and time for projects

The photos exhibited here is a current work going on at Beypore. This is a project booked for an Arab In Qatar. For your information, Urus are mostly purchased by rich Arabs and Royal families of the Middle East. The time taken for completion of a project is nearly 2 to 3 years. Barring some frames and important structures constructed of steel, the Urus are mostly made of wood. The wood is high-quality Teak imported from Malaysia. The cost would come around 4 to 5 Crores (roughly US$ 1,000,000 ). The price and duration of projects vary according to the dimension, facilities and demanded features. Currently, 3 projects are being done by Binafa Enterprises, They are the leading Manufacturers and Exporters of Urus in Beypore.

Mr. Sathian Edathodi and Edathum Padikkal Shivashakaran are the Architects of the ongoing projects. A video appended is below to guide you more on the work. The video is a wonderful display of the whole work, which I hope, would definitely clear all your doubts on the subject. So watch it. You can also visit the website of Binafa Enterprises at www.woodenvessel.com for more study.

Where Urus are made

In India, the work is mostly done in Beypore, Chaliyam in Kerala and some places in Gujarat. Urus are also constructed in some of the Middle East countries like Qatar, Dubai, Kuwait, and Bahrain. The advantage Beypore has over the other places is Its cheap labor and easy availability of skilled laborers. Needless to say, the cost of production is low in Beypore when compared to the rest.

Details of the Ongoing Project

Purchaser: A Royal family in Qatar

Capacity: It can carry up to 400 to 450 MT Goods and can accommodate hundreds of

Watch this VIDEO on Uru construction

The Arabs don't mind in spending millions of dollars for owning one Uru from Beypore. For them what matters is prestige, not money. The carpenters in and around the Beypore are the experts of the job. Both Muslims and Hindus jointly work on Urus. The name and fame of Mappila Khalasis were once chiefly attributed with Urus. Let's watch another video for a clear grasp on the Urus.

Another VIDEO on Uru construction is given below:

Beypore was once so famous for Urus and this coastal village was so busy with the Uru construction work. They had plenty of orders from the Arab countries. Naturally, the industry flourished well and the area had the presence of a large number of skilled architects and laborers. But that is history. The present story is different. The usage and demand for Urus are dwindling as technology is so progressed now and the resultant invention of motorized water vessels. Moreover, the income from this work was not matching to the labor it demanded This forced many workers to migrate to another field of lucrative jobs. The industry thus nearly came on the verge of a total collapse.

The sad state of Uru industry opened the eyes of Government and business men who loved this traditional industry. With a lot of relief schemes, aid and proper publicity around the world about this once prestigious industry have brought some positive changes. The propaganda clicked. Now orders from the Gulf countries are coming and the industry is on a survival stage. Urus have got a new life. It is reflected in Beypore well with the work of three works being executed currently. My colleague and close friend from Thrissur Mr. Benny has clicked this positive development on his camera professionally. He came all the way from Thrissur to study about Urus. When passionate guys team up, any mission becomes exciting as well executable. Benny, thanks, and claps for your work! 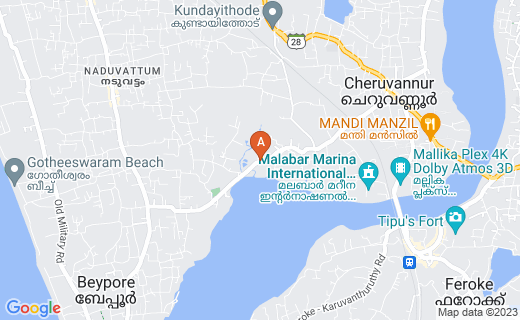 This is the Google Map of the Location

How to reach the Project Site

For watching Urus and its building work, you need not reach Beypore town. Instead, reach near "Shaji" Talkies on the Kozhikode-Beypore Road,2 km north of Beypore. A road turns to the left side just a few meters ahead of the talkies and it goes to Cheruvannur side. You can ask for direction from this spot. The project site is just behind Beypore Community Hall on the right side of the Beypore-Cheruvannur Road better known as B.C. Road. It only takes a 1-minute walk to the site from the Community Hall. (See the photo).

Well, now you are on the project site. Just listen the following. You can observe the building work of Urus and take snaps too. But to enter onto the Urus (yes, you need to climb!), please ask for permission. A Supervisor or Manager may be there around the site and please get permission from him. The laborers may be engrossed in their works. Don't disturb them. Remember permission also needed for taking photos. To avoid difficulties, it is good to take prior appointment ahead of your visit. You can contact Binafa Enterprises, Beypore. Their URL (site id) is given here for your perusal; http://woodenvessel.com/contactus.html.

The Task of Transportation

You may wonder how the Urus weighing several tons of weights enter into waters from the workshop. Yes, It is the real challenge. It is a great task requiring skill and huge labor force. Here too the modern technology has no role. The entire work of dragging the Urus to the waters are being manually done by the Mappila Khalasis, known for their strength and fine skill to do any Himalayan task. As I have appended a Video explaining their work style above, I don't elaborate much here. Please watch that.

From the waters, the Urus are being transported to its destination virtually dragging after attaching it onto a Tug. There is no other option either as fitting of engines and motorizing are done from the Middle East countries. Interior decorations, furnishing, electrification, fixing communication equipment, etc also done from there.

The terrific task ferrying an Uru to its destination is in getting clearance from the Government agencies. the delay in obtaining permission to move is what upsets the foreign buyers. The so-called red-tapism (read dragging!) prevalent in Government offices is the main stumbling block in an otherwise flourishing industry. If they not open their eyes and do something to address this problem, the industry will lose its charm and the purchasers may go to other locations, opined some businessmen I met there.

It may also please note that the people at Binafa (the Manufacturer & Exporter) are too engaged with their work. They are in the field for nearly 45 years and have got the good reputation for quality Urus. They are nice people to help you and to provide required inputs. But limit your queries to the possible minimum extent and only for serious business. You need not translate 'Business' literally as commercial here. It may be or may not be. For your research purpose also you can contact them.

What more you can expect from a place which the historians termed as "The Port of Truth", centuries back! There is also a mention in the history books that the people of Kozhikode are noted for their love, care and hospitality with a great amount of sincerity No doubt, you would endorse it after a visit to here, wouldn't you?