A Quick Guide to Utrecht, The Netherlands

Take a break from the multicultural melting pot called Amsterdam, and head to Utrecht to experience a real Dutch city. Here you'll find everything from medieval cobbled streets to a unique two-level canal system and remarkable examples of modern architecture.

Utrecht is the birthplace of some of the famous De Stijl art movement masters, including Piet Mondrian. In fact, the most famous building in the city, the Rietveld Schröder House, is considered the only true example of De Stijl architecture and is on the UNESCO list of world heritage sites.

In Utrecht you can climb the highest belfry in the Netherlands. The Dom Church Tower offers a spectacular view of the city at both 75 and 95 meters above ground. Along the way, appreciate the magnificent 17th-century Hemony carillon and church bells.

Since there's no lift, the 465-step climb up is a good way to burn the calories gained from all those nice caramel stroopwafels.

When it comes to Dutch cities, canals are nothing exceptional. However, the Oudegracht, which runs through Utrecht, is worth noticing. The 'old canal" is lined with unique wharf-cellar structures, built in the 13th century, that create a two-level street along the canals.

Today, the banks of the canal have a feast of restaurants and cafe's with water-side terraces. Enjoy a beer and a mouthwatering burger at the waterside terrace of Beers and Barrels. Situated in a wharf cellar, the bar offers more than 50 beer brands to choose from.

It's possible to book a boat-tour on the canals, a great pastime on a warm summer day. The tours start at the Oudegracht (see the map under this article).

In Utrecht you can also visit Miffy, the famous character from Dutch picture books drawn and written by Dutch artist Dick Bruna. The Miffy Museum (or Nijntje Museum in Dutch) is an enchanting miniature world of the iconic rabbit, and here young visitors are encouraged to explore, dance, play, and learn.

Each room of the museum is dedicated to a different, familiar everyday experience, such as going to the doctor or going to the zoo.

Dit unique house on the east side of city center is listed as a UNESCO World Heritage Site. Gerrit Rietveld built it in 1924 for Truus Schröder-Schräder and it's a good example of "function above form".

It are especially the primary colors and the transitions between interior and exterior which are eye-catching. Close by, on the Erasmuslaan, you'll find some more houses designed by Rietveld. Tours only by appointment.

The shopping in Utrecht starts in the Central Train Station, which is connected to Hoog Catharijne, the largest indoor shopping mall in the Netherlands. In addition, the city center has many department stores, small boutiques, and trendy concept stores.

The familiar fashion chain stores can be found on Steenweg, but for local designer items, check out the boutiques on Voorstraat and Schoutenstraat. The best thing is that stores in Utrecht are open seven days a week.

The Sonnenborgh actually exists of 2 museums. Upstairs you'll find an exposition on the history of astronomy on place which one was one of the most important astronomical research centers in the world.

On the ground-floor you'll find the foundations of the bastion on which the observatory was built. On specific days it's possible to have a glimpse at the sun through one of the telescopes, or, in the evening hours, to have a look at the moon and stars.

In the library there's a mini-planetarium on display 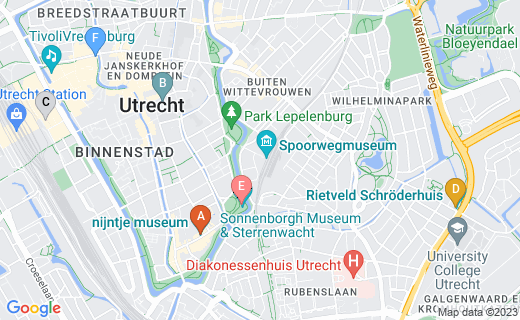