Where is Agonda Beach in Goa 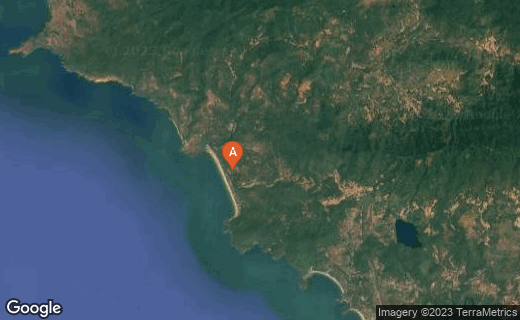 Agonda Beach is located in Southern Goa, approximately 60km south of Dabolim Airport and 40km south of the capital city of Margao.

Getting to Agonda Beach

Getting to Agonda Beach from Dabolim Airport is straightforward enough but it can take rather a long time. The distance is around 60km but your driver is likely to only average a speed of around 30-40kph due to a range of factors including the volume of traffic, the quality of roads, and, the cows!

If you've never been to India before then one of the first things you may notice is that cows are free to roam around everywhere. You will find them walking down the sidewalks, in the middle of the roads, and even on the beaches. They are practically treated like gods and are basically untouchable. Joking aside, I personally find it refreshing to experience this side of Goa/India. There is a harmonious relationship between humans and animals in Goa that is somewhat unique in the world - certainly compared to the west. Animals are not 'controlled' or 'tamed' here but are instead free to go about their lives under their own free will.

Where to Stay at Agonda Beach

The accommodation options at Agonda are mainly of a similar type. This is generally in the form of wooden beach huts or shacks. They vary in quality but most generally feature AC and a private washroom. All of the beach-facing accommodation lines pretty much the whole length of the beach and is all set back against the tree line. I like the fact that none of the hotels have been greedy by encroaching onto the beach itself. Most of the accommodation will have a dozen or so sun loungers out on the sand and some will put dining tables out on the sand at the evening time but generally the beach is kept free of clutter.

There are no super-structure hotel developments and none - as far as I'm aware - with swimming pools. It's all quite modest development - generally single storey huts and some elevated huts to first floor level. The huts at the front face out towards the sea and those behind generally face in to peaceful gardens and internal pathways.

If you can, you really should go for a sea-facing hut as, given the west-facing orientation, you are guaranteed to be looking at a beautiful sunset every single night.

For the cheaper accommodation you would look for the Beach Road which runs behind all of the beach-facing accommodation. The Beach Road is a fairly narrow road which is lined for the majority of its route with cheap eateries, shops and bars. It also features some of the cheapest accommodation in Agonda with opportunities to rent rooms in family houses or to stay in cheap, but small, guesthouses.

Here, you are unlikely to get a view of the beach of the sea and would need to walk to one of the public access routes connecting the Beach Road to Agonda Beach. The accommodation will be very basic but will be considerably cheaper.

Sharing the Beach with Anyone and Anything

If you've only ever experienced beaches in Europe and America where they are kept clean, tidy and well managed you may be in for an initial shock when you first step onto the beach in Goa. Here, the beach is shared by everyone and everything. From sunbathers to fishermen, cats to dogs, and cows to horses. All are welcome here.

The fact that the cows and dogs do their business on the beach (hey, it's a fact of nature!) can gross some people out and, well, that's fair enough. But you soon get used to it. The beach is effectively like a giant kitty litter tray so you never actually step in anything. And if you do, you just get straight in the sea.

The cows in the picture here tended to just turn up on the beach one by one every day at around the same time. This was usually around 3pm once the fierceness of the midday sun had started to die down a bit. They would just lie about until sunset and then just wonder off to somewhere else.

The dogs are also a common feature on the beach. In the west, people have been brought up to be fearful of stray dogs as they may be carrying rabies and other diseases. However, the dogs we came across on the beach were in a lovely condition and were very friendly and even somewhat protective of the tourists. Don't be surprised if a dog tags along for a walk with you are comes and lies in the shade next to your sun lounger or your table at the restaurant. I think they just enjoy the company.

Sunset over the Arabian Sea

As a result of the west facing position of the coastline at Goa, you will be treated to a spectacular sunset on each and every evening of your vacation. The sun goes down at around the time same every night which is approximately 6pm. You'll normally see a bright red glowing sun just before it disappears from view. However, due to a persistent haze over the horizon you may not actually see it dip down over the ocean.

As well as being populated with holiday-makers and tourists the beach at Agonda still serves a purpose for the locals who earn their living from the sea. Fishermen and their boats and nets can be found along the shoreline and their are also people with small passenger boats who can take you to some of the other beaches nearby including Cola Beach which is just around the corner. They're friendly people so don't forget to say hi.

All of the accommodation places along Agonda Beach have a bar and restaurant that are open to all regardless of whether or not you are paying guest. In the evening, just after sunset, some of the restaurants place tables out on the sand so that people can eat by candle-light under the stars. This is an excellent way to enjoy an evening meal. Imagine sitting under a warm star-lit sky, with the gentle sound of the waves lapping at the shore and with you bare feet on the still-warm sand.

The main speciality at Agonda Beach is fresh seafood: lobster, king prawns, kingfish, red snapper etc. My recommendation to you would be to go for the whole kingfish cooked on the tandoor and with a garlic butter rub. Oh my god, this was the best fish I have ever tasted in my life!

What does your ideal vacation consist of?