Vietnam Poisonous Snakes and Venomous Spiders and other Dangerous Animals and Insects.

Snakes and Spiders in Vietnam as wells as biting and stinging bugs & insects.

An old soldiers saying from the Vietnam war is:

There are 100 types of snake in Vietnam, 99 will poison you and the last one will crush you to death.

Although this is not altogether true, it does make a person more aware of the potentially life threatening dangers that are in Vietnam.

The climate in Vietnam varies from geographical positions within the country. Ho Chi Minh city experiences temperatures between 70 - 83F throughout the year.

The wide range of temperature allows many dangerous, poisonous and venomous species of reptiles, insects and arachnids to thrive in massive numbers.

30,000 Vietnamese farmers get bitten every year by snakes. There is no complete record as to how many people die each year.

The magnificent King Cobra is now officially the worlds largest snake which is venomous. Its can grow to be over 18 feet (5.5 meters) in length.

King cobras are fast and extremely agile and usually prey upon other snakes and rodents. There are several species of cobra snakes in Vietnam.

Instantly recognized by their 'hood', the King Cobra colors vary from black or tan to olive green.

The venom is a neruotoxin which attacks the central nervous system. Thanks to the introduction of anti-venom's, it is estimated that King Cobras are only responsible for approximately 5 recorded deaths each year.

Victims will inevitably feel severe pain around the bite wound with localized swelling and redness. This may be followed by vision problems, nausea, and temporary or permanent paralysis.

If medical treatment is not given, the victim may suffer renal failure, loss of consciousness, and then slip into a coma. After this, death may come as a result of respiratory failure.

NB: Never run from a snake as this will agitate it. Always walk calmly away, watching it until you are at a safe distance.

Along with the cobras species, the Viper family of snakes are amongst the worlds most venomous and dangerous.

This relatively small snake, 30 inches long, can be found near human dwellings as it searches for food. Its diet is usually rodents, and can be found in orchards, forests, and overgrown shrubbery.

The Malayan Viper is regarded as bad tempered and reacts viciously towards possible threats.

Unlike most other snakes, if it has been involved with biting a human, the snake could remain in the local vicinity for several hours after the attack.

The venom from this snake can cause skin necrosis. This is where healthy tissue and muscle cells are killed off, leaving large gaping wounds if not treated.

Initial bite symptoms are pain, swelling and possible nausea. There are not many recorded deaths due to this snake, and approximately only 2% of all bites will result in loss of life.

Many more Pit Viper victims have been forced to have amputations because of the lack of anti-venom. Other reasons for the amputations is the time it takes to get medical treatment when touring through a jungle.

Although not indigenous to Vietnam, it has apparently began to colonize the country. Can be found in open grassy areas, farmland, and urbanized areas.

Its diet mainly consists of rodents such as mice and rats, but will eat almost anything that moves, including squirrels and scorpions.

Its proximity to humans is based upon the waste produced by man which attracts rodents, its main food source.

Within twenty minutes of being bitten, victims may begin to bleed from the gums and even in urine. Swelling and severe pain will affect the initial bite area.

The victims heart rate will begin to fall and blistering may begin to spread along the limb which has been bitten as the venom spreads.

In 30% of cases, facial swelling and vomiting will follow. After this kidney failure and then death will occur if the bite does not receive medical treatment.

Death can occur from cardiac arrest or septicemia even after two weeks.

For victims whom receive medical treatment, the pain may continue for up to four weeks. Swelling of the limbs and torso, extreme pain, and being delirious are common symptoms.

NB: Never suck the poison from a snake bite wound. It will only spread to the other persons mouth and will possibly affect them more.

A very small spider which can pack a big punch. Between 5 - 10 millimeters in diameter, the Yellow Sac Spider was responsible for car giant Mazda to recall the Mazda 6 car built between 2012 and 2012.

These spiders are drawn to the smell of petrol. They would weave their webs inside the canister vent of Mazda 6 automobiles. This potentially caused fuel leakage and fire. Mazda recalled their vehicles for software updates to alert owner of potential fires.

The venom from a Yellow Sac Spider is necrotic, and the potency of the venom has been disputed by scientists.

Once bitten, victims will initially feel moderate pain around the bite area. Slight swelling then possible nausea may follow.

Necrotic toxins kill off living tissue, possibly leaving gaping wounds around the bite area if treatment is not sought as soon as possible.

Seeking medical aid in Vietnam whilst off the beaten track is not impossible, just not practical.

The list of spiders in Vietnam include the awesome and formidable tarantula spider. With an average size of 15cm, this species of spider in VN is not considered dangerous.

The Vietnamese Tarantula (Haploelma) feeds on mice, cockroaches and other insects.

They have on occasions entered human habitats but really possess no threat. It is their general size and bulk that scares most people.

The mosquitoes in Vietnam's' rural areas carry the Malaria and Dengue diseases.

This does not mean that if you are on vacation in Vietnam's main cities that you will not contract Malaria.

Mosquitoes, like rats and cockroaches, are a big problem in the climate of Vietnam.

Mosquitoes cause almost 3 million deaths every year, and affect over 400 million people.

Malaria can flare up and kill a person even weeks after their vacation has ended and they back at home.

NB: It is essential to receive vaccinations at least six weeks prior to leaving for Vietnam. Also to use mosquito and insect repellents continuously whilst on holiday.

Humans are the biggest threat to vacations in Vietnam. There are severe penalties for locals 'attacking foreigners' but 'ripping them off' is less severe.

There is a blight in Vietnam with which the government can do nothing about. Bag snatching, pickpockets, and room or home burglaries statistics are through the roof.

Many bag snatchings' are carried out by two people on mopeds. Pickpockets in Vietnam have become experts and also work in pairs or gangs.

Big cities such as Hanoi and Ho Chi Minh City attract most thieves because of the amount of tourists that visit them.

As people arrive at the airport until the time they leave, they are constantly targeted. Beggars are virtually everywhere within the main cities. Many are part of a gang and American and British tourists are considered to be walking cash machines.

It is alleged that many cab drivers rip off tourists. The usual trick of over-charging and going the long way is just the tip of the iceberg.

Organized crime including selecting victims to be robbed at a later time, and taking clients to 'out of the way' areas to be mugged are also problems in Vietnam.

The traffic is horrendous as is the choking fumes at street level. Many drivers ignore the road signs, traffic lights, and any other type of vehicle control methods.

Vietnam has the highest number of traffic related deaths in the world.

Passports will need to be handed into the hotel on arrival. This is so you can easily leave the country even if you have been robbed of everything else.

Always be alert at every stage on your vacation.

Like many other countries, some of the police in Vietnam are receiving backhanders. Pulling over unsuspecting tourists and fining them for different traffic violations is the typical method.

In some cases the hire vehicles have been impounded until an amount of money is paid in cash.

Upon approaching the legitimate police, it is often discovered that there is no record of a violation, impounding, or money received for any fines.

Rabies can come from dogs and bats as well as other various mammals. The CDC recommends that tourists get the vaccine prior to leaving their own country.

You cannot get yellow fever in Vietnam, but visa requirements may insist on you having a yellow fever vaccine and able to show proof on arrival at the airport.

This can be obtained through contaminated needles, blood products or having unprotected sex. If you have not had a vaccine, you are advised to get one. If you require medical treatment in Vietnam, then also ask for a vaccine shot.

This can be contracted through drinking water or contaminated food. It is recommended that all visitors to Vietnam receive this vaccination.

Again contracted through food and water and requires a vaccine several weeks prior to leaving home. 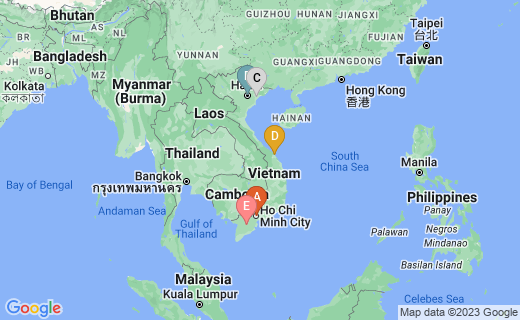 E
can tho:
Can Tho, Ninh Kiều, Can Tho, Vietnam