Vikings in Oklahoma: Norsemen and the Heavener Runestone

Eric Standridge is a historian and author that focuses on Oklahoma's history, with an emphasis on LeFlore County and Poteau, Oklahoma.

From Europe to America

The Vikings have landed in Oklahoma.

To be more specific, they have landed in Heavener, Oklahoma. We can only speculate as to why they came, but many archeologists agree that there were, in fact, Vikings in Oklahoma.

It has been proven that Vikings have visited North American several times in our past. According to Icelandic Sagas, around 985 A.D., Bjarni Herjolfsson, a Norse settler to Greenland, was blown off course and sighted a continent west of Greenland. His wild ride inspired other Vikings to search for this new land. Nearly fifteen years later, Leif Eriksson finally explored the new continent. For the next ten years, a great number of voyages were made to the new land, which the Norsemen called "Vinland." Archeologists have extensively explored and documented the Viking settlements in Greenland and others in North America.

Once established in Newfoundland and Nova Scotia, these brave Vikings began to explore other parts of this vast new world. It is believed that one of these ships traveled south along the Atlantic coast, into the Gulf of Mexico, up the Mississippi River and into the Arkansas River between 900 A.D. and 1000 A.D., although their exact route is still unknown.

One can almost imagine the Norsemens excitement as they paddled their longboats south into warmer climates, leaving behind the harsh conditions of frigid north. The lands around present day Oklahoma must have seemed like a great paradise, and could even be called the home of Idun, the Norse goddess of spring and immortal youth.

Rediscovery of the Runestone

In a deep ravine surrounded by breath taking forests, the Vikings erected a huge stone pillar. This pillar rises from the ground like a sentinel, having kept watch over these ancient woods for hundreds of years. Measuring 12 feet tall, 10 feet wide, and 16 inches thick, the pillar has several carved symbols known as runes deeply chiseled into its face.

The Heavener Runestone remained hidden within the deep ravine for hundreds of years. It wasn’t until around 1838, when thousands of Native Americans were forcibly moved from Tennessee into Eastern Oklahoma, that the runestone was first “discovered”. The early Choctaws and other settlers in Indian Territory stumbled upon the runestone while exploring the area around present day Heavener. Word spread quickly about this strange pillar, and it was quickly dubbed “Indian Rock” by European settlers, even though they knew the carvings had nothing to do with the Indians.

As the area attracted more settlers, more runestones were being discovered. In the 1920s, a curious Heavener settler sent copies of the runes to the Smithsonian for identification. The Museum deducted that the writing was Norse, but at that time, the Smithsonian could not prove the authenticity of the runestones. Representatives of the Smithsonian were dubious as to the historical accuracy of the runestones, implying that a Scandinavian settler must have made the carvings by working from a primary school grammar book from his homeland.

Unfortunately, many of these Viking runestones were destroyed early on by treasure hunters. The same fate might have befallen the Heavener Runestone if not for the efforts of Gloria Farley.

In 1928, Carl F. Kemmerer, the same man who sent copies to the Smithsonian, took a skinny little girl, Gloria Stewart, to the present day Heavener Runestone site. His daughter was so impressed by the beauty of the secret place and the mystery of the writing, that she devoted most of her life in research, seeking to understand the lost meaning of this massive stone.

Twenty years later, Gloria Stewart Farley would finally begin her in depth research of the Indian Rock. Her fascinations with this mysterious piece of history lead to many important discoveries, and the official renaming of the Indian Rock to the Heavener Runestone in 1951.

During her 38 years studying the runestone, Steward also discovered four more examples of Viking Runes carved into the Oklahoma landscape. These four stones form a straight line, suggesting that they could have been left as trail markers by the Vikings towards the end of their explorations, and serving to signify that this land belonged to the Norsemen.

Although there is no test to determine the true antiquity of an inscription on stone, the weathering of the edges of carving in relation to the hardness of the stone and the exposure to the elements is an acceptable guide.

Having paved the way, Stewart encouraged others to study the Heavener Runestone in depth. Scholars had been perplexed because the runes seemed to be a mixture of two ancient runic alphabets: six from the oldest Germanic writing which came into use about 300 A.D., and the second and last runes from a later Scandinavian writing that had been used around 800 A.D.

Dr. Richard Nielson of the University of Denmark dates the Heavener Runestone to around 800 A.D., and translates the lettering as a name, “GLOMEDAL”.

In 1967, a cryptanalyst by the name of Alf Monge, former U.S. Army Cryptographer, born in Norway, deciphered the runes as a date: Nov. 11, 1012. Further examination of the Heavener Runestone by Monge revealed that the correct transliteration is “GAOMEDAT”, instead of “GLOMEDAL”, as Neilson wrote.

Alf Monge further stated that the letters would not translate into sense because they were used as numbers according to their place in the two alphabets. By simply substituting the letters with numbers, this did not give the date directly, but had to be used in the form of a very complicated Norse Runic “cryptopuzzle”, which had been invented by ancient Norse clergymen to hide a date in the puzzle.

By using this method, Monge said the Heavener Runestone inscription is the date of November 11, 1012. As this date did coincide with a Norse settlement on the Atlantic coast established in 1008, and there was some indication that the four ships did not all return to Greenland, this date was the most feasible explanation which had been presented at this time.

Most archeologists now believe that the stone is an ancient land claim marker.

While nothing has been proven definitively, it is almost certain that the Norse Vikings did venture into Oklahoma. 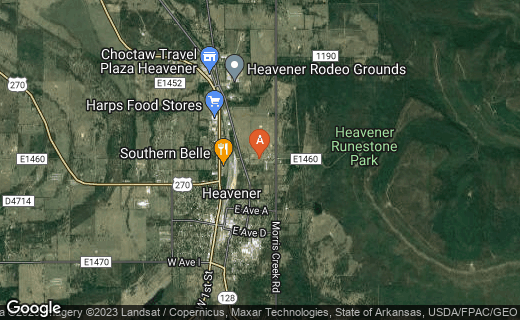