At Sutter's Fort in Sacramento, California people are able to take a trip back in time. The entire structure has been reconstructed and furnished with items that give it the appearance of being in the 1840s. The fort was built close to the Sacramento and American Rivers. It is located at the junction of L and 27th streets in the city of Sacramento. In 1961, Sutter's Fort was designated a National Historic Landmark. It holds the designation of being the oldest fort in the United States to be completely restored.

The fort was built in the late 1830s by John Sutter. It was initially referred to as New Helvetia or New Switzerland by Sutter. It was designed to be a trade and agricultural colony. At the time of its construction, Fort Sutter was located in the Mexican Alta California Province. It had the distinction of being the first non-indigenous community in the central Valley of the California Province. The fort was popular during its time of operation because of being so close to the end of the California Trail and Siskiyou trail. Sutter's Fort is recognized for its historical association with such well-known California events as the California Gold Rush, Donner Party as well as the formation of the city of Sacramento.

When John Sutter and his family arrived in northern California, it was a province of Mexico. The population of the area consisted of approximately a thousand Europeans and over 650,000 Native Americans. Sutter approached the Mexican governor of the territory with a plan of establishing a colony. The governor agreed to the plan, but in order to qualify for owning land, Sutter and his family would have to reside in the area for twelve months and then obtain Mexican citizenship. Sutter became a Mexican citizen in 1840. Construction on Sutter's fort began in 1839. The fort was finished being constructed in 1841 and Sutter received title to over 48,800 acres surrounding the Sacramento River.

The main building at Sutter's Fort is an adobe-style structure. It is two stories high and was completed shortly after 1841. It is the only building in the current reconstructed Sutter's Fort that has survived since the time the fort was built. This building is where John Sutter had a secret meeting with James Marshall in 1848. At this meeting, Marshall provided the details of the gold he had discovered a few days earlier. He had been building a sawmill for Sutter near the American River. Soon the discovery of gold in California was known all over the country. Two years after this event, Sutter's Fort was abandoned. Neither James Marshall nor John Sutter received any benefit from the gold found on the property. Sutter's Fort soon began to deteriorate from lack of care.

When the news of gold being discovered became known, hundreds of thousand of people came to California to strike it rich. Individuals came from all over the United States as well as many other countries. These people were often referred to as forty-niners. This was in reference to the gold rush starting in 1849. People came by sailing ship, covered wagon or on a single horse. There were a lot of hardships associated with making such a trip to California. In the beginning, gold nuggets could be picked up from the ground. People also would go to riverbeds and streams and use pans to get gold. Eventually, mining companies came in and purchased many of the gold fields. At the end of the gold rush, many of the participants went home with nothing more than what they possessed upon arriving in California.

This was a group of American pioneers traveling to California using a wagon train. They made a number of crucial mistakes on their journey. The group ended up spending a winter during the 1840s in the Sierra Nevadas. This is a place where snow is heavy and cold temperatures are common. Desperation set in among these pioneers. Some were left with no other choice but to resort to cannibalism as a way to survive. The Donner Party wagon train was going slowly because they chose to cross the Wasatch Mountains in Utah. They then planned to go along the Great Salt Lake. The terrain was difficult. The pioneers lost a number of cattle, and the group began to split up. They made it to the Sierra Nevada in November of 1846. They experienced very harsh winter conditions. In December of that year, some members of the group left on foot to get help. A group of rescuers came from Sutter's Fort in California and could not reach the Donner Party until February of 1847. The original group consisted of 87 people. When it was over, only 48 survived and were able to make it to California. Most of them had resorted to eating the dead to survive.

Native Sons Of The Golden Western

This organization was created in 1891 with the purpose of safeguarding California's landmarks from the state's pioneer days. There was a time when the city of Sacramento was going to demolish Sutter's Fort. The Native Sons of the Golden West purchased the structure and land. It then started the process of rehabilitating Sutter's Fort in 1893. During the next fourteen years, members of the organization reconstructed the fort's walls and other buildings. They worked hard to make certain it was like the original structure. In 1907, Sutter's Fort and the property was turned over to the state of California for maintenance and administration.

This program enables students to spend a 24 hours at Sutter's Fort. This includes an overnight stay. Students have a chance to portray characters from the 1840s. They are also able to participate in period activities such as candle-making, baking and more.

This program makes it possible for students to spend 8 hours at Sutter's Fort. During this time, they will portray characters from the 1840s. The students will do period activities such as carpentry, baking and more.

A teacher and their class are taken back to the 1840s. A class will be able to participate in four different interpretive stations. These stations are designed to show the many operations taking place at the fort.

During this program, participants are able to experience a 45-minute hands-on program This program was designed for grades 4 to 6.

Children are able to learn about life as a pioneer child from a child's perspective. There are even dinners cooked in the same way as the pioneers did it.

Open daily from 10 am to 5 pm. Sutter's Fort is closed on Thanksgiving, Christmas and New Year’s Day. 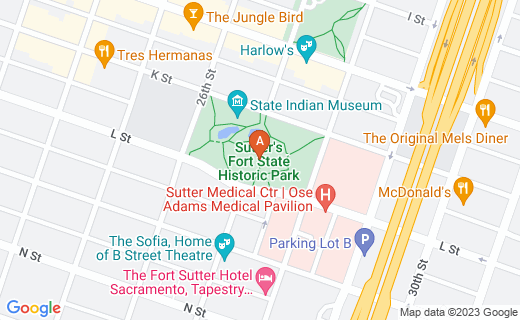