Located in Dearborn, Michigan is a huge indoor and outdoor history museum complex called, the Henry Ford Museum and Greenfield Village. It is named after automobile manufacturing legend Henry Ford. The automobile industrialist was known for his desire to preserve items from history. The museum chronicles the development of the United States from a rural society to an industrial one. It contains exhibits that show the evolution of everything from transportation to communication, domestic life and more. Visitors to Greenfield Village are able to see over 79 well-known historic structures. This includes Thomas Edison's laboratory, the shop where the Wright brothers built the first plane, a courthouse from Illinois where Abraham Lincoln practiced law and more.

He was an industrialist who found the Ford Motor Company. Ford did not invent the automobile or assembly line. He did create and manufacture the first automobile that could be purchased by most middle-class Americans. This changed the car from a special experience to something commonly found everywhere. It revolutionized transpiration in the United States. The term “Fordism” came to be known as mass production of goods that were inexpensive for consumers to purchase. Ford developed a franchise system that dramatically increased the number of car dealerships in North America. His dedication to lowering productions costs and providing high wages for workers made him an American icon.

The Henry Ford Museum got its start from the personal collection of historic items owned by Henry Ford. The collection began as early as 1906. The museum's complex now spans approximately a dozen acres owned by the Ford Motor Company. The museum began as the Edison Institute and was dedicated during October of 1929. The institute initially consisted of the Greenfield Village Schools, which was an experimental learning facility as well as the Henry Ford Museum and Greenfield Village.

Visitors begin their experience by going past the Josephine Ford Memorial Fountain as well as the Benson Ford Research Center. The Greenfield Village sits on over 239 acres. Approximately a hundred buildings with historical significance were transported to the area from other locations. The buildings are situated in such a way as to provide visitors with a village atmosphere. The reason is to illustrate structures in the United States starting in the 17th century and moving into present day. Some of the structures have people wearing period costumes and performing period tasks. People can see sewing, farming, cooking and more. There are also buildings where visitors can watch crafts being made as was done centuries ago. People can see individuals make things in tin shops, pottery making as well as glass-blowing and more.

Some of the many exhibits people can see at Greenfield Village are Henry Ford's prototype garage were the Ford Quadricycle was created. From Columbiana, Ohio the Harvey Firestone family farm was transported to the village. This exhibit took years to disassemble and then rebuild at the Greenfield Village. There is a working sheep farm at this family farm. The office of the horticulturist and American botanist Luther Burbank is also here as well as many other exhibits.

This is the world's best known automotive exhibitions. It has a significant collection of historic vehicles. Visitors can see authentic items, participate in interactive play, see digital media and more. People can learn about the huge influence the automobile has had on the development of the United States and American culture. There are at least a dozen kiosks with interactive activities. Getting there enables is a kiosk that enables people to follow three different individuals as they went to work and vacation in 1910. Rivers, Rails, and Roads provides people with a map-based activity that teaches about the development of transportation modes and routes. Help Henry Innovate gives visitors the opportunity to test new automobile ideas and innovations that created the Ford Model T. There are also a number of other kiosk experiences.

Visitors to the museum are able to see the largest steam-powered locomotive ever built. It was manufactured in 1941 and weighed over 590 tons. The Allegheny locomotive was designed to pull large coal trains over the mountains in West Virginia. It was able to obtain speeds of 55 mph and more. This is the centerpiece of the Henry Ford Museum's train collection. There were approximately 60 Allegheny Locomotives built between 1941 and 1948. There are currently only 2 Allegheny Locomotives still in existence. One is at the Henry Ford Museum, and the other is at the Baltimore & Ohio Railroad Museum located in Baltimore, Maryland.

This is considered a symbol from the American West. These stagecoaches were manufactured in New England. They were initially built during the 1820s. They provided users with an innovative suspension system that gave special support for the coach's body. Passengers who used this stagecoach experienced a rocking motion instead of the harsh jolts provided by bumps in the road. This type of stagecoach was sold in foreign countries such as Australia, South Africa, and South America. The one visitors see in the Henry Ford Museum was built in 1891.

Visitors can see the Kennedy Presidential Limousine that was built by the Ford Motor Company. It is a 1961 four-door Lincoln Continental convertible. A company called Hess & Eisenhardt customized the car so it could be used as a presidential parade limousine. It was cut down, reinforced, had its length extended among its many modifications. The car was always owned by the Ford Motor Company. The limousine was leased to the U.S. Secret Service for $500 a year. The limousine on display at the museum was modified with removable overhead steel panels containing transparent plastic. It was given retractable steps for Secret Service agents. The limousine was given interior floodlights, auxiliary jump seats and more.

This tour is self-guided. There are five different experiences provided for visitors. There is the Legacy Theater where people can see rare historic footage. There is the Manufacturing Innovation Theater, an exciting manufacturing experience, the Assembly Plant Walking Tour, as well as Legacy Gallery.

This place has an impressive collection of documents that cover the uniquely American experience. This is a research library. It enables people to access an extensive collection of more than 25 million artifacts. The conservators preserve object and materials to be used in living history programs. There are artifact collections, library and archival collections, oral histories as well as images and video available for viewing.

Closed Thanksgiving, Christmas and the last Monday of January 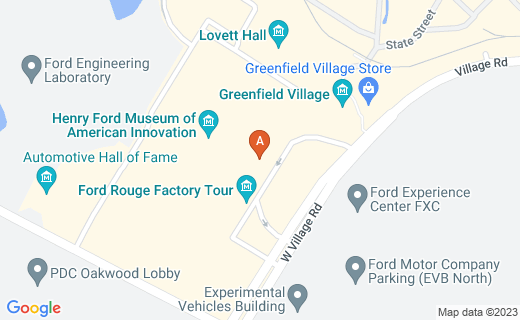