Located in Santa Fe, New Mexico is a beautiful building that serves as the New Mexico State Capitol. It's a fascinating structure that is the only round state capitol building located in the United States. Some refer to the building as the roundhouse. The building has extensive marble-work throughout it. It contains over 230,000 square feet of marble. This was done at a cost of more then $4,600,000. The building was designed to look like the Zia Sun Symbol when viewed from above. The building has four entrance wings that extend from the main cylindrical area. The Zia are an indigenous tribe located in New Mexico. They are recognized for their pottery making as well as the use of the Sun symbol. They are part of the larger Pueblo Indian community.

The architectural style of the New Mexico State Capitol is a combination of the New Mexico territorial style with a feeling of neoclassical. There is a stone carving of the State Seal of New Mexico located above all the entrances to the building. It has four levels with one of them being beneath ground level. The building was dedicated in 1966 and was designed by Willard Carl Kruger and built by Robert E. McKee.

Kruger was an architect who was born in Texas in 1910. He grew up in Raton, New Mexico. He was the founder of the architectural firm Willard C. Kruger and Associates. Many of the projects completed by Kruger's company are listed with the National Register of Historic Places. He served as New Mexico's state architect during the late 1930s. In addition to designing the New Mexico Capital building, his firm also designed the Las Vegas Municipal Building, Carrie Tingley Hospital for Crippled Children as well as the Clayton Public Library and other.

The building is home to the New Mexico State Legislature. The first floor is below ground level. Located here are the semicircular state House and Senate chambers. This part of the building is not accessible to the public. The ground floor is considered the second floor. This is where people can enter the building. Located on this floor are a number of art galleries. It is possible for people to see the state House and Senate chambers located on this floor. On the south side of the building is the House gallery, which seats over 280 people. On the north side of the building is the Senate gallery and it seats over 205 people. The top two floors consist of mostly administrative offices. On the third floor are the offices for the legislative committee. On the fourth floor are the offices for the Legislative Council Service, Lieutenant Governor as well as New Mexico's State Governor.

In the center of the New Mexico State Capital is the Rotunda. It is 60 feet high and approximately 49 feet in diameter. It starts on the second floor and goes all the way to the top of the building. The Rotunda was constructed with travertine marble. This is a type of marble that is native to New Mexico. The Great Seal of New Mexico is located in the center and made with inlaid turquoise and a brass mosaic. The rotunda's ceiling skylight is pale pink and stained glass. These colors represent the earth and sky. The skylight is designed to resemble an Indian basket weave. On the fourth floor balcony are the flags of New Mexico's 33 counties. They are on permanent display in the capital rotunda.

Outside The Capital Building

Around the outside of the New Mexico State Capital is a beautiful garden that is approximately 6.5 acres. It contains over 100 species of plants such as almonds, Russian olive trees, roses, nectarines as well as sequoias and more. There are also a number of statues of native Pueblo peoples. These statutes show the native Pueblo people hunting, carrying pottery and more.

In 1992, there was a renovation done on the New Mexico State Capital. It consisted of an expansion of committee rooms as well as asbestos abatement, electrical, mechanical improvements and more. The accessibility for handicapped individuals was greatly improved. There was also a rededication of the building in December of 1992.

The Capitol Art Foundation was created by the New Mexico Legislature in 1991. Since that time, the foundation's work has become one of the building's most popular features. It was started to help with obtaining pieces of art for public display in the State Capitol on a permanent basis. The artwork currently found at the State Capitol building consists of the contemporary masterwork from artists who reside and work in New Mexico. The art collection found at the Capitol is displayed throughout the public areas of the State Capitol building. The art collection has a number of different styles, media, and traditions. It also includes groups of handcrafted furniture. The Capitol Art Foundation continues to obtain, exhibit, preserve and promote works of art. The art collections are intended to represent the cultures, history and any art forms that represent the people of New Mexico.

A result of the U.S.-Mexican war (1846-1848), the United States obtained the property that would become New Mexico. Three months after the start of the war, an army from the United States went into the territory and took possession of Santa Fe and the rest of the land. The treaty of Guadalupe Hidalgo ended the war. In 1850, the Congress of the United States passed the Organic Act. This created the Territory of New Mexico. This authorized the creation of a new civil government. Starting in 1850 there were a number of attempts to make New Mexico a state. New Mexico obtained statehood in 1912. In October of 1910, hundreds of elected representatives from every county in the New Mexican territory met at Santa Fe. They wrote a constitution that was approved by voters in 1911. William H. Taft was the United States President at the time. In 1912, he signed the proclamation officially admitting New Mexico as the 47th state in the union. 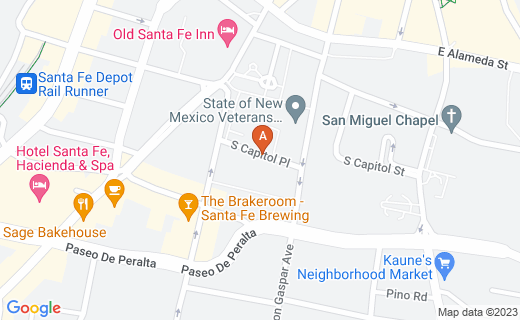