Visit The Rock And Roll Hall Of Fame And Museum

Devoted followers of Rock and Roll music need to make a trip to the shore of Lake Erie in downtown Cleveland, Ohio. This is where they can visit the Rock and Roll Hall of Fame and Museum. It was created for the purpose of preserving the history of the most influential Rock and Roll artists, engineers, producers and more. These are people who have had a huge impact on the music industry. The museum has Hall of Fame inductions but also carefully records the history of rock and roll. Those who have been inducted can be seen in a special exhibit area of the museum that extends over Lake Erie.

In 1983, Ahmet Ertegun, founder and chairman of Atlantic Records started the Rock And Roll Hall of Fame Foundation. Ertegun gathered together a distinguished team of professionals to make his dream a reality. Some members of the foundation were Jann S. Wenner, who was the publisher and editor of Rolling Stone magazine, record executives Seymour Stein and Bob Krasnow as well as experienced attorneys. Musical artists began being inducted into the Rock and Roll Hall of Fame in 1986. It did not have a physical location at the time. Several cities were under consideration for the home of the Rock And Roll Hall of Fame. Cleveland felt a local radio disc jockey from their city started the phrase “rock and roll.” He worked hard to promote this type of music. The disc jockey's name was Alan Freed. Cleveland also pointed out it was the location of the first major rock and roll concert. The concert was known as Alan Freed's Moondog Coronation Ball. Cleveland also had a number of radio stations that helped to promote major rock and roll performers during the 1970s and 80s. Some of the musicians that went on to become big stars were people like Bruce Springsteen, David Bowie, the group Rush and many others. A petition was circulated and signed by hundreds of thousands of people to have Cleveland be the site of the Rock and Roll Hall of Fame. When the newspaper USA Today did a poll in 1986, Cleveland was voted as the place where it should be located. Cleveland was officially chosen as the home for the Rock and Roll Hall of Fame in May of 1986.

The Rock and Roll Hall of Fame and Museum was officially dedicated in September of 1995. There was a ribbon cutting ceremony that included such well-known musicians as Little Richard, Yoko Ono, and others. Thousands of people gathered together on that day to enjoy the opening ceremony. On the night of the dedication, an all-star concert was held. Performers at the concert included Jerry Lee Lewis, Chuck Berry, Aretha Franklin and others.

Inductees into the Rock and Roll Hall of Fame are determined by a committee of rock and roll historians. Names are selected from a performer category. This includes bands, vocal groups, instrumentalists and more. Once the names are selected, hundreds of experts from all over the world cast their votes to determine who is admitted into the hall of fame. A performer can become eligible 25 years after their first record is released. The impact and significance of a performer's contribution to the development and promotion of rock and roll are taken into consideration. A performer must obtain the highest number of votes as well as get over 50 percent of the votes. Every year between five to seven performers are inducted into the Rock and Roll Hall of Fame.

There are several levels inside the Rock and Roll Hall of Fame. The main gallery is on the lower level and is called the Ahmet M. Ertegun Exhibition Hall. Visitors who enter here are able to see the beginnings of rock and roll music. It provides exhibits of blues, gospel, bluegrass and more. There are also exhibits designed to show the cities around the United States that were a major influence in promoting rock and roll music, Cities such as Detroit, Memphis, Liverpool, Seattle and others. There is also an exhibit about Cleveland's legacy when it comes to rock and roll. There are also exhibits dedicated to individual musicians such as Jimi Hendrix, David Bowie, and others. There are two theaters in this hall. Visitors can see a film about the beginning of rock and roll as well as other aspects of the music genre.

This is the entrance level. A stage located in this part of the museum is utilized for different types of special performances during the year. There is a section on this floor called Right Here, Right Now and provides information on contemporary artists. The second floor provides visitors with the opportunity to experience a number of interactive kiosks. Some of the programs are Songs That Shaped Rock And Roll, One-Hit Wonders and more. The second floor is also where rock and roll artifacts from such well-known members of the industry like Les Paul, Sam Phillips, and others are located.

This part of the museum is where the actual Hall of Fame is located. Visitors are able to see a wall that contains the signatures of all the Hall of Fame inductees. There is also a theater where people can see films about inductee's and musical highlights from their careers. People exit the Hall of Fame on the fourth floor. On this level is the Foster Theater. It is a 3-D theater used for various events and special programs.

This part of the Rock and Roll Hall of Fame is where people can see temporary exhibits that are large in scale. Over the years, a number of different exhibits have been put on display on this level. They have included exhibits about the Who, U2, Bruce Springsteen, the Rolling Stones and more.

The Rock and Roll Hall of Fame Library contain historical artifacts from rock and roll music. The archives found here are considered to make up the most extensive repository of materials concerning the history of rock and roll music. The library is located in a building at Cuyahoga Community College. The library's focus is the collection and preservation of these materials. They also work to archive them, so they are available for historians, educators, scholars as well as members of the public now and into the future. There are two levels within the library. People can come in and read magazines, books, listen to music and watch films about the history of rock and roll. People wanting to conduct serious research will have to make an appointment with the library to see its vast archival collection. When anyone uses the archived materials, a library supervisor will be with them.

Rock and Roll Hall of Fame and Museum

Open Saturdays until 9 pm from Memorial Day through Labor Day

Location Of Rock And Roll Hall Of Fame And Museum 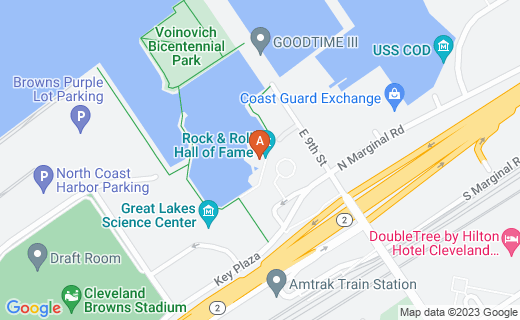 The Milestones of Rock & Roll: The Events that Changed the History of Music
Buy Now