Visitors to downtown San Diego are able to experience a very special maritime museum. It can be found off of a Navy Pier and is an actual aircraft carrier. The USS Midway has the distinction of being the longest-serving aircraft carrier in the U.S. Navy during the 20th century. It was an active Navy vessel from 1945 until it was decommissioned in 1992. The number of sailors who served aboard the USS Midway is estimated at 200,000. This is the only U.S. aircraft carrier to be available during the entire cold war and longer.

The USS Midway started being used as a museum during June of 2004. The number of visitors to the USS Midway museum exceeded a million by 2012. This has earned it the title of most popular naval warship museum in America. It has over 12,500 members and hosts hundreds of events each year. Official Naval ceremonies such as Navy changes of command, retirements, re-enlistments and more take place on the USS Midway. It's estimated that tens of thousands of students take field trips to the museum and thousands of children participate in an overnight program annually.

This US Navel vessel was launched during March of 1945 and commissioned during September of 1945. Its first overseas deployment took place during October of 1947. Pilots from the USS Midway flew combat missions in the South Pacific during the Korean War between 1954 and 1955. In June of 1965, pilots from the USS Midway successfully engaged in the first areal combat of the Vietnam war. During August of 1990, the USS Midway participated in military operations off the coast of Saudi Arabia. Planes from the aircraft carrier flew in a number of combat missions in the Persian Gulf during 1991. The USS Midway was decommissioned during April of 1992. The ceremony was held at the US Naval Air Station North Island.

Most people who visit the USS Midway Museum will spend over 3.5 hours exploring the floating city. Exhibits include everything from the crew's sleeping quarters to the massive galley. This is where thousands of hungry sailors were fed every day. There is also the ships brig, officer's country a post office and more. Visitors can see the ship's machine shops as well as the ready room where pilots got instructions before flying combat missions. It's also possible to see the bridge. It is located in the island structure in the middle of the flight deck. There are a number of volunteers around the ship who provide interesting stories as well as impressive statistics concerning the USS Midway.

Visitors are able to see expertly restored aircraft that span the decades. Planes from as early as World War II and as recent as Operation Desert Storm are able to be viewed at the USS Midway Museum. Some of the aircraft on display are the SBD Dauntless dive bomber from World War II. There is the F9F-8P Cougar, and the F9F Panther used during the Korean War. An F-4 Phantom and Huey gunship utilized during the Vietnam War are available for viewing. From the era of Desert Storm visitors can see the F/A-18 Hornet as well as an A-6 Intruder. It is possible for visitors to climb into the cockpits of these aircraft. Air restoration teams from the USS Midway Museum are always working on different vintage aircraft to expand the number of planes used for display.

When people enter the USS Midway Museum, they are able to participate in a self-guided audio tour. It enables people to see over sixty different locations aboard the ship. When people make the effort to stop at every location provided by the audio tour, it will take them approximately three hours to complete. The audio tour makes it possible for people to decide where they want to visit and how much time they want to spend on the tour. Visitors can download an audio tour map that is narrated by sailors who served aboard the USS Midway. This tour makes it possible for people to get a better understanding of what life was like aboard the aircraft carrier. It was common for sailors to be on the ship several months at a time when at sea.

This is an opportunity for visitors to experience a state-of-the-art pilot simulator. Participants are able to experience the excitement of aerial combat as they control the action. Those who are in the simulator can experience what it is like to pilot a plane that can somersault, roll, spin as well as do loops during a combat mission. This simulator takes visitors on a first-come, first served basis. It is possible to purchase prepaid discount tickets to experience the Air Combat 360 simulator.

There is a group of simulators in the museum that can accommodate up to a dozen guests simultaneously. It is called Naval Combat Mission. Individuals are able to experience a combat mission during Operation Desert Storm. They will feel the pressure from a launch off an aircraft carrier while piloting an F18 Hornet. They will experience maneuvering the plane between objects in a canyon to avoid enemy radar on their way to an objective. During this simulation experience, people will participate in air-to-air combat as well as evade enemy missiles. Individuals will hear recordings of actual pilot conversations that took place during Operation Desert Storm.

This is a theater located in the museum that has approximately 90 seats. It provides all who go there with an exciting multimedia movie that covers the Battle of Midway. This was a crucial naval battle that took place in the Pacific during World War II. The American Navy was able to conclusively defeat a naval fleet from the Imperial Japanese Navy. The Japanese were never able to recover from this defeat. Codebreakers from the United States discovered the location and time of the planned Japanese attack. During the battle for Midway, all four of Japan's aircraft carriers and a heavy cruiser were sunk. Four of these Japanese aircraft carriers had participated in the attack on Pearl Harbor. The United States Navy only lost the carrier USS Yorktown and a destroyer.

There is a gift shop on the USS Midway Museum. It is located on the ship's hanger deck. This is the place where sailors would work on the engines of the many planes aboard the ship. The gift shop provides a wide variety of apparel as well as DVDs, CDs, books and memorabilia specific to the USS Midway.

Last Admission is at 4 pm 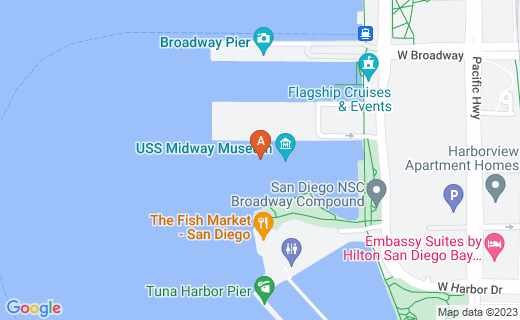