Visit the Coral Castle and Witness an Amazing Engineering Achievement

A Latvian American named Edward Leedskalnin created the limestone structure known as the Coral Castle. It is located in Leisure City, Florida. The grounds have a number of huge structures made from megalithic stones. This material is limestone formed from coral. It is known as oolitic limestone. Each of the structures is estimated to weigh several tons. The area has over 1,000 tons of stones that have been formed into furniture, carvings, walls, a castle tower and more. There are a number of legends surrounding the structures at the Coral Castle. Many claim Edward Leedskalnin was able to build the many structures at the Coral Castle by using reverse magnetism. Some even claim he used supernatural abilities to move blocks of stone weighing several tons and then carve them.

According to what is known about Leedskalnin, he was rejected by his fiancee Agnes Skuvst in Latvia. She was 16-years-old and left him a day before their wedding. He was heartbroken and left for the United States. When he got to America, it is said he came down with terminal tuberculosis. It is also alleged that Leedskalnin was able to regain his health by using magnets that eliminated his disease. All of the structures located at the Coral Castle took him more than 27 years to build. Leedskalnin refused to permit anyone to see him work. Local teenagers claimed to have been unnoticed as they watched him work. They said that Leedskalnin was able to move a huge block of coral as if it was a hydrogen balloon. According to Leedskalnin, the only tools he used to create the items at the Coral Castle was a perpetual motion holder.

The Coral Castle was initially constructed in Florida City, Florida during 1923 and it was called “Ed's Place. Ruben Moser and his wife were friends of Leedskalnin and helped him recover from tuberculosis. They sold him the land where the construction of the Coral Castle was started. This was an extremely remote area. In 1936, Leedskalnin decided to move the objects he made for the Coral Castle to its current location on South Dixie Highway in Miami, Florida. It took approximately three years for Leedskalnin to move everything to the Coral Castle's new location ten miles away. The new location was named “Rock Gate.” This was based on the large swinging gate in the back wall. Edward Leedskalnin continued to work on the Coral Castle until he passed away in 1951. The newer pieces were quarried on the property located at Dixie Highway. Many of them were dug a short distance away from the walls of the Castle. The pit and the pool located at the southern portion of the wall were quarries. The other quarries located on the property were filled in.

There are many features at the Coral Castle which are impressive construction and carvings. There is a castle tower that is two-stories high. This is the place that was used as living quarters by Edward Leedskalnin. It has walls made from stone that are eight feet high. There is also a sundial known for its accuracy. Visitors can also see a number of other things made from oolitic limestone such as a barbecue, water well, a fountain, many different types of furniture and more. There is a table that is in the shape of a heart, a table shaped like Florida, a bathtub, throne as well as over twenty rocking chairs. Each object is made from a single piece of stone. The weight of each piece is over 14 tons.

The most well-known feature of the Coral Castle is the revolving gate that is eight feet tall and weighs more than eight tons. It has been the subject of television programs such as “That's Incredible” and others. The gate at the Coral Castle was carefully carved to fit within a quarter inch on the walls near it. It is exceptionally well-balanced. The gate weighed thousands of pounds but was able to be opened when a child pushed it. The perfect balance of the gate and its ease at being moved remained a mystery for decades. Unfortunately, it stopped working in 1986. The gate was then removed using a 50-short ton crane and half a dozen men. When this was done, engineers were able to figure out how the gate had been balanced so perfectly. A hole had been drilled from the top to the bottom of the gate, and a metal shaft had been inserted. The gate was resting on an old truck bearing. When the truck bearing became too rusted, the gate was unable to move. A complete new shaft and bearings were installed. The gate was then set back into place. It again stopped working in 2005 and was once again repaired. The gate still does not move with ease as it did before 1986.

How one man could construct something like all the items at the Coral Castle by himself remains a mystery. Many people asked Edward Leedskalnin how he was able to move such large objects by himself. His response always consisted of saying he had a good understanding of the laws of weight and leverages. Leedskalnin left no written documents concerning his work. He did write pamphlets. Leedskalnin wrote three pamphlets on “Mineral, Vegetable, and Animal Life” as well as “Magnetic Current.” This provided information on his views concerning life's cycle. “A Book in Every Home” covered his domestic as well as political views concerning the girl who had left him. How Edward Leedskalnin built the many items at Coral Castle by himself continues to mystify scientists as well as engineers around the world.

Edward Leedskalnin became ill during December of 1951. He took a bus to the Jackson Memorial Hospital in Miami. Three days later, he passed away at the age of 64. The Coral Castle then was then owned by Leedskalnin's nephew in Michigan. Prior to his death in 1953, a family from Illinois purchased the Coral Castle from the nephew. The family found Leedskalnin's personal effects. There were thirty-five $100 bills that represented his life's savings. Edward Leedskalnin made a modest living giving tours of the Coral Castle and selling the pamphlets he had written. Many consider the items at the Coral Castle an amazing example of engineering achievement. The items have impressed many visitors even after the death of their creator. 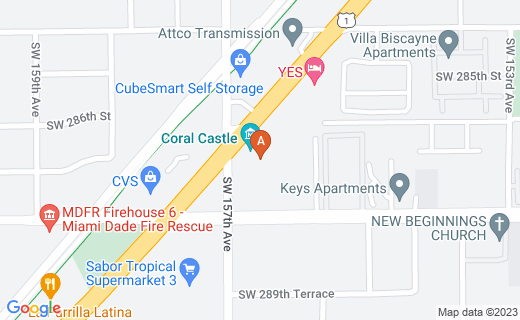