A Visit to the National Chiang Kai Shek Memorial Hall at the Liberty Square in Taipei, Taiwan

The Freedom Square also known as the Liberty Square is one of the most popular places to visit in Taipei. It is made up of three major landmarks and from the iconic gate, forms like a diamond. Once you enter the gate of the square, the National Chiang Kai Shek Memorial Hall can be found at the center, the National Concert Hall on the left and the National Theater on the right.

During my recent solo trip, I spent a whole afternoon exploring and taking in all of the splendor of the square. I was in awe of the the huge trees and beautiful well-kept flower beds. I admired the intricately designed and well-maintained exterior of the structures. And the plethora of well-preserved memorabilia and paintings inside the galleries and showrooms are amazing! If you are planning to explore the Freedom Square in the future, my touring experience might be able to give you a glimpse of what to expect.

How to go to the Liberty Square

The easiest way of going to the Liberty Square is getting on the green or red line trains, Songshan-Xindian and Tamsui-Xinyi Lines respectively, and alight from the Chiang Kai Shek Memorial Hall Station. If you will be getting on through the other train lines, there were also several intersected stations where you can transfer from one line to another. I got in at Longshan Temple Station of the blue (Bannan) line, interchanged at the Ximen Station to the green line and finally alighted at the Chiang Kai Shek Memorial Hall Station, exit 5. You may also take a cab or ride a bus that passes through No. 21, Zhongshan S Rd, Zhongzheng District, Taipei 100, Taiwan. That is the address of the square. 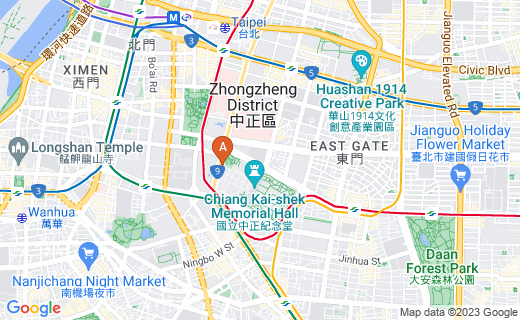 The Liberty Square is open from 9 AM – 6 PM. With the free admission, you can confidently add this to your itinerary without worrying of burning a hole in your tourist pocket. As a bonus, you may also enjoy the Changing of the Guards’ Ceremony every hour at the fourth floor of the National Chiang Kai Shek Memorial Hall, from 9 AM to 5 PM.

It was early afternoon when I alighted the train and turned to exit 5 of the station to explore the Liberty Square. It’s always a good idea to use a cap or bring your umbrella when going sightseeing. I forgot mine and the sun was way too hot so I stayed in the shade of the National Theater for almost an hour. I had the luxury of time appreciating the intricate designs of the exterior of the structures, the huge trees inside the park’s premises, the beautiful flower beds surrounding them and the potted flowers arranged in front of the theater’s front corridor. There were some locals rehearsing a dance routine at the balcony of the theater and the square was buzzling with tourists, mostly foreign, taking photos, some wearing or using their sun protection but most unmindful of the heat of the sun. After taking loads of pictures of the square, I walked directly up the stairs of the National Chiang KaRHi Shek Memorial Hall. It led me to the Bronze Hall which is technically located at the fourth floor of the building. It is where the statue of Taiwan’s iconic leader, Chiang Kai Shek, can be found. It was 3 PM and I was just right on time for the Changing of the Guards’ Ceremony which lasted for maybe about 15-20 minutes. I then proceeded down to the first floor of the hall via the elevator with some guests. I spent most of my time at the first floor getting to know the country’s history and the revolutionary leader. The Exhibition Hall of Historical Relics of Chiang Kai-Shek showed his family, the story of how he came to power, stories of wartime and conflict under his leadership, how Taiwan became what it is now, Chiang’s Presidency and the gallery of his office. It showed his well-preserved clothing, medals, photographs and other personal belongings which included two of his presidential cars. There was even an exact replica of his former office. It has the same office size with his wax image sitting on his chair, with the same copy of his reception room, hallway and views of the outside from the window. The rest of the exhibits and showrooms were filled with various types and sizes of paintings and other artworks. There were also a couple of gift shops where visitors may purchase items for gifts and remembrance of the trip. The Liberty Square is one of my favorite places in Taipei. The lovely and outstandingly preserved structures were a magnificent sight to behold and the nature surrounding it is a match in grandeur. The exhibition halls and galleries were well planned and organized especially the one to honor the former President Chiang Kai Shek. It was very detailed and effective in making sure it is able to appropriately and thoroughly depict the history of the country and the life of its well-known leader. I would love to visit again. Some say it is breathtakingly stunning at night.