It is known as the largest aircraft ever constructed. The Spruce Goose is a plane that's part of aviation history. It was only flown once. To many, it represents mankind's unending desire to conquer to skies. The creation of such an aircraft was necessary during World War II. There was a tremendous need to move troops and material over the Atlantic Ocean to help the war effort in Europe. This was a time when each month hundreds of Allied ships were being sunk by German submarines.

A master shipbuilder and steel magnate, Henry Kaiser had the idea for a huge flying transport plane. This would make it possible to transport everything necessary to Europe without the need to worry about it being destroyed by German submarines. Kaiser contacted Howard Hughes about his idea and asked Hughes if he would be interested in designing and building the aircraft. Howard Hughes was delighted to take on the challenge. Hughes knew it would not be easy especially with the restrictions by the federal government placed on materials designated as essential to the war effort. This included things important to manufacturing planes such as aluminum steel and more. Howard Hughes decided to make the aircraft entirely of wood. It was designed to be six times larger than any other type of aircraft during this time. It would have the ability to transport over 150,000 pounds of materials as well as large numbers of troops on a single trip. The aircraft was initially called “HK-1” as this symbolized the collaborative efforts between Howard Hughes and Henry Kaiser.

A contract was issued to HK-1 by the federal government in 1942 as a development contract. HK-1 agreed within the next two years it would construct three such aircraft for support of the war effort. There were many designs for the plane considered during this time. The last one, and the design chosen was by Glenn Odekirk. The aircraft would be the largest transport plane ever constructed. It would be created with mostly wood. This was done to preserve the need for metal. The rudder and elevators on the aircraft would be covered with fabric. The plane was given the name Spruce Goose by the media. Howard Hughes hated the name, but it stuck to the aircraft. The plane was powered using eight enormous propeller engines. It had a wingspan of more than 319 feet and weighed over 400,000 pounds.

The aircraft's development was taking longer than expected. Henry Kaiser believed this was due in part from their inability to obtain strategic materials due to governmental restrictions on them. He also became frustrated with Howard Hughes not being able to move forward unless things met his standard for perfection. The construction of the initial HK-1 aircraft began 16 months after the contract had been signed with the federal government. Henry Kaiser decided to withdraw from the project.

Howard Hughes decided to continue with the project. He signed a new contract with the federal government. Hughes renamed the project, H-4 Hercules. Under the terms of this new contract, Hughes only had to manufacture one aircraft based on his design. Work on the aircraft went slowly. The finished product was not available until 1946 when the war had been over for more than a year. The manufacturing of the aircraft took place at Hughes Aircraft company. It utilized a process for the wood known as the plywood-and-resin duramold. This was composite technology designed to be used with any type of wooden construction involving laminated wood. By the time the plane was ready, the federal government had spent $22 million on it. Howard Hughes had used $18 million of his own money for the H-4 Hercules project.

An unannounced test flight of the aircraft took place on November 2, 1947. Thousands of spectators arrived at Long Beach Harbor, California to witness the maiden flight of the Spruce Goose. Howard Hughes was at the controls, and his co-pilot was a man named David Grant. There were also a number of crewmen, engineers as well as journalists on board the Spruce Goose. After the aircraft made two initial taxi runs on the water four reporters departed to go and file stories. Several other members of the press remained on the plane for the final run. The aircraft picked up speed and lifted off. It was able to fly for over a mile at an altitude of approximately 70 feet traveling at a speed of 135 miles per hour. The aircraft was able to sustain the flight for a minute. Howard Hughes had proven to his skeptics that his huge airplane could fly.

The Spruce Goose never again attempted flight. Soon after its initial test flight, the aircraft was placed in a climate-controlled hanger. Howard Hughes viewed the Spruce Goose as his greatest aviation achievement. It was maintained by a full-time crew of over 299 workers. Each of them was sworn to secrecy. The workers kept the Spruce Goose in flying condition. In 1962, the number of people on the crew was decreased to 50 individuals. The aircraft's maintenance was disbanded after Howard Hughes died in 1976.

The Spruce Goose was not seen by the public for over 32 years until it was obtained by the Aero Club of Southern California in 1980. The organization decided to put the aircraft on display for the public. It was located in a huge dome that was next to the Queen Mary exhibit in Long Beach, CA. The Walt Disney company obtained the Spruce Goose, and the Queen Mary exhibits in 1988. The company told the Aero Club of Southern California, it did not want to have the Spruce Goose exhibit. The club negotiated a deal with the Evergreen Aviation & Space Museum in McMinnville, Oregon. The museum would take the Spruce Goose and make payments as well as provide a percentage of its profits for the exhibit.

The Spruce Goose was taken to its new home in Oregon by barge, truck as well as train. It was taken by barge up the Columbia and Willamette Rivers. It remained on the barge for months until the river's water level enabled the Spruce Goose to go safely under the several bridges spanning the Willamette River. Transportation of the aircraft took 138 days from Long Beach to McMinneville, a distance of over 1,050 miles. The aircraft was reassembled by Contractors Cargo Company. In 2001, the Spruce Goose was ready once again to be put on display for the public. It is now available for viewing at the Evergreen Aviation & Space Museum. 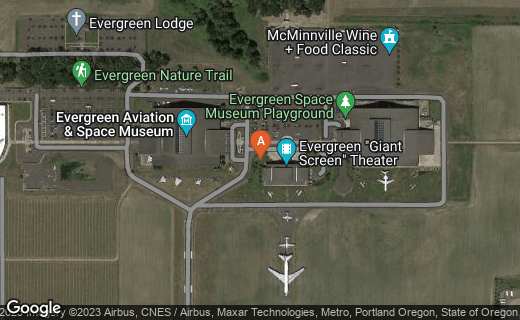