Five Breathtaking Places In Bulgaria You Have To Visit: Picturesque Mountains, Beautiful Nature And Unique Architecture

Bulgaria is a country located on the Balkan Peninsula in the Eastern part of Europe. It is part of the European Union and it is one of the most beautiful and diverse tourist destinations on the continent. There is a very wide variety to places to visit in any season ranging from beautiful nature, mountains, rivers, lakes and unique formations to a rich number of historical landmarks. On top of the outstanding places to visit there are great beaches for the summer, picturesque ski resorts for the winter and quick developing village tourism all year round.

The Beating Heart Of The Rila Mountain

The Rila Monastery is a cultural monument and a national symbol with high significance for the Bulgarian nation. It is an Orthodox Christian monastery, established in the X century by St. Ivan Rilski in the South-West part of The Republic Of Buglaria. The legend has it that the spiritual leader was living in a cave near the modern site of the monastery without any material possessions while his students were building it under his guidance.

The monastery served as one of many repositories of the Bulgarian language, culture and identity during the rule of the Ottoman Empire in the area. During the period of the Bulgarian National Revival (XVII - XIX centuries) the monastery was burnt down and then rebuilt again in it's current state. The only building that survived the fire and still dates back to the X century is the stone bell tower. The complex is considered to be one of the best examples of the typical Bulgarian architectural style of that time. It has a beautiful church in the center that is still attached to the old bell tower and conveniently provides accommodation for tourists. If you are planning to stay there which I recommend, keep in mind that couples from opposite genders cannot rent a room together unless they are married since the place is a functioning holy monastery.

The Seven Rila Lakes are a group of lakes, situated in the Rila mountain range. The lakes are up in the mountain at elevations ranging from 2100 to 2600 meters above sea level. The area is inspiring and beautiful and there are mountain treks that can be taken from the lowest to the highest lakes that are accessible to pretty much anyone during the summer when the weather is good. At that time of year the chances of storms and dangerous weather are much lower. The lakes are connected with each other by small streams, cascades and waterfalls that enrich the natural beauty of the picturesque area. Trekkers and tourists that are thinking about accommodation could stay in one of the mountain lodges that are scattered in the lower part of the area as long as they are not looking for something fancy. If not, they can at least enjoy a hot tea or a wholesome meal in their cozy canteens.

Each lake was named depending on its shape or features: The Kidney, The Lower Lake, The Eye, The Fish Lake, The Trefoil, The Tear, and The Twin. 3. The Town Of Koprivshtitsa

Koprivshtitsa is a town of huge cultural and historical significance for Bulgaria. It was one of the main cultural centers of the Bulgarian National Rivival and the starting point of the historic April Uprising against the Ottoman Empire and its rule over Bulgaria.

This small town has kept a lot from its historic architecture and there are plenty of museums where tourists can get a feel of the authentic atmosphere and cultural heritage. Koprivshtitsa has only about 2500 residents, but plenty of affordable and cultural accommodation for a relaxing time near the beautiful nature of the Balkan Mountain and away from the exhausting cycle of city life. The Belogradchik Rocks is a group of oddly shaped sandstone, limestone and conglomerate formations spread across a 50km2 area in the Balkan Mountains in the Northwest of Bulgaria, near the town of Belogradchik. Some of the rocks reach a height of 200 meter and their strange shapes have given rise to a lot of interesting folklore legends about their history and formation. The rocks are mainly yellow, orange and red and their unique structure has fascinated people from all across the world.

The Belogradchik Rocks are a major tourist destination in the area alongside The Belogradchik Fortress (which incorporates the rock formation as part of its structure), the town of Belogradchik, and the Magura Cave. If you want to visit the area, the town will provide you with the expected accommodation options. 5. The Trigrad Gorge and The Devil's Throat Cave

The Trigrad Gorge is a narrow and picturesque canyon of vertical marble rock in the Rodopi Mountain in the South of Bulgaria. The gorge was carved deep into the rock by the Trigrad river which flows directly into the rocks inside the Devil's Throat (Diavolskoto Gurlo) Cave. The east wall of the gorge reaches up to 350m above the river, while the west one reaches 300m. The distance between the two wall varies between 300 and 100m. The total length of the gorge is 7km and it was named after the nearby village of Trigrad.

The Devil's Throat Cave is a famous landmark of it's own with the biggest cascade of waterfalls on the Balkan peninsula. The cave is very dangerous because of its shape and the fact that the Trigrad river flows through it creating merciless rapids in the darkness of the cave. The total length of the Cave is 1km and 350m of it have been improved and secured in order for regular tourists to have the chance of visiting the cave safely. 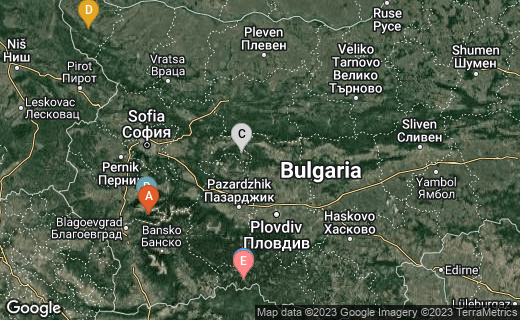