The 798 Art District, also known as the Dashanzi Art District (although in truth no one really knows it as that name) is an area to the north east of central Beijing in the Chaoyang district.

Today the area is a thriving district full of creative independent businesses and entrepreneurs. Amongst other things, there is a concentration of art galleries, cafes, bars, shops and alt-culture ventures.

Before the artists moved in in the 1990's the area had been home to manufacturing and industry since the 1950's. The area is a collection of factories, warehouses and other industrial buildings that were built by East German Communists at the request of the Chinese Leader at the time, Zhou Enlai.

Production in the factories starting to decline in the 1980's as China and Beijing began to reinvent themselves and rapidly modernise manufacturing and production resulting in large-scale, modern operations being established in other parts of the city and in other parts of China. Industrial output from Beijing was declining as industrial powerhouses sprang up all across the country. Beijing was evolving into the cosmopolitan global city that it is today.

Where is the Beijing 798 Art District 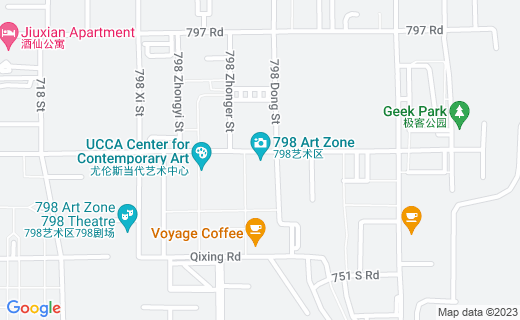 By the mid-1990's the factories were empty and the area was largely deserted. Not everyone was on board with China's rampant march towards economic growth at all costs. In 1995 a group of artists moved into one of the empty factory buildings: factory 706.

In time, other artists started to gravitate towards the area and settle in the disused industrial premises. Pretty soon several community workshops and creative spaces had been established and the artists used the big warehouse spaces to exhibit there work.

Getting to the 798 Art District

If you're staying in central Beijing ie around the Wangfujing Street area, then getting to the 798 Art Zone by public transport is rather time consuming as you will either need to take 2 buses (with the first journey taking at least 40 minutes) or use the subway but having to change lines at least twice - and even then you have either a long walk, another bus or a short taxi journey.

My advice would be to take a taxi. Tell the driver to take you to Jiuxianqiao Road. If you don't speak Mandarin write down the name of the street and the neighbourhood (Chaoyang) in Chinese characters and also the 798 Art District. It's unlikely the taxi driver will know what the 798 Art District and will unlikely know it as Dashanzi either so best to go with street name and district. If unsure, ask your hotel to write it out for you and to order your taxi.

What to do at the 798 Art District

Take a good camera with you and have a good walk around, enjoying the amazing industrial architecture and wondering in and out of galleries. Don't expect customer service attendants, queues, formal instructions or anything like that. This is a living, breathing place with people working and going about their business. You may feel like an outsider but that's actually quite nice. You can just lurk and take it all in.

There are some incredibly good artisan coffee shops there and several restaurants and cafe bars - although nothing full on. It's all very chic, cool and avant garde.

Industrial Architecture at the 798 Art Zone

I just loved walking in and out of every little lane and alleyway and seeing what was going on inside each of these delightful old buildings. Art is absolutely everywhere here and it seems that anything goes - there's no censorship or signs of a police-state here. There's some incredible sculptures knocking around and lot's of street art adorning the walls. To me, I found that the industrial nature of the place was the biggest work of art. I loved the external steel pipes and the rusted iron doors and machinery that takes you right back to what it must have been like in its 50s and 60s heyday.

I'm told that the 798 Art District is now Beijing's third most visited site after The Forbidden City and the Great Wall of China. I don't doubt it, although it wasn't particularly busy on the day I visited. I would say, though, that it probably hasn't yet reached the radars of most foreign visitors. The more adventurous visitors will no doubt seek it out but I didn't see many other foreigners during my visit.

One thing, that is clearly happening is gentrification. This is a word that, to some people, will automatically consider to be bad. To others, gentrification, can be a good thing. But the question is always who exactly does gentrification benefit?

I have seen it many times in my job working in regeneration. The scenario goes as follows: artists move in to abandoned, under-utilised spaces attracted by low rents and the aesthetic/atmosphere of the surroundings that enable them to express themselves with freedom and flexibility. Suddenly, the area becomes cool but the edgy vibe unsettles people so there are calls for better security, better public realm and better all round management. Before long the entrepreneurs are attracted as they realise they can capitalise on the desirability of the area and create a brand that identifies with the place and thus shares its 'cool' credentials. Before long, the corporates move in and pay big bucks to muscle the smaller independents out of the way.

Landlords, realising that the big boys will pay top dollar to be there, hike up the rents thereby forcing out all of the original artists and independent businesses. And the original character of the area is gone and has morphed into something else entirely.

Is the 798 Art District an Example of Gentrification?

Gentrification has clearly happened at the 798 Art District. The artisan coffee bars may be cool and independent but they're not exactly cheap. There are signs that the line is starting be crossed from 'cool indies' towards 'creeping corporates'. Audi have recently established a research and development facility there housed in a modern contemporary building and there are high end restaurants and clubs opening up. There is also talk of global hotel brands looking to open up in the area over the next couple of years.

In some ways the future is bright for the 798 Art District, but I wonder if that the journey into that future takes the district further and further away from that original character, first established in the mid-90s.

What did you think of this introduction to the Beijing 798 Art District?

Did you find this article interesting?