Halong Bay and the Number 1969

Halong Bay, situated off the Northeastern coast of Vietnam comprises an area of over 1,500 square kilometres, featuring a total of 1969 islets, the majority of which are limestone and also uninhabited. The number 1969 is easy to remember for the Vietnamese as this is the same year that their great leader, Ho Chi Minh, died. As there are far too many islets to count, I'm happy to take their word for it even if it does seem like quite the coincidence.

Where is Ha Long Bay Located 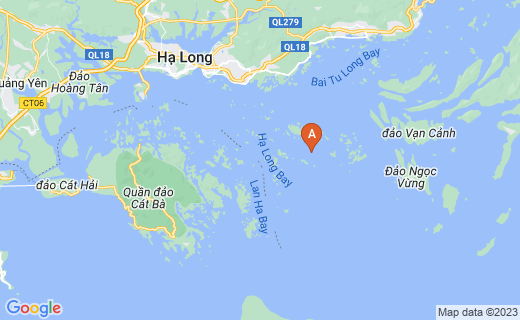 A Guide to the Halong Bay Junks

Anyone who is familiar with Ha Long Bay or who has seen images of this famous tourist destination will most likely have seen an image showing a boat cruising on an emerald sea through tall karst peaks jutting out of the water. It's that postcard image of glorious brown junk ships zig-zagging their way around the hundreds of karst peaks. Whilst the zig-zagging part is still accurate the actual image of the 'Chinese junk ship' is likely to shatter the illusion somewhat.

The Halong Bay Junks are no longer brown, even though all the publicity material still shows them as such. Indeed, a couple of years ago a Vietnamese government official, clearly trying to make a name for himself, had obviously been looking at harbours around the world and was taken with the image of white yachts. He decreed, to the huge opposition of Halong tour operators, that all boats operating in world heritage site should be painted a specific shade of white, or more specifically off-white.

The result has left a lot of tourists disappointed, not only because the boats aren't as envisaged or indeed as marketed in the brochures and online, but also because they simply don't look very good and devalue the whole Halong Bay experience in some peoples' eyes. The paint is peeling off many of the boats making them look cheap and untidy, something that I'm sure the old brown boats did a better job of hiding.

However, a visit to Ha Long Bay isn't all about the aesthetics of the boat you're on, after-all you'll be on it so you don't have to look at it. You will, however have to look at the hundreds of other boats plying the same route but we'll skip over that for now.

Sony Alpha a6000 Mirrorless Digital Camera 24.3MP SLR Camera with 3.0-Inch LCD (Black) w/16-50mm Power Zoom Lens
I travel a lot but when I look back at some of my old travel pics they don't seem to be as good as I remember. And it's because I used to use a cheap point-and-shoot camera. Nowadays I use the Sony A6000 to capture all of my travel pics. It's the best camera I've ever had. Absolutely amazing!
Buy Now

Planning a Halong Bay Cruise - How Long to Visit?

Most people who visit the Halong Bay area take a cruise on a boat which covers a number of points of interest around the UNESCO site as part of a 2 day / 1 night package. Personally I think this is the right length of time for the tour. Some people opt to stay for 2 nights but unless there is a specific activity planned such as spending one of the nights having dinner in the cave at Halong Bay, there can be too much free time with not enough to do.

As well as the wonder of the hundreds of karst peaks and small islets towering out of the water, there are some really cool places of interest that you will come across during the trip. The floating villages, where whole families live and rarely step foot on dry land, are a fascinating sight and experience.

Generally on one of the two or three days on in which you will be one the cruise there will be a kayaking activity which involves stopping off at one of the floating villages. Here you can collect kayaks then have freedom to go off exploring to your hearts content. This is really cool as there are lots of caves to cruise in and out of and you can get quite close to the floating houses.

Halong Bay and the New 7 Wonders of Nature

In 2011 an international competition was held to find the 'New 7 Wonders of Nature'. Apparently millions of votes were cast and Halong Bay made it into the final as one of 28 finalists in the new 7 wonders of nature category. I've been to some of the sights that are included in the 28 finalists of the new 7 wonders of nature including Angel Falls, Iguazu Falls, Ayers Rock (Uluru) and the Grand Canyon (to name but a few). Don't get me wrong, it's a truly incredible place, like nothing I've seen before (although I've since seen plenty of similar places) but the sheer number of boats and tour companies operating in this space lessens it's impact in my eyes. However, Halong Bay did in fact make it into the list of the 7 new wonders.

Although I did go swimming in the water and really enjoyed it, I couldn't help but notice as we cruised along that there is a lot of pollution in the water that has surely been caused by the boats. I'm talking about oil floating on the surface, glass and plastic bottles floating on the surface and other piles of trash and litter floating about. To appreciate the beauty you have to ignore this, but I think for a genuine top 7 wonder there wouldn't be such a grim downside.

Food is generally included in the price of your tour ticket and includes breakfast, lunch and dinner. It's generally a case of the waiters bringing out several plates of food and you have to share it out between you. On our boat they brought out loads of food for each meal so we were never hungry. They provide soft drinks but alcoholic drinks need to be paid for and they can cost up to 4 times as much as they do on the mainland. It seems unfair at first but then you remember that even at the 4 times as much price they are still less than a quarter of what you'd pay back home.

Generally, the weather in Halong Bay is fine all year round. Here, the weather doesn't change too much throughout the year but if there was a best time to go then it would be during the months of September and October and March and April. These are the quiet, calm periods of the weather cycle in this part of Vietnam.

The weather in Halong Bay can be very hot, humid and wet during the summer months (Jun-Aug) making a trip at this time of year rather uncomfortable. In the winter months (Dec/Jan), although the weather is generally fine, there is an increased chance that the weather could turn cold and strong winds are more common. This rarely effects the running of the cruises and tours but it can make your trip less than pleasant.

I hope you have enjoyed reading this practical guide to planning a Halong Bay cruise. If you have any feedback please feel free to leave a comment below. If you are interested in reading further travel guides to other popular destinations in Vietnam please click on one of the links below. Happy travels!