The City of Jerusalem

About 50 miles north of Birmingham is the town of Cullman, in the State of Alabama, there is an exquisitely landscaped park and garden, hewn out of the walls of an old rock quarry which is on the grounds of St. Bernard Abbey, is the city of Jerusalem.

A miniature of the Holy City, crafted from stone, glass, marble, and concrete and other materials, sent from all around the world, by all different people from all walks of life, who had heard of the little city of Jerusalem in the USA.

My Aunt Irene Bartlett was the Cullman County, Alabama nurse and all the nieces and nephews loved to visit Aunt Rene and Uncle Jose. Every summer they would have two or three of us visiting for weeks at a time.

Aunt Irene (Aunt Rene the kids all called her) use to take us to places in and around the area where she lived in Cullman. She would take us to Teen Town, a store front room with a juke box, where teens could go to dance, talk with other teens or just hang out.

Brother Joseph Zoetti, was born in 1878 in the Bavarian town of Landshut.

In 1892 Brother Joseph Zoetti immigrated to the United States and at the age of 14 became one of the first students of Saint Bernard Abbey, in Cullman, Alabama and decided sometime later to become a Benedictine Monk.

Having been assigned Kitchen duty in Saint Bernard Abbey until 1910 when Brother Joseph Zoetti developed his hobby of building miniature shrines. And he built miniature Grottoes of the store that sold in the gift shop of Saint Bernard. The monies from the sale of the miniture shrines funded the construction of the Ave Maria Grotto.

As the number of tourist and visitors increased the recreational grounds had become so overcrowded by people wanting to view the miniature replicas that had been erected around the monastery grounds, it was decided to move the ‘sermons in stone’ and the 125 miniature village replicas to the abandoned rock quarry of the bluff of Eight Mile Creek, and May 17, 1934 the Ave Maria Grotto was dedicated.

Brother Joseph was a hunchback as a result of an accident, but did not hinder his ability to bend over and build the miniatures.

Before Brother Joseph had decided on the type of building materials he would use to continue building his miniature villages, on April 29th 1933 a partial solution presented itself when an L&N railroad was derailed near Vinemont, Alabama, which was about twenty miles away from Vinemont, Alabama. One freight car was full of marble that came from Sylacauga, Alabama’s Gantt Quarry. When the train was derailed the freight car with the marble turned over and the marble was so crushed, the owner no longer had any use for it and he gave it to Saint Bernard Abbey.

The pieces of marble carted down to Saint Bernard by the monks, was exactly what Brother Joseph needed as the main stalactites to hang in the Great Grotto.

Other materials such as broken bathroom tile, colored glass, costume jewelry shells, rocks, chandelier prisms and beads, were donated by people from all over the United States and many foreign countries who had seen and admired to beauty of Brother Joseph’s previous works. With materials sent from all over the world. Brother Joseph continued his work for more than 40 years. One of Brother Joseph's last works included glass pieces set in cement, an American flag, and a replica of the World's Peach Church in Hiroshima, Japan, and at the age of 80 in 1958, Brother Joseph built a replica of the Basilica in Lourdes, which was his last masterpiece. 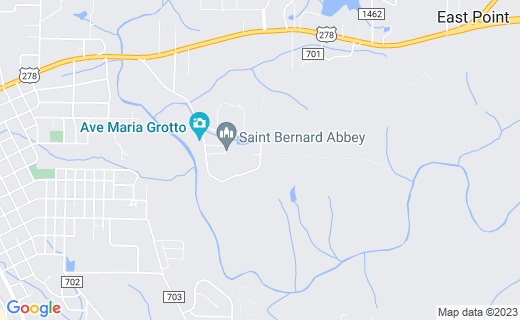 The first and only Abbey in the State of Alabama

The first and only Benedictine Abbey in the state of Alabama is home to the Ave Maria Grotto with the replicas of not only the Holy City but also 125 miniatures of famous churches, shrines building and Old World reproductions, in an area of over three acres. The Ave Maria Grotto is a miniature fairyland that has visitors from all over the world. And, continues to amaze students of architecture to this day

The original Little Jerusalem buildings are the first group of miniatures that Brother Joseph made. Many have been reproduced in other parts of the Grotto.

Some of the other miniatures honor The Nativity of Our Lord, the Red Cross Tower, a shrine in honor of Pope Pius XII, the Alamo, St. Theresa, the Little Flower, St. Peter's Rome, the Temple of Jerusalem, The Tower of Babel, Noah's Ark, the Hanging Gardens of Babylon, Lourdes Basilica, Our Lady of Fatima Group, and Southwest Missions.

More detailed information can be found in the book titled Miniature Miracle by John Morris sold in the Grotto gift shop.

Brother Joseph completed over 60 years of monastic life in St. Bernard Abbey. He died peacefully in his sleep on Sunday, October 15, 1961. He is buried in the Abbey Cemetery with a simple cross bearing his name

You need to allow 2 to 3 hours to really enjoy this unique and tranquil attraction.

My visits to the Ava Maria Grotto/Little Jerusalem made such an impression on me when I was a child. I felt like I was walking in the Holy City itself.

All the information and the pictures I kept from years ago when visiting my Aunt Rene and she took us to see this beautiful creation.

I wish that everyone could see the architecture and attention to detail of the replicas of religious buildings from all over the world and especially Jerusalem.

Known throughout the world as "Jerusalem in Miniature,"

Source: Brochures from my many visits to this beautiful serene garden.

Open daily from 9am to 5pm

I just discovered another article about this Grotto