What is it with Uruguay's fascinating lagoons? In southern and south-eastern Uruguay a number of striking lagoons are scattered across the landscape.

One of these lagoons — and considerably larger than Laguna del Sauce's 70 square kilometres — is Laguna Merín. In the case of Laguna Merín, the shores of the body of water are divided between Uruguay and Brazil; thus officially the line of demarcation between Spanish- and Portuguese-speaking areas passes through the lagoon.

Bear in mind that water defines Uruguay in a special way. The very name of the country refers to the Uruguay River, a major tributary of the River Plate, seen by Spanish navigator Juan Solis in the 16th century. Referring to the Uruguayan and Argentinian nations, former President of Uruguay José Mujica has spoken of 'the river that unites us'. The national poet Juan Zorilla de San Martín wrote , in his epic poem Tabaré, of 'el Uruguay querido' (beloved Uruguay): ostensibly about the country, but actually in context about the primary topographical referent, the Uruguay River.

This particular body of inland water in the Maldonado department at Laguna del Sauce is indeed special. It is often very calm — calmer than the River Plate estuary from which it is separated — it is also ideal for windsurfing. While the willow - 'sauce' - gives the Lagoon its name, pine and eucalyptus are common in the vicinity. Both to preserve flora and fauna and to contribute to the tranquil character of the adjacent environment, local bylaws restrict the operation of motor vessels on the Lagoon. A calm equilibrium in various ways informs this striking body of water.

I grew up in Uruguay. To landscapes — and waters — and the people who inhabit these landscapes can be attributed undulations and resonances which are varied, and sometimes complex and hidden. But the collective memory of these often labyrinthine interactions are what gives a country its character, the elusive mystery of the national landscape, its uniqueness.

Ideal visions of peace and equilibrium have their subjective element. But in physical terms the relative and comparative peace and equilibrium of a lagoon such as Laguna del Sauce are undoubtedly rooted in reality, as is the contrast with the chain of hills which breaks the horizon beyond the Lagoon.

These hills belong to the Sierra de Carapé, which in turn belongs to the range known as the Cuchilla Grande. The Uruguayan Cuchillas do not attain the height of mountains — the highest peak of the country is Cerro Catedral, at 514 metres — but rolling hill country is typical of the interior of Uruguay.

The Cuchillas are also replete with strong historical associations with past conflicts on the national territory involving both indigenous peoples and Independence-era struggles, and armed encounters during Uruguay's intermittent civil war which lasted through much of the 19th century until 1904. The Uruguayan writer Javier de Viana (1868-1926) wrote his story En las cuchillas against the background of civil war conflicts in Uruguay's hill country between gauchos loyal respectively to Colorados and Blancos. Compatriot Eduardo Acevedo Díaz wrote along similar lines, except that the hill country conflicts which also inspired some of his writings date back to the Independence era.

Thus Uruguay, like many Latin American countries, has a strong revolutionary tradition, some of which is evoked by the history and memory of events in the Cuchillas of its interior. Even today, interpretations of that revolutionary tradition and of events in the Independence era and the complex, intermittent civil war are the subject of evocation and debate among many Uruguayans.

Laguna del Sauce is also the name given to the airport which serves the Uruguayan resort of Punta del Este. I have supplied a photo of an Uruguayan military aircraft parked at this airport, with the Lagoon clearly visible in the background. Uruguay's military has long played a strong role in the life of the nation, from times which predate the period of civilian-military rule 1973-1985. As well as airliners bringing tourist traffic from neighbouring countries, at Laguna del Sauce, it would not be unusual also to see aircraft belonging to the United Nations: Uruguay, like Canada, has had a strong Peacekeeping tradition; interestingly, this partly derives from the fact that from the days of civilian military rule it has had a large military budget.

At nearby Punta del Este, Uruguay twice hosted in the early 1960s seminal conferences of the Organization of American States. The vision of liberation movements interpreted by Marxist ideology was represented at Punta del Este by Che Guevara, who served as Cuba's Minister of Industry. On the other hand the vision of President John F. Kennedy's Alliance for Progress was articulated at Punta del Este by Arturo Morales Carrión, Arthur M. Schlesinger, Jr. and others. While even today, many on the Left in Uruguay tend to look to the Cuban Revolution to give interpretation to Uruguay's own national revolutionary tradition, many Uruguayans are also strongly amenable ideologically to progressive, non-Marxist notions of personal and economic freedom.

In some ways it is as if the at times bewildering and recurring conflicts associated with Uruguay's undulating Cuchillas are still pressing their relevance to contemporary discussions. But it is also the case that some of the leaders of Uruguay's own revolutionary tradition looked to events and personalities of the American Revolution as fellow travellers — even brothers-in-arms. Indeed, the writings of Uruguay's acknowledged Independence-era leader General José Gervasio Artigas (1764-1850) were strongly influenced by United States' legal texts.

The Cuchillas and the Laguna del Sauce: the territorial energies and popular memories are all there. But surely there is no inevitability about the recurrence of revolutionary violence and intermittent manifestations of a frozen civil war? Surely it is rather a question of how these latent, subterranean energies are harnessed? JFK accorded Latin America huge importance (1), and this last question is maybe a way of posing the challenge of the Alliance for Progress. Perhaps Aaron Shikler's brilliant portrayal of JFK, seemingly carrying the weight - and ideological conflicts - of the world upon his shoulders, depicts the moment of some unrecorded and unrequited musings about the poignant challenge posed to the human spirit by a vivid and restless Latin American Continent steeped in multifarious revolutionary traditions?

(1) 'I regard Latin America as the most critical area in the world', President John F. Kennedy, 1963, qu. in: 'Battle for the Hemisphere', Arthur M. Schlesinger, Jr., A Thousand Days: John F. Kennedy in the White House, Mayflower-Dell, 1967, p. 590. In this JFK birth centenary year, these words perhaps carry particular weight.

Punta Ballena, close to Laguna del Sauce, which is regarded as Uruguay's leading whale watching spot, has the Casapueblo museum. The nearby Arboretum Lussich has a mature wealth of tree species, plus a museum.

A few km. from Laguna del Sauce is the historic city of Maldonado and the well-known resort of Punta del Este ; and the city of Piriápolis, a resort with some remarkable architectural heritage overlooked by the prominent hill known as Pan de Azúcar.

How to get there: Mainly seasonal flights from Buenos Aires also operate to Laguna del Sauce International Airport, where car rental is available, from where principally serving the nearby Uruguayan resort of Punta del Este . Latam flies to Montevideo Carrasco International airport, Uruguay from North American destinations including New York and Toronto. For up to date information, please check with the airline or your travel agent.

This work may be of interest 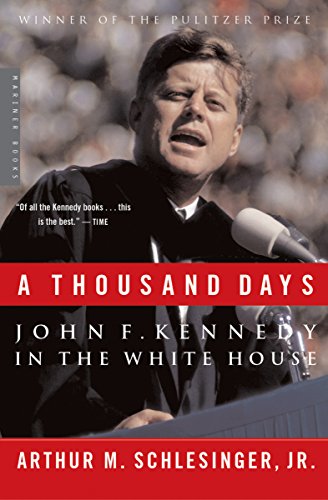 A Thousand Days: John F. Kennedy in the White House
Re-read this book every few years! Public issues raised by the JFK Administration remain perennially significant. The narration of Arthur M. Schlesinger, Jr. is supremely readable and engaging. As someone who grew up in Uruguay, I can especially appreciate the special attention which the book gives to Latin American issues. Yes, JFK's legacy is in part strongly rhetorical, but the way JFK rode the wave of revolutionary heritage provided for a Hemispheric policy which denied Castroist/Marxist influences a monopoly. While a close reading of Schlesinger's book reveals certain hesitancies over just how realistic were some of the Alliance for Progress's social aims, yet it will be clear to Uruguayan readers that not since FDR — and possibly George Washington — has an American President succeeded in harnessing goodwill and aspirations dating from the Independence era among the nations of the Hemisphere.
Buy Now