Why Visit the River Walk in San Antonio, Texas?

Consult any travel guide or article and one of the top destinations to visit in San Antonio, Texas is the River Walk.

Why is this true?

The River Walk is more than just a tourist destination. And, its more than just a segment of downtown San Antonio at which you can find delicious restaurants, hotels and shopping. When you visit this destination, you can stroll along the river in a pedestrian-only environment and browse tourist stores, enjoy a Happy Hour beverage and some of the best people-watching in the state of Texas.

The River Walk is situated one level below street grade and is only accessible by foot traffic. You can also tour the heart of the San Antonio River Walk via one of several boat tours. The river is criss-crossed by a number of charming stone bridges connecting one side to the other. The River Walk can be reached by stairs at one of numerous locations throughout the City. It is also wheelchair accessible via elevators. Many hotels are located on the River Walk, or very nearby.

The San Antonio River originates just outside the City and flows southeast for 240 miles, far beyond its short approximately 5 miles in the downtown area. Visit the missions just outside the City limits and you can see the future of the San Antonio River Walk underway. Paved pathways for bicycling, running and walking will be installed for recreation and sightseeing along the river.

Where is the San Antonio River Walk? 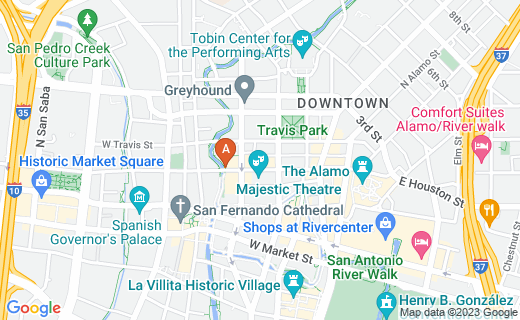 How to Visit the San Antonio River Walk

There are no official "hours" of the San Antonio River Walk because it is essentially a pedestrian walkway one level below the street. However, the walk is most enjoyable during regular business hours when restaurants and stores are open.

Most restaurants are open 11 a.m. through 11 p.m. (midnight on Friday and Saturday night). Beat the crowds and visit early, before 9 a.m.

I suggest touring the River Walk both on foot and by guided boat tour, if possible. Boat tours are available from 9 a.m. to 9 p.m. daily. Prices per person vary, as set forth below and you may obtain a discount by purchasing a tour trolley/bus pass. Call the reservations office at 1-800-417-4139 or local (210)-244-5700.

Wearing comfortable shoes are helpful, especially if you will be climbing up and down stairs from street level at one of many access points. Leashed dogs are welcome on the San Antonio River Walk, too. Just make sure that any restaurant you may wish to visit allows dogs.

Of course, don't forget your camera!

Getting to the San Antonio River Walk is easy for people visiting downtown San Antonio. It is less than 1/4 mile away from The Alamo and generally within walking distance from most major hotels in the heart of the City. If you are visiting from out of town in an RV or bus, arrange for parking in advance at The Alamodome (call 210-207-7755) or at Travis Park parking meters.

The San Antonio Disability Office has ADA maps of the River Walk that you can obtain by calling 210-207-7957 or by visiting http://www.sanantonio.gov/ada/. When my Mom and I visited San Antonio in August 2013, we enjoyed two dinners along the River Walk, one of which was suggested by relatives who live north of Austin, Texas.

We dined at Boudro's on the River on a Sunday evening. This fantastic Mexican cuisine restaurant is moderately priced ($20-30 for an entreé) with delicious cocktails and homemade guacamole prepared tableside. Make reservations in advance, especially during high tourist seasons and on the weekend.

Also recommended is Casa Rio, which we enjoyed on a Tuesday evening. The food is slightly less expensive than Boudro's, and a little less impressive in presentation and quality. Still, its a fun place to dine, and you can watch the river boats go by. We waved to our boat tour captain about 30 minutes after disembarking!

Other notable restaurants along the River Walk include the Hard Rock Café San Antonio. Nearby, you can find Ruth's Chris Steak House as well. Perhaps the most notable feature about dining on the San Antonio River Walk is the large number of local, non-chain restaurants. If you have more than a few days, ask the concierge for other recommendations.

As may be expected, restaurant offerings are often Mexican or American cuisine.

Have You Visited San Antonio, Texas?

Expect an average monthly rainfall of 2" per month.

Humidity is relatively high, which can make daily temperatures feel warmer. When we visited the end of August, we found the evenings to be very pleasant, but were grateful for air conditioned attractions during the day.

Expansion plans are planned for areas of the river north and south of Downtown. As chain restaurants and establishments have begun to flourish, now taking up about a third of commercial space, talk has begun at City Hall about limiting their existence on the River Walk and keeping a distinctively local flair.

On May 30, 2009 the city opened the $72 million Museum Reach. Two years later, in May 2011, the River Walk was extended by several miles to extend from Downtown to Mission Espada, on the city's south side. This addition (named the "Mission Reach") is notable for its emphasis on ecological controls and improvements, as well as trail improvements to support both hiking and biking.

After years of hearing from locals and tourists about the water's quality, talk has also begun about cleaning up the water, although the muddy bottom and silt deposits make this difficult. The muddy bottom does receive an annual cleaning during the Mud Festival.