A really picturesque town in Zeeland Flanders, The Netherlands

Sluis is different. It is a most picturesque, small town on a canal, with interesting architecture to boot. But it is remote. Only a short drive from the Belgian city of Bruges, it is situated in a location from where a long and somewhat difficult drive used to be necessary to the big cities of The Netherlands — Amsterdam, The Hague, Rotterdam and Utrecht: sometimes collectively referred to as the Randstad.

This is because, uniquely in The Netherlands, Sluis forms part of Flanders (Dutch: Vlaanderen ). Wait a minute, someone might object, I thought Flanders was in Belgium? The answer: yes it is, but the historic area covered by the term Flanders is more extensive both northwards and southwards than the state contained in today's Kingdom of Belgium. In fact, Sluis is situated in what is known as Zeeland Flanders (Dutch: Zeeuws Vlaanderen ): essentially the area south of the western Scheldt River, north of the Belgian-Dutch border.

The reason for the inclusion in The Netherlands of the southern shore of the western Scheldt river goes back centuries to the days of Dutch naval power and the conflict between the northern Protestant leaders and the Spanish rulers of the Southern Netherlands, now Belgium. Basically, by holding on to a shoreline which properly formed part of Flanders, the nothern Provinces could maintain supremacy over the shipping lanes of the Scheldt, the main port of which is Antwerp, significantly, in the south.

With the opening of the Western Scheldt Tunnel (Dutch: Westerscheldentunnel) road communications have been made much easier with the rest of The Netherlands with which Zeeland Flanders is not geographically contiguous. The tunnel, which goes under the Scheldt near Terneuzen; previously a car ferry — which was subsequently limited to foot passengers — served the route Breskens - Vlissingen.

Some history and features of Sluis

The town hall at Sluis has an attractive 14th century belfry, in a style more common in other parts of Flanders, which still serves as a local landmark.

On 24 June, 1340 an English fleet fought French and Genoese ships at what is known as the Battle of Sluys (NB, the former spelling tends to be used in English historical accounts).

Eede (distance: 11 kilometres) is a small town where on 13 March 1945 Dutch Queen Wilhelmina returned to The Netherlands after her WW2 exile. A monument in Eede commemorates this event.

Sint Anna ter Muiden (distance: 1 kilometre) is small, picturesque village which has the distinction of being the westernmost locality of the continental Netherlands (technically, it may be remembered some of the islands of the Netherlands Antilles have been incorporated as integral parts of the country). I was particularly struck by this little village right on the border with Belgium.

Aardenburg (distance: 9 kilometres) has an impressive old church (Sint-Baafskerk) with a very high tower. A gate known as the Kaaipoort is a local landmark. Formerly known as Rodenburgh, the town of Aardenburg is reckoned to be the oldest in the Dutch province of Zeeland.

How to get there: Brussels National Airport (Brussel -Nationaal -Luchthaven) , Belgium, where car hire is available, is the nearest large international airport to Sluis (distance: 124 km). Brussels Airlines flies from New York (JFK) to Brussels National. By road from Brussels, take E19/A1 and E34 to exit near Aardenburg, by the Belgian-Dutch border, close to Sluis. Please check with the airline or your travel agent for up to date information. Please refer to appropriate consular sources for any special border crossing arrangements which may apply to citizens of certain nationalities. 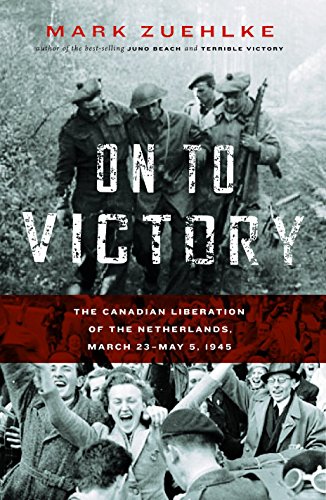 On to Victory: The Canadian Liberation of the Netherlands, March 23May 5, 1945 (Canadian Battle)
Buy Now