What is Wadi Rum

Wadi Rum, located in southern Jordan, is a protected desert area that was made a UNESCO World Heritage Site in 2005. It is a desert expanse made famous for its Mars-like red sand and has featured as a backdrop to the red planet in several Hollywood movies including, most recently, The Martian, starring Matt Damon.

In addition to the physical landscape, one of the most interesting aspects of a visit to Wadi Rum is the opportunity to interact with local Bedouin and to develop an appreciation and understanding of their way of life and why the desert holds such as special place for them.

Before Wadi Rum made it onto the UNESCO List, it already had protected area status going back to 1998. This protected area covers some 74,000km and runs almost all the way down to the border with Saudi Arabia. To access the protected area you need to obtain a permit which can be paid at the visitor centre at the gates to the village.

Getting to Wadi Rum 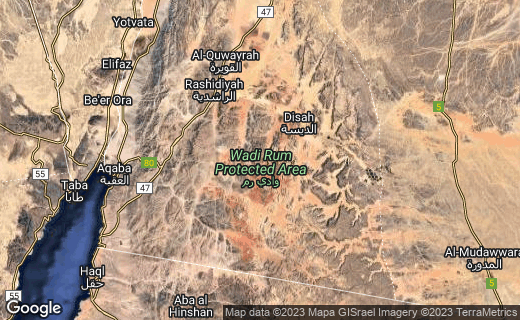 Many people will visit Wadi Rum as part of a coach tour which will include many different sites in Jordan over the course of a single day. My Dad had done this a few years before I visited and he thought he'd seen all there was to see in this area and told me he was disappointed in it.

I later learned that the coach trips don't actually make it any further than the visitor centre - or if they do it's only to a small area to the rear of the centre where they can ride a camel.

No, to get into Wadi Rum proper i.e. to get into the desert, you need to get yourself a guide. Most of the desert camps inside the protected area can provide you with a Bedouin guide who will meet you when you arrive and then take you to the camp at the end of the day.

We arranged a guide from a company separate to our accommodation as, whilst we had specific reasons for choosing the accommodation (more on that later) feedback on their guides was pretty weak.

So we did our research and found a company called Rum Stars who offer both a basic Bedouin camp in the desert and also local guides. Communication with them by email was excellent and they provided me with instructions on what to do when I arrived at the Wadi Rum village.

On arrival I phoned the number (I had purchased a local SIM card whilst in Jordan) that had been provided to me and was met by our guide, Salaam. Salaam was a very laid back Bedouin dude who looked exactly as you'd imagine a Bedouin to look.

We hopped aboard Salaam's SUV and he explained to us our itinerary for the day which he promised would end with a beautiful sunset over the desert. After entering the desert we quickly realised why you need a guide for this trip. There are naturally no roads and to an outsider there are no clear landmarks to guide your way. Salaam told me that he could navigate his way around the desert even in the pitch dark of the middle of the night. This was his playground where he had spent his childhood years.

He had climbed every cliff, abseiled down every canyon, explored every cavern and made tea in every shaded spot.

Our guide was a friendly guy who was interested in us in a genuine way that you don't normally get with a tour guide. We had very interesting discussions about the state of the Middle East and the impact the wars in Syria and Iraq have had on tourism in Jordan. I was keen to understand what the Bedouin people made of the situation, especially the situation in Syria which lay just beyond Jordan's northern border. Salaam had such a considered, philosophical view of life that I immediately took a liking to him and felt very comfortable talking to him about such important issues.

Once we'd built a rapport I was keen to ask him about what it is about the desert that he likes so much; what impact technology has had on Bedouin life; and whether younger Bedouin are being lured away to the city.

The answers were as I suspected. Salaam didn't try to play me like a fool - instead he just told me it like it was. Yes, technology (internet, TV, Mobile phones, movies) are having a big impact on the Bedouin way of life. Young people now have access to a world that they didn't previously know existed and they want a piece of it. More and more Bedouin are coming out of the desert and are moving into towns. The Wadi Rum village started off as a very small settlement in the 1970's but has rapidly grew as more people come out of the desert to try to earn money from tourism.

Life in the Desert

With regards to my question about why he loves the desert so much, Salaam gave me a simple answer: the silence. He told me that although he no longer lives in the desert, he will from time to time leave his home and go and live in the desert for several months at a time. He says there is a calm out there that does not exist anywhere else.

I'd have to say I believe it. There were moments in the desert, especially when we stopped in a canyon and Salaam made tea over a fire, when I could not hear a sound. No aeroplanes above, no cars or trucks in the distance, no electricity - not even the sounds of any birds. Just absolute silence. It was incredible and I started to understand what the Bedouin were about.

Tea with the Bedouins

After watching an incredible sunset over Wadi Rum desert and, feeling serene after spending a fantastic day with Salaam, he dropped us off back at my car. I called our accommodation for the night to let them know that we were ready to be picked up. When our driver came to collect us it was very dark. We drove into the desert and it was now more clear than ever that only the Bedouin knew how to get around. Even with the headlights on there was nothing to see and no sign of anything in any direction. But he obviously knew exactly where he was going and in 20 minutes we had arrived at the Wadi Rum Night Luxury Camp.

After spending the day with Salaam and passing up on the opportunity to stay at his authentic, basic Bedouin camp we felt a bit like frauds checking into a 'luxury' camp. And, honestly, we're not luxury people; we've travelled all over the world and we're more than happy to bed down anywhere.

But, when planning our Wadi Rum trip we had come across this camp that offered the chance to stay in a bubble tent with a clear ceiling where you could sleep in a 4-poster bed staring up at the night sky. It was simply too good an experience to pass up.

The 'Full of Stars' Bubble Tents

Spending a night in the Bubble Tent (the correct name being the 'Full of Stars' Tent) was an incredible experience. The night sky in the desert was so clear we saw literally billions of stars. I took loads of photos on my Sony A6000 camera and also recorded a couple of videos on my phone.

When we woke up in the morning and looked out at the dawn light you could really imagine that you were actually on Mars. The view was simply spectacular. Like no other accommodation I have ever stayed in.

After breakfast it was time to leave the Bubble Tent and to leave Wadi Rum behind. But I have the photos and I have the memories and Wadi Rum will always be a very special place for us.

Tourism in the Middle East

Does the conflict in the Middle East put you off travel to the region?

I hope you enjoyed reading this article and that you found it interesting. Please take a moment to leave a question in the space provided at the bottom of this page. IF you would like to read further travel guides that I have written about Jordan please click on the links below.