The Beautiful Island of Ireland

Planning a trip to Ireland? Most would be expecting a horse drawn kart to be carrying them through the streets of an antiquated Dublin. But before you start planning your trip, you need to be well aware that the days of old have long passed. Instead, Ireland has become a mixture of antiquity and modern architecture. It is a land with unique culture and an enormous amount to see and do which makes it in many respects, a land of unmatched fun.

After landing in the new airport terminal, T2 in Dublin, you will most likely rent a car and go explore. And you really are in for a treat.

Cliffs, Prehistoric Wonders, Art and Culture, Friendly laughs and the best pubs and clubs you could ever want, Unique sports, new beers and old faces. The best bag of chips (french fries) you will ever have, and maybe the worst hang over. It all awaits.

So much historical charm in the morning, matched only by the great life within the modern and comfortable cities at night. My top choice of cities would be Dublin, Cork, Galway and Kilkenny. For smaller towns there are far too many to choose from. Read on, to gain some knowledge of avoiding the greatest tourist pitfalls you can experience. Firstly, don’t do the touristy thing….. The path too often taken is not the best one.

Here Are Some Of The Best Hidden Gems From Around Ireland:

1. Newgrange, Dowth and Nowth in the Boyne Valley. These beautiful prehistoric monuments are all too often overlooked, and not many even know they exist. They are what many regard to be, ‘what Stonehenge wants to be’. They far pre date Stonehenge and even the pyramids of Giza. Dating as far back as 3200 BC, these Celtic monuments are as wondrous as one could want. This article has a more in depth view of the ancient temples of Ireland:

2. The Cliffs of Moher in one word… Majestic

And some of the better known attractions:

7. Croke Park…82300 seater stadium, to watch the local Gaelic games, Hurling and Football, or maybe to attend one of dozens of great concerts on offer throughout the year in the capital. Lady Gaga, U2, the Chili peppers and Adele recently played in Dublin

8. Drive around county Kerry…. Bring a small car…. And enjoy the sights

9. The Burren, with its unique flora and fauna. Some flowers and plants here, exist in no other place in the world.

10. Blarney Castle and the Blarney Stone. Kiss the blarney stone and get the gift of the gab.... or so the story goes. The truth behind this castle and the word 'blarney', comes from the ancient propaganda of the Irish Lord of Blarney, toward Queen Elizabeth of England. The Queen claimed the land to be hers during the long war between the two countries. Blarney refused to swear loyalty to her, instead holding up in the castle under siege.

13. Fore Abbey, Co.Westmeath - The mysterious wonders of Fore. This ancient village is an untouched delight and surely worth visiting if you are in the area.

14. WE WANT TO HEAR FROM YOU. WRITE A COMMENT OF YOUR FAVORITE PLACE TO VISIT IN IRELAND AND I WILL ADD IT TO THE LIST =) 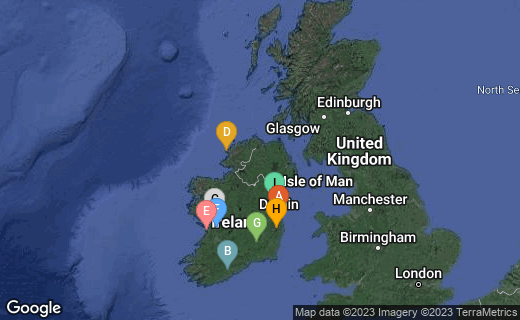 1. The back roads. Try to only use the back roads when you are heading out to an ancient monument, relic or tomb in the country side. Some of these old roads are relics in themselves. These roads are rarely used and some are more like walking trails. The main roads are top class. Stick to them.

2. Drinking and driving is strictly forbidden. Don't be surprised if you end up in a cell for the night.Its Zero tolerance. Even a tiny bit, and you're done. Ask a local for a taxi/ hackney number, and grab a 'seven seater' back to hotel or B&B when you have had a few too many.

3. Rent a small economical car. Petrol (gas) is expensive, and when visiting those old monuments, on the roads that no one ever uses, it is a lot easier in a small car than a big old gas guzzler.

4. Speed limit. The limit, unfortunately means the limit in Ireland. Go over the limit and face a Garda (police) car or motor cycle on your heels.

Lingo and the Locals

1. Irish people are just like everyone else, except for one thing. A lot of people like to make fun of you. A lot! I grew up there so I know. They call it 'Takin the mickey out of ya', 'having the craic', or 'just jokin around'. So be prepared to have a lot of fun, and keep a light heart.

2. Different areas have different accents. And you may understand people in one city easily but the others may be a mystery to you. Just remember that people are friendly, and wont be offended if you can't understand them.

3. Irish people are good fun in general. But try to cut down on the leprechaun silly talk. Its annoying. People will laugh the first time. But believe me, it gets really old really fast. St. Patrick's day may be the only time you see fully grown men dressed as Leprechauns. That can be quite the sight. So if you are into the cheesy Irish image rather than the historical or geographic appeal, the St.Paddy's day festival may be more suitable for you.

4. There isn't a whole lot of pitfalls. Dublin is a safer major city than most. As is Cork which was the European capital of culture in 2005. Common sense is all you need.

Do you plan on ever visiting Ireland?

Grabbing a flight into Ireland can be for as little as E500/ $650 per person from the USA, and as little as 50 quid from the UK or Europe. And a note for back packers, the price to Europe works the same, from Dublin, Shannon or Cork to any of these countries. Ireland is great for families, romantic getaways, stag nights, tours, acacking or even for a nice quiet hideaway that we all need now and then.

Please feel free to comment with questions and/or stories. I may even edit the article with any great suggestions. Check out the helpful links below, enjoy your trip and have fun!