A little bit about Horatio Nelson

Born on 29 September 1758, Horatio was born in Burnham Thorpe in Norfolk to a religious family. His father was the local vicar. It was at the tender age of 13 he became a Midshipman on Raisonnable. It was from here he got a love for the sea, and his career was set out before him. Throughout his career he rose the ranks in the Royal Navy, eventually becoming Lord Horatio Nelson. His final battle was in 1805 at the Battle of Trafalgar and was killed in action. But throughout his career, he also battled with personal problems. He married Frances Nisbet in 1787. And in September 1798 he arrived in Naples, Italy. In the same year, the Neopolitan Royal Family are under attack from the French, where Nelson rescue them and the Hamilton family. This is when he begins an affair with Emma Hamilton, despite both of them being married. You can imagine the scandal this would have caused at the time! In February 1801 Horatio and Emma have a baby daughter, whom they called Horatia. Horatio died in 1805 in the Battle of Trafalgar and is buried in St Paul's Cathedral, London. Ironically, he also suffered from sea sickness!

England expects that every man will do his duty.

The Nelson Museum is the only museum in the United Kingdom dedicated to Lord Horatio Nelson. It tells you all about his life from his childhood, his turbulent love life and his naval career. The museum is conveniently situated close to the river in the heart of Great Yarmouth, a bustling seaside town in the county of Norfolk. As you access the museum, there are friendly staff available to guide you around the museum and provide information.

At the beginning, there is the centre display which is shaped like a ship. Here you will find lots of information about Nelson's career with pictures. There are also display cabinets around the outside of the room with lots of things in them that are related to Nelson, the time he came from in the 1800's or to do with Norfolk. All of the things on display comes with information. There is also interactive things for the kids, like knot tying. One of the children's favourite things is the courtyard at the back of the museum where they can play. This is also suitable for people to sit and have a picnic.

As you go 'below decks' at the back of the museum, you get to see what it was like for the crew who worked below decks on the ship. You can press a biscuit on the wall to get sound effects of what it was like when the cannons were being fired and the men at work. This is very effective as you get an idea of what it was like for the crew to live like this all the time. There is also a courtyard where there are games and activities for the children and families. Upstairs there is an exhibition which, currently, is about the women in Nelson's life. There are also 2 love dresses which is hand made on show which women would of worn at the time. You can also see a mannequin of Nelson sitting at a table.

Opening times and admission prices as of 2019

The museum is excellent for people who are interested in not only Horatio Nelson, but what life was like at sea. It gives you detailed information about his personal and professional life. The museum is accessible to disable people and there is a lift to the upper floors. There is a small café area where you can get tea and coffee and there is also seating outside in the courtyard.

I like the fact that the museum is suitable for people of all ages as there are games for the children to play, both inside and outside. The museum suggests about 2 hours to look around the museum, but this is just a suggestion. I personally think this little museum is a hidden gem in Great Yarmouth. Horatio Nelson was certainly a very clever man. His naval career is told clearly and concisely. His personal life was, indeed, very colourful too concerning his wife and mistress. Imagine all this going on back in his day! 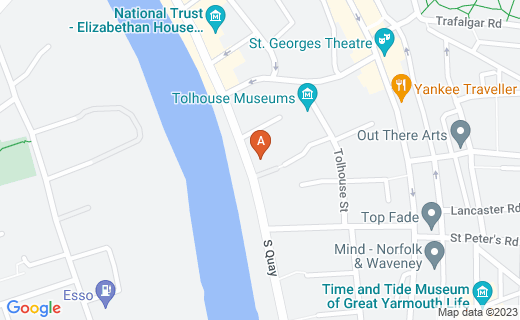