Matt is an avid traveller and self-confessed 'man of the world'. He is passionate about his home city, Manchester, & travelling the world.

The Taj Mahal of India

What is the Taj Mahal

Should you use a Guide at the Taj Mahal

It's a good idea to visit the Taj Mahal with a guide - they're informative and, if nothing else, they will take photos of you. It's useful to have someone with you who will take your Taj Mahal pictures and of course provide you with the Taj Mahal facts and the history.

You can arrange your guide before you travel but their are loads of locals also plying the trade outside the site so if you haven't arranged anything in advance, don't worry. The information the guides will give you about the Taj Mahal is very insightful and well articulated. If you have arranged your guide in advance then he/she will likely meet you at your hotel with a driver and go with you to the site. met our guide outside the entrance gates just before sunrise.

Where is the Taj Mahal? 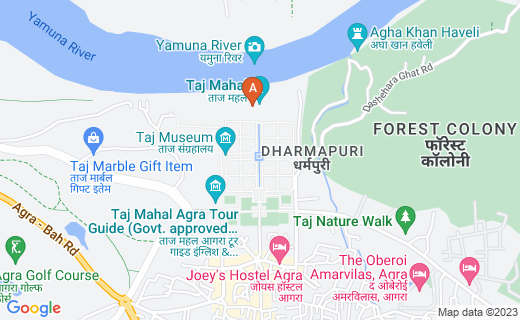 Seeing the Taj Mahal for the First Time

I was very excited on entering the site of the Taj Mahal and when it first came into view I just froze and stood gazing at it open mouthed. Then I quickly realised that there was hardly anyone else there so I went and busily took a whole load of unobstructed Taj Mahal photo's, as well as some silly one's including one of my girlfriend doing the famous Princess Diana pose imitating Princess Diana at the Taj Mahal. We weren't the only one's. When it started to get busier there were lines of people waiting to get to sit on this bench and pull the exact same pose for their own Taj Mahal pictures!

Our guide was very knowledgeable. He tried to tell me about Taj Mahal history and all about Taj Mahal architecture. He explanined to us that the building and all the grounds were designed and built with perfect symmetry. This attention to detail makes the whole Taj Mahal site just that little bit more special and is a very impressive visual. I especially loved how the Taj Mahal reflection is cast on the long pool of water immediately in front of it. But what I also found impressive is that the view of the Taj Mahal is completely unobstructed and uncompromised. At the site of some other impressive structures such as the great Pyramids of Egypt it can be difficult to appreciate the structure on its own without other modern day items disrespectfully falling into vision. However, with the Taj Mahal there has always been a ruling that nothing can be built within a one mile radius of the great temple.

Have you ever been to the Taj Mahal?

Taj Mahal
On the pages of this beautifully illustrated volume, the Taj Mahal is revealed in minute detail.
Buy Now

Who Built the Taj Mahal

We learned that after Mughal Emperor Shah Jahan had the Taj Mahal built in memory of his third wife, he had intended to have another Taj Mahal built for himself: the black Taj Mahal, to be built from black marble. This was to be built behind the Taj Mahal, across the Yamuna River but it never came to fruition. Shah Jahan was overthrown by his son, Aurangzeb, before it was started and Aurangzeb abandoned the plan.

The Tomb of Mumtaz Mahal Inside the Taj Mahal

It's possible to go inside the Taj Mahal but there's not a lot to it. In the centre of the main temple is the large white marble tomb of the Emperors third wife, Mumtaz Mahal. Photography is not allowed inside the tomb area and shoes must be either removed or covered with dust protectors. The tomb is immaculate with simple yet beautiful detailing and decoration. It's only when you're inside this area that you realise what an undertaking the whole project was just for the sake of a tomb for one person. In the 19th century parts of the structure had fallen into disrepair and it's future looked uncertain. Today, the structure has been immaculately restored and is clearly maintained very well. However, the level of Yamuna river has been falling over the last few years at a rate of 5 feet each year. This is making the land unstable and small movements underground are making the Taj Mahal vulnerable to damage. Cracks have recently started to appear over the last few years in parts of the tomb. Some experts believe that within the next 5 years there is a danger of the entire tomb collapsing.

Test your Taj Mahal Knowledge with this fun quiz!

Check out these other India Travel articles: