Athlyn Green makes her home minutes away from the Bay of Fundy. She enjoys the huge tides, rugged coastlines, and stunning vistas.

A House Trimmed in Green Inpires a Story

When we think of Marilla and Matthew, Anne and Gilbert, and the events that touched their lives, one could almost believe they were real people. Lucy Maud Montgomery's characters, with their human failings and triumphs, through the details of their daily lives in the Maritimes during the late 1800s through to the end of WWI, (and as discovered in the Green Gables books), have put a real farm on the north shore of Prince Edward Island, Canada, on the world map.

People the world over fell in love all over again with the series when it was portrayed in the Kevin Sullivan film and broadcast as a television movie in 1985 via the Canadian Broadcasting Corporation. Viewers had read all the details in the books but now they could actually see into Anne's world, a time when there was no central heating or indoor plumbing, when good, solid family values were the order of the day. The two-part miniseries earned the distinction of being the highest rated program to ever appear on Canadian television. In 1986, the film appeared on PBS in the U.S.

Megan Follows was the perfect Anne, as was Johnathan Crombie the perfect Gilbert, and who didn't love Marilla (Colleen Dewhurst) or Matthew (Richard Farnsworth)?

And, of course, there was the magic of the island and the house itself. Green Gables captured imaginations and hearts.

In 1986 work began to further restore the home to more accurately portray it, as described in the Anne books. To everyone who ever longed to return to their roots, Green Gables became a symbol of "going home" and the comfort that particular type of nostalgia brings.

"It's lovely to be going home and know it's home... I love Green Gables already, and I never loved any place before."

We visited the property in late May when they were just opening for the season, so while nothing was yet blooming, things were starting to green up. And while not truly open yet, a pleasant young lady allowed us inside Green Gables.

This article helps acquaint visitors with the house and land around it.

• The Micmac Indians who settled the island called it Abegweit, meaning, a land cradled upon the waves.

Green Gables is surrounded by forest and is situated minutes away from Cavendish Beach off the Gulf of Saint Lawrence.

Lucy Maud was born a short distance away in Clifton, now New London.

After her mother's death, she went to live with her grandparents, who lived in Cavendish, just up the road from the Green Gables farmhouse..

As many are aware, "Green Gables" had its inspiration in the actual homestead of L.M. Montgomery's relatives. The farm belonged to David and Margaret Macneill, cousins of Montgomery's grandfather, and it was just a stone's throw from the house Maud lived in with her grandparents.

Lucy Maud, living nearby, could follow the path through the woods down to the farm. She visited often, and stayed at the MacNeill homestead. It was this farm, set away in a remote corner of Canada, that fired the creation of Green Gables and the story of an orphan girl who finally found a place she could call home.

The actual Green Gables House, as well as the site of the author's Cavendish home have received the 2005 designation as part of Lucy Maud Montgomery's Cavendish National Historic Site.

With the Passage of Time, the Island Received a Number of Names

A Visit to Green Gables

After a turn-in from the highway, visitors follow a lane to the parking area. From the parking lot, one can enter the grounds. Some of the first buildings to be seen are the outbuildings.

Green Gables Barn--inside the barn, interpretive displays guide visitors through farm life of the time, with an overview of the history of Cavendish. An award-winning film, "A Celebration of Imagination - the Life of L.M. Montgomery" chronicles events in the author's life.

The outbuildings accurately reflect farm buildings of the period. Visitors can view the barn, a granary, and the woodshed. These buildings are a close match to the farm Montgomery would have known and loved, while growing up nearby.

A Visitor Center offers an audio-visual presentation, which details the the history of the site, with an exhibit highlighting the life and writings of L.M. Montgomery.

"I'd rather walk calmly along and do without flying and thud."

Restoration Efforts Have Added More of the Anne Factor

Next, visitors see Green Gables House, which has been restored to a typical farmhouse of the late Victorian period. A walk through the house is like a walk through the late 1800s and one can't help feel a sense of appreciation for being able to take a step back in time and experience what it was like to live then. You don't just "see" Green Gables, you "feel" it.

By utilizing photographs taken by L.M. Montgomery, Parks Canada curators were able to choose accessories, curtains, wallpaper, and carpets for Green Gables and perhaps this is why visitors have the sense that they have been transported back to Anne's time.

When walking through the house, you almost expect to see Marilla or Matthew or Anne and there is almost a feeling of sadness that they aren't there to share time with you.

The Parlor--a Room Mathew Wouldn't Have Stepped Foot in

The sitting room at Green Gables where Anne would have entertained Diana and served her what she thought was raspberry cordial.

Since 1936, the Macneill Home (Green Gables Farm) and the surrounding acreage (Prince Edward Island National Park) have been maintained by Parks Canada.

The bedroom as described in the Anne books, even to a dress with puffed sleeves.

I enjoyed reading this book and found it was like stepping through an invisible doorway and into Anne's world. With wallpaper of the period trimming the pages, and offerings and activities, as mentioned below, this treasury has lovingly recreated Anne's life at Green Gables in what is truly a special commemorative volume.

A must-have for those who love the Land of Anne.

If you were out in a great big woods with other trees all around you and little mosses and June Bells growing over your roots and a brook not far away and birds singing in your branches, you could grow, couldn't you?"

"The island is the bloomiest place ... I've always heard that Prince Edward Island was the prettiest place in the world."

The creek and woods near to Green Gables were explored and loved by Lucy Maud, the sandy beaches and red sandstone cliffs nearby touched her soul, and these natural places of beauty played a part in the story and in the movie.

She described them so eloquently and thus stirred the imaginations of her readers. It was this coupling of memorable characters with memorable natural places that drew in a vast audience.

Just as Lucy Maude did while growing up, visitors can enjoy the sights and sounds of "Anne's world" today.

"It'll be three years before I finish medical school. Even then there won't be any diamond sunbursts or marble halls."

Make sure to read the interpretive signs for insights about L. M. Montgomery.

In the woods I like to be alone for every tree is a true old friend.

A brook was laughing to itself in the hollow. Brooks are always in good spirits... those gay vagabonds of the valleys.

Anne, From Her Bedroom Window, Would Have Looked Out Over This

The home is situated on a hill that slopes down to a creek. The Haunted Wood, as portrayed in the stories, goes up on the other side.

Special Places Anne Loved in and Around Green Gables

Lucy Maude incorporated many actual places on the island and these occur in her books, with different names. What are some of these?

If You Can't Get to the Island, Why Not Take a Virtual Tour? Explore Lover's Lane & the Haunted Woods 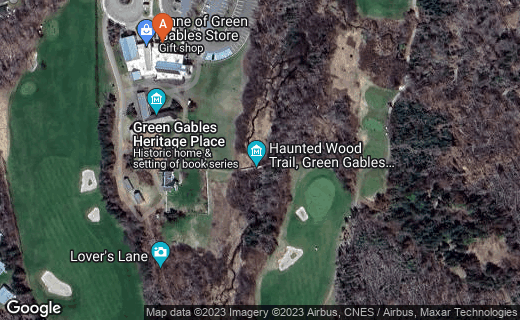 Soon after publication of the first book in 1908, people began visiting Prince Edward Island and Cavendish in search of Green Gables.

Getting to Green Gables

Green Gables is located on Route 6 in Cavendish (Avonlea in the Anne books) on Prince Edward Island. Head north from Charlottetown and follow Route 2 west to Hunter River. Turn right onto Route 13 to the intersection of Route 13 and 6 in Cavendish. Turn left from Route 13 onto route 6. Green Gables is located on the left, a short distance from the intersection.

It's a pleasant drive northward with fields and glimpses of water at every turn. Travelers will see plenty of road signs pointing the way. The route is well-marked.

The Land of Anne 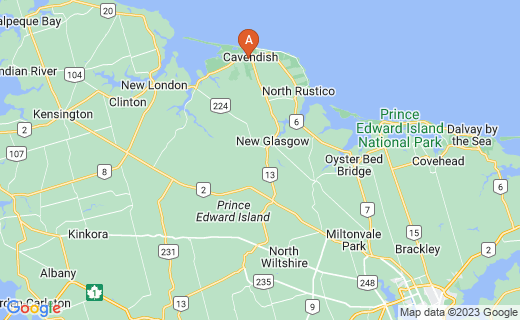 Cavendish Beach is minutes away from Green Gables House, allowing visitors to view the landscape that inspired the Anne books. Located on the North Shore of Prince Edward Island, Cavendish beach fronts the Gulf of St. Lawrence and is in Prince Edward Island National Park. It extends 8 km from New London Bay in the west to the red sandstone cliffs in Cavendish East. Expect to see the Lake of Shining Waters, sand dunes, and sand that stretches for miles.

Naturally, the shore was part of my life from my earliest consciousness. I learned to know it and love it in every mood. Red Cliffs border the Shore Drive, where Marilla and Anne drove in the buggy to see Mrs. Spencer

Have You Visited Green Gables?

Order of the Books

A Must-See if You Are in Atlantic Canada

For those who visit the Island, there's much to see and do, and setting aside a day or more is a good idea, in order to fully experience and enjoy the farmhouse with the bright green shutters and a gable, and areas nearby, where it all began.