Sushma Webber lives in New Zealand and has traveled around the country for more than 10 years. She loves to share her experiences. Planet earth is a place where wonders never cease. It seems to have a life of its own that cannot be perceived by the limited mind of the human being. When we think of our life span we think 80-100 years. The Earth's life-span is beyond imagination. Though scientists can tell us how old the Earth is, however, since it is measured in millions of years, it is just a number for us.

There are so many things that have happened even before humans started living on this planet. Volcanic activity and the moving of the oceans in the southern hemisphere has resulted in revealing some spectacular limestone formations underground. One of such nature's wonders is found in the Waitomo district in the North Island of New Zealand. Here you will find nearly 300 caves formed as a result of the activities of the nature on Earth in the last 30 million years.

Waitomo is 2.5 hours by road from Auckland and around one hour from Hamilton. These caves are world renowned for a species of glowworm, the arachnocampa luminosa, unique to New Zealand.

These dark, still caves reveal tiny lights in the roof of the caves which is a sight to be remembered. It is amazing how a tiny larva of a two-winged insect can create its own light to attract its food. A trip through the Waitomo Glowworm Caves in a boat on the underground river takes us through some amazing sights. In the silence in the depths of the earth life goes on for the glowworm.

To get to the underground river we have to walk through limestone caves with high ceilings, damp rock faces, stalactites on the roof and stalagmites growing steadily for the last thousands of years. There are many interesting formations to observe, many familiar forms which our imagination hints at and little pools of water. 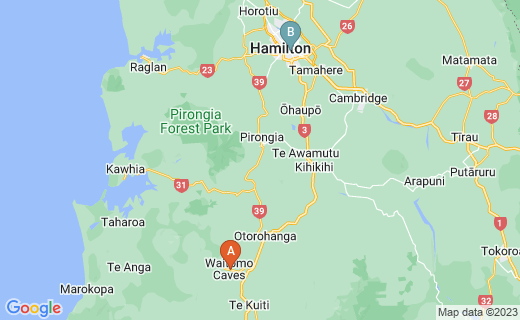 What is the intelligence that works behind the ability of a tiny worm to create sticky feeding lines like a spider, arachno, to catch insects that come into the cave because of the river that flows into the cave? How does the glowworm know that it should create its trap in a cave with a fairly flat ceiling where there is hardly any breeze?

Isn't it amazing that these tiny larvae that grow into insects, can produce light which not only attracts the prey but also acts as a defense mechanism against predators. It survives in this larva stage for nine months after hatching before becoming a pupa. The life of an adult fly is only three days. It does not have digestive system and cannot eat. In this short time it has to mate and lay eggs so the cycle continues.

Waitomo caves are also famous for the amazing limestone formations. Can you imagine water dripping from the roof for millions of years depositing limestone crystals and forming stalactites and stalagmites? Stalactites are formed from the roof and the water dripping from the edge forms the stalagmites which grows from the ground and when they meet they form what are called pillars or columns. The limestone formations can be seen in the Aranui Cave and other caves.

Limestone or Calcium Carbonate is a sedimentary rock which is composed of the skeletal fragments of marine creatures. It is soluble in water hence the action of rivers, rain and dripping water in the underground caves results in these formations. This rock was formed under the ocean and when the waters receded the access to the Waitomo caves was possible. These caves were first explored in 1887 by a local Maori chief and an English surveyor. They were not aware of the caves having access from the land and so entered the caves from the river. Adventure Activities in the Caves

The Waitomo Caves offers an array of caving and adventure experiences. For the adventurous traveler there are opportunities for abseiling, caving, black water rafting and rock climbing.

Raft down underground streams or descend into the darkness from above by abseiling into the depths of the earth to experience unspoilt nature or zoom on the flying fox through the cave. Try the cave crawl at the Waitomo Caves Discovery Centre.

How to Get to Waitomo

Waitomo is centrally located and is within 2-2.5 hours from Auckland, Taupo, Rotorua and Mount Ruapehu. The nearest major city within one hour's driving distance is Hamilton. There are also daily bus tours available from Auckland.

Links to Plan Your Trip to Waitomo