Stepping back in history for a weekend in Charleston, South Carolina means that you can enjoy a slower pace with all the Southern style. I recommend planning a long weekend in order to have plenty of time to explore this charming city and appreciate some of the nearby activities.

The city of Charleston is surrounded by a combination of islands (James, John's, Daniel) so if you are driving, be prepared to cross the many bridges in the area. The center of Charleston or the downtown area serves as a good starting point. The first impression of the downtown area is that it is dotted with churches and parks. Marion Square is featured on the map below and you will find it at the intersection of King Street and Calhoun. Parallel to King Street is Meeting Street with several house museums that were built in the early 1800's as well as the Charleston Area Visitor Center. Grab your morning coffee and head out for the sites.

King Street is a great place for a walking tour of the old historic homes plus the many antique shops and restaurants that offer a variety of tastes. You will find a free trolley service serving the downtown area if the walking distance is not manageable.

My recent visit included a stay at the historic

Francis Marion Hotel. Named after the famous Revolutionary War General also known as the “Swamp Fox”, who later served as a senator for South Carolina. The hotel was opened in 1924 and still stands as a grand hotel carrying the elegance of its time. The hotel is 12 stories high and offers some terrific views of the harbor and parks nearby. The hotel faces Marion Square which is the center of activity for many downtown events such as the farmers market.

The Southern cuisine could fill up more than just a weekend by exploring such restaurants as Cru Cafe' and the Charleston Grill. If you are short on time and want to combine a tasty meal with some food souvenirs, then try an afternoon at Southern Season. This culinary store is located at 730 Coleman Blvd. in Mount Pleasant, a short 10 minute drive from downtown Charleston.

Southern Seasons is a great stop for gourmet food gifts, cooking classes and a full selection of coffee, teas and beer and wine. In addition to the shopping list, stop and have lunch at Southerly Restaurant and head for the patio seating. There is a full menu of southern favorites offered by Chef Chad Billings plus the relaxing garden setting will help you recoup from all that site seeing.

This "culinary mega" originated in 1975 with its first store in Chapel Hill, NC and fortunately has expanded to Charleston. Future store expansions will include the cities of Charlotte, NC and Raleigh, NC. The store and restaurant will give you a sweet break along with an opportunity to select some gifts to bring home such as a local favorite Benne Wafers (crisp cookie wafers).

During the months of April through November there is a Saturday Market held at Marion Square from 8 a.m. to 2 p.m. Food vendors and artisans fill the sidewalks surrounding the park and there is live music and a play area for children. Fresh produce, bakery goods, scented soaps are just a few of the homemade treats. There is something for everyone, including treats for the family dog. Admission is free and there is plenty of food to sample while you shop.

If you have a rental car and want to extend your exploration, there are several beach locations to explore such as Folly Beach and

Kiawah Island. This will be about a 25-30 minute drive from the downtown area and is a golfers mega. Check the link above for events and other activities, there are plenty of shops and restaurants in the area after you enjoy the beach time.

Since this first visit was just a weekend trip, many of the local sites that we missed will have to fit into the future. For example, there should be a visit to Fort Sumter and The Citadel for history buffs as well as a tour of The Charleston Tea Plantation.

View from the hotel 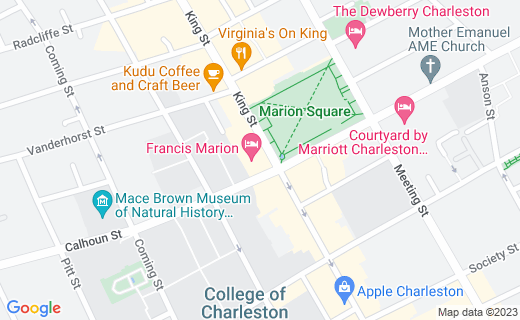 Have you visited Charleston?